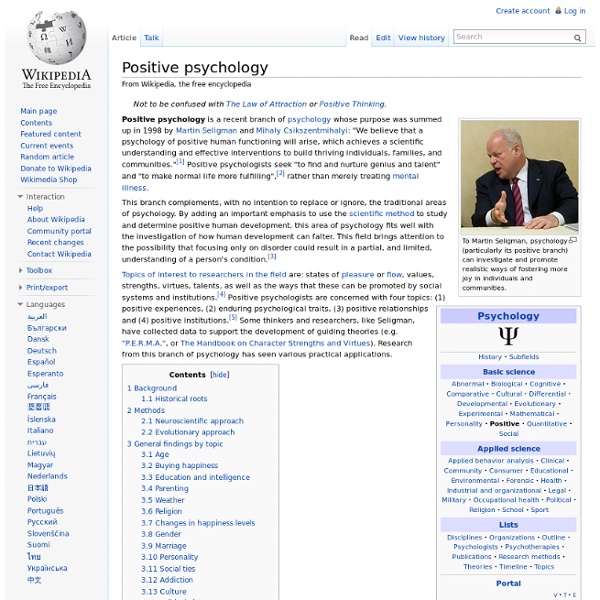 To Martin Seligman, psychology (particularly its positive branch) can investigate and promote realistic ways of fostering more joy in individuals and communities. Positive psychology is a recent branch of psychology whose purpose was summed up in 1998 by Martin Seligman and Mihaly Csikszentmihalyi: "We believe that a psychology of positive human functioning will arise, which achieves a scientific understanding and effective interventions to build thriving individuals, families, and communities."[1] Positive psychologists seek "to find and nurture genius and talent" and "to make normal life more fulfilling",[2] rather than merely treating mental illness. Positive psychology is primarily concerned with using the psychological theory, research and intervention techniques to understand the positive, adaptive, creative and emotionally fulfilling aspects of human behavior.[3] Overview[edit] Research from this branch of psychology has seen various practical applications. The goal[edit]

Employee motivation. Motivation in the workplace- theory and practice Employee motivation, the organizational environment and productivity The job of a manager in the workplace is to get things done through employees. To do this the manager should be able to motivate employees. Optimism Berlin Wall Monument (West view) – the west side of the Wall is covered with graffiti that reflects the hope and optimism post-1989 The word is originally derived from the Latin optimum, meaning "best." Being optimistic, in the typical sense of the word, ultimately means one expects the best possible outcome from any given situation. This is usually referred to in psychology as dispositional optimism.

Personality psychology Personality psychology is a branch of psychology that studies personality and its variation between individuals. Its areas of focus include: Construction of a coherent picture of the individual and his or her major psychological processesInvestigation of individual psychological differencesInvestigation of human nature and psychological similarities between individuals Free self help psychology videos How to Wake Up Bright and Breezy Published 06 October, 2011 | Sleep Problems Have you ever noticed that the average amount of sleep people seem to need is always 'five more minutes'? The dreaded alarm goes off or your partner yells at you to WAKE UP! And it's "just give me five more minutes" - as if 300 more measly seconds will replenish the awakener all they need for the day ahead.

Why do some people enjoy life and others don't? Propose a movement whose aim is to bottle happiness so it can be dispensed to one and all, saving humanity from a future of chronic misery, and you might expect at least a few people to roll their eyes. But, starting tomorrow, Britain's most prestigious scientific institution, the Royal Society, will host a meeting for some of the world's top psychologists who have done just that. Over two days, they will discuss "the science of wellbeing". Their aim is to find out why it is that some people's lives go so right. What is it that makes them happy and fulfilled, while others seem doomed to founder in misery, dissatisfaction and dejection? As the psychologists converge on London, some, though dutifully upbeat, admit that the public could be forgiven for getting the wrong idea about the meeting.

Guided imagery The practitioner or teacher may facilitate this process in person to an individual or a group. Alternatively, the participant or patient may follow guidance provided by a sound recording, video, or audiovisual media comprising spoken instruction that may be accompanied by music or sound.[16][17][18][19][20][21][22][too many citations] Mental imagery in everyday life[edit] Two ways of generating mental imagery[edit] There are two fundamental ways by which mental imagery is generated: voluntary and involuntary.

Quality of life Well-being or welfare is a general term for the condition of an individual or group, for example their social, economic, psychological, spiritual or medical state; high well-being means that, in some sense, the individual or group's experience is positive, while low well-being is associated with negative happenings. In economics, the term is used for one or more quantitative measures intended to assess the quality of life of a group, for example, in the capabilities approach and the economics of happiness. Like the related cognate terms 'wealth' and 'welfare', economics sources may contrast the state with its opposite.[1] The study of well-being is divided into subjective well-being and objective well-being. Learning Play has been approached by several theorists as the first form of learning. Children experiment with the world, learn the rules, and learn to interact through play. Lev Vygotsky agrees that play is pivotal for children's development, since they make meaning of their environment through play. 85 percent of brain development occurs during the first five years of a child's life.[6] The context of conversation based on moral reasoning offers some proper observations on the responsibilities of parents.[7] Types of learning[edit] Non-associative learning[edit] Non-associative learning can be divided into habituation and sensitization.

How to Stop Negative Thinking in 7 Simple Steps I thought he'd be pleased, I really did. But negative thinking can darken a cloudless day, bring down an uplifting event, and dampen a simple pleasure. He'd won a lot of money and had been pleased...for a while. frederick herzberg motivational theory, motivators and hygiene factors, free herzberg diagrams home » leadership/management » frederick herzberg motivational theory Frederick Herzberg's motivation and hygiene factors Frederick Herzberg (1923-2000), clinical psychologist and pioneer of 'job enrichment', is regarded as one of the great original thinkers in management and motivational theory. Frederick I Herzberg was born in Massachusetts on April 18, 1923. His undergraduate work was at the City College of New York, followed by graduate degrees at the University of Pittsburgh. Herzberg was later Professor of Management at Case Western Reserve University, where he established the Department of Industrial Mental Health.