Philosophers and Their Works 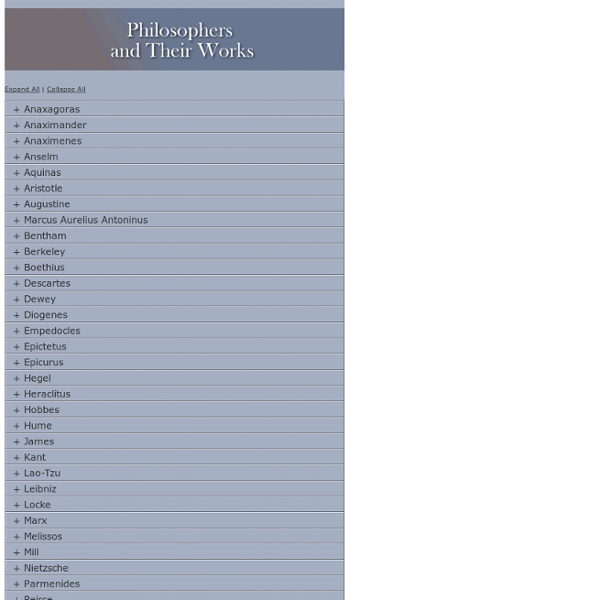 Does the comfort of conformity ease thoughts of death? - life - 25 February 2011 AS THE light at the end of the tunnel approaches, the need to belong to a group and be near loved ones may be among your final thoughts. So say Markus Quirin and his colleagues at the University of Osnabrück in Germany. The team prompted thoughts of death in 17 young men with an average age of 23 by asking them whether they agreed or disagreed with a series of statements such as "I am afraid of dying a painful death". At the same time, the men's brain activity was monitored using a functional MRI scanner. To compare the brain activity associated with thoughts of death with that coupled to another unpleasant experience, the team also prompted thoughts of dental pain using statements like "I panic when I am sitting in the dentist's waiting room".

Learn Philosophy, from the Ancients to the Moderns, with 350 Animated Videos Philosophy is not an idle pursuit of leisured gentlemen and tenured professors, though the life circumstances of many a philosopher might make us think otherwise. The foremost example of a privileged philosopher is Marcus Aurelius, famous expositor of Stoicism, and also, incidentally, Emperor of Rome. Yet we must also bear in mind that Epictetus, the other most famous expositor of Stoicism, whom Aurelius quotes repeatedly in his Meditations, was born a slave. Against certain tendencies of modern thinking, we might hazard to believe that both men shared enough common human experience to arrive at some universal principles fully applicable to everyday life.

How to Detect Lies - body language, reactions, speech patterns Interesting Info -> Lying Index -> How to Detect Lies Become a Human Lie Detector (Part 1) Warning: sometimes ignorance is bliss. Satellite Geodesy, IGPP, SIO, UCSD NEW! SRTM15_PLUS V1 November 29, 2014 NEW! SRTM30_PLUS V11 November 29, 2014 NEW! 5 Psychological Experiments That Prove Humanity is Doomed Cracked.com's new book is now on sale. What follows is one of 22 classic articles that appear in the book, along with 18 new articles that you can't read anywhere else. Psychologists know you have to be careful when you go poking around the human mind because you're never sure what you'll find there. Ten Psychology Studies from 2009 Worth Knowing About - David DiSalvo - Brainspin Image by AFP/Getty Images via Daylife Several great psychology and neuroscience studies were published in 2009. Below I’ve chosen 10 that I think are among the most noteworthy, not just because they’re interesting, but useful as well. 1. If you have to choose between buying something or spending the money on a memorable experience, go with the experience.

Introduction to Philosophy/The Branches of Philosophy The Branches of Philosophy[edit] Western philosophy can be divided into six branches that have assumed various importance over time. Traditionally metaphysics sets the questions for philosophy. Get Anyone to Like You – Instantly – Guaranteed Get anyone to like you - Instantly - Guaranteed If you want people to like you, make them feel good about themselves. This golden rule of friendship works every time - guaranteed! The principle is straightforward. If I meet you and make you feel good about yourself, you will like me and seek every opportunity to see me again to reconstitute the same good feeling you felt the first time we met. Global Diversity and Phylogeny of the Asteroidea (Echinodermata) Discussion Fossil History Recent views on the most likely Paleozoic source for post-Paleozoic asteroids differ significantly [4], [5], [6], [111], but authors agree that the Paleozoic-Mesozoic transition marked a time of major extinction and re-diversification, thereby allowing separation in this paper based on time.

Ten Politically Incorrect Truths About Human Nature Human nature is one of those things that everybody talks about but no one can define precisely. Every time we fall in love, fight with our spouse, get upset about the influx of immigrants into our country, or go to church, we are, in part, behaving as a human animal with our own unique evolved nature—human nature. This means two things. First, our thoughts, feelings, and behavior are produced not only by our individual experiences and environment in our own lifetime but also by what happened to our ancestors millions of years ago. Second, our thoughts, feelings, and behavior are shared, to a large extent, by all men or women, despite seemingly large cultural differences.

5 Ways To Hack Your Brain Into Awesomeness Much of the brain is still mysterious to modern science, possibly because modern science itself is using brains to analyze it. There are probably secrets the brain simply doesn't want us to know. But by no means should that stop us from tinkering around in there, using somewhat questionable and possibly dangerous techniques to make our brains do what we want. We can't vouch for any of these, either their effectiveness or safety. All we can say is that they sound awesome, since apparently you can make your brain...