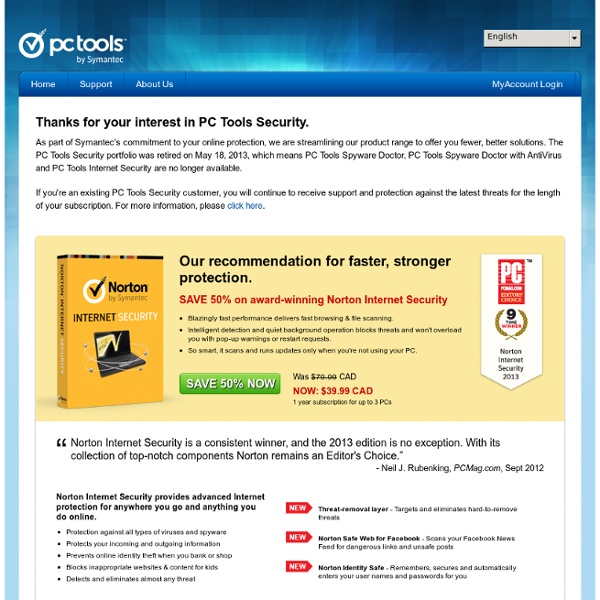 PC Tools - Submit Spyware Sample If you suspect that a product or one or more components of a product is malware, and Spyware Doctor is not detecting or completely removing it from your PC, please use this form to submit the relevant files (for example, installer files) to our MRC team for further investigation. Our team will make a thorough assessment of these products to determine if they should be identified and removed by Spyware Doctor. Note: Fields marked with a '*' are mandatory. Go to another page: MRC Home, Infection Database, Threat Levels, Glossary, Malware Dispute Form, Submit Spyware

The NSA has nearly complete backdoor access to Apple's iPhone The U.S. National Security Agency has the ability to snoop on nearly every communication sent from an Apple iPhone, according to leaked documents shared by security researcher Jacob Appelbaum and German news magazine Der Spiegel. An NSA program called DROPOUTJEEP allows the agency to intercept SMS messages, access contact lists, locate a phone using cell tower data, and even activate the device’s microphone and camera. According to leaked documents, the NSA claims a 100 percent success rate when it comes to implanting iOS devices with spyware. The documents suggest that the NSA needs physical access to a device to install the spyware—something the agency has achieved by rerouting shipments of devices purchased online—but a remote version of the exploit is also in the works. Update: Apple denies it helped build the NSA's iPhone backdoor. Appelbaum says that presents one of two possibilities: “Do you think Apple helped them with that?” Photo via Piro*/Flickr

Largest Cyber-Attack in History Hits Pro-Hong Kong Protest Websites Websites supporting the pro-democracy protesters in Hong Kong have been hit with a series of DDoS attacks which have been described as the largest in history.(Bobby Yip/Reuters) A series of cyber attacks against websites supporting Occupy Central protestors in Hong Kong have been described as the biggest cyber attacks ever recorded. Over the last few months two independent news websites which have been covering the Occupy Central protests which began in September following the announcement of a decision by China's Standing Committee of the National People's Congress on proposed electoral reform. The websites, Apple Daily and PopVote, have been vocal supporters of the pro-democracy protests and even carried out mock chief executive elections for Hong Kong. Cloudflare, a company which is employed to protect websites against distributed denial of service attacks, has revealed thatsince June, these two websites have been bombarded by attacks of unprecedented size. Who is behind the attacks?

Why the Sony hack is unlikely to be the work of North Korea. | Marc's Security Ramblings Everyone seems to be eager to pin the blame for the Sony hack on North Korea. However, I think it’s unlikely. Here’s why:1. The broken English looks deliberately bad and doesn’t exhibit any of the classic comprehension mistakes you actually expect to see in “Konglish”. i.e it reads to me like an English speaker pretending to be bad at writing English. 2. The fact that the code was written on a PC with Korean locale & language actually makes it less likely to be North Korea. here – and here – This change in language is also most pronounced when it comes to special words, such as technical terms. Lets not forget also that it is *trivial* to change the language/locale of a computer before compiling code on it. 3. 4. 5. Wired has just covered this exact point – 6. 7. 8. 9.

Siberian pipeline sabotage The Siberian pipeline sabotage refers to the alleged 1982 sabotage of the Soviet Urengoy–Surgut–Chelyabinsk natural gas pipeline by the CIA as a part of a policy to counter Soviet theft of Canadian technology. Background[edit] The Trans-Siberian Pipeline, as planned, would have a level of complexity that would require advanced automated control software, Supervisory Control And Data Acquisition (SCADA). The pipeline used plans for a sophisticated control system and its software that had been stolen from a Canadian firm by the KGB. The CIA allegedly had the company insert a logic bomb in the program for sabotage purposes, eventually resulting in an explosion with the power of three kilotons of TNT. The CIA was tipped off to the Soviet intentions to steal the control system plans by documents in the Farewell Dossier, a document collection provided by KGB defector Vladimir Vetrov. As the explosion occurred in a remote area, no casualties are known to have resulted. Raised doubts[edit] [edit]

One printer, one virus, one disabled Iraqi air defence High performance access to file storage Did U.S. infowar commandos smuggle a deadly computer virus into Iraq inside a printer? Of course not. So why does it keep getting reported, George Smith asks. A creepy enthusiasm for tales of weird weapons rises as war approaches. Denied substantive information by the Pentagon and grasping for eye-grabbing news, journalists and pundits speculate daily about what might be used in Iraq. In this environment, where everyone charges full speed ahead for the hot scoop or astonishing apocrypha, even the oldest hoaxes can return for one more bow. In a February piece for the Memphis Commercial Appeal, a retired air force man mused on the subject of information warfare and how it might be used to strike Iraq down. Special Forces men were also said to have infiltrated Iraq, where they dug up a fiber-optic cable and jammed a computer virus into it. Frankly, this is a great story. U.S. The Gulf War virus, wrote U.S. 'The Next World War' Drp yr WMDs now plse!

AF/91 AF/91 was a hoax about a computer virus which was allegedly used in the First Gulf War; its name refers to April Fool's Day. The original article appeared in InfoWorld Magazine on April 1, 1991 in article named "Meta-Virus Set to Unleash Plague on Windows 3.0 Users" by John Gantz.[1] It was purported to be an extremely early example of cyber warfare between 2 countries. In fact it was an April Fools Joke that was misunderstood by the public and media, creating a huge frenzy of media activity about the virus. History of Virus[edit] "Before the 1st Gulf War the U.S. drew up plans to take down an Iraqi anti-aircraft system with "specially designed computer viruses [to] infect the system from within. Media Stir[edit] After this article was written and published by InfoWorld Magazine, other major media sources such as U.S. References[edit]

Eight great virtual appliances for VMware, free for the downloading | Virtualization Virtual appliances are great for the same reasons physical appliances took the IT world by storm: They make deployment a snap -- even instantaneous -- while at the same time reducing costs. It's a formula that made hardware-based appliances immensely popular for network security, backup, storage networking, file services, email, and many other single-focus solutions. By leveraging open source solutions, and shedding the hardware entirely, virtual appliances can push the cost savings to whole new level: completely free. You'll find an increasing number of open source projects available for download in virtual machine formats for Xen, VirtualBox, VMware, and other virtualization platforms. [ Two of these projects -- Cacti and FOG -- are InfoWorld Bossie 2010 Award winners. In short, with the rise in popularity of virtualization and server consolidation, IT pros have many other options, options that offer all of the pros of a physical appliance, with very few of the drawbacks.