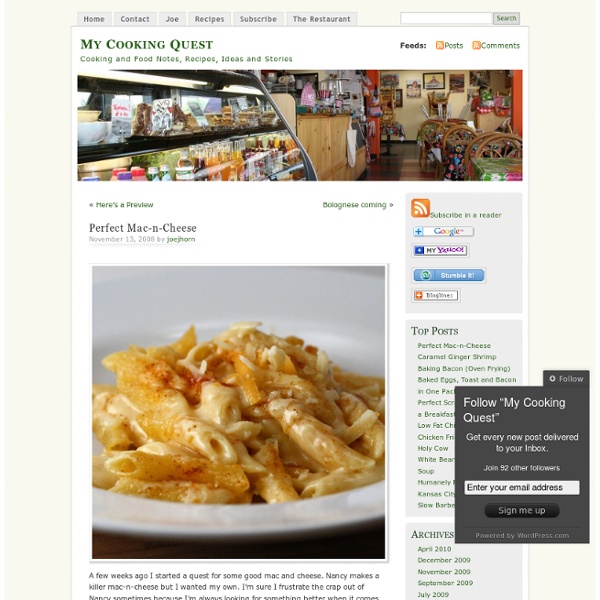 November 13, 2008 by joejhorn A few weeks ago I started a quest for some good mac and cheese. Nancy makes a killer mac-n-cheese but I wanted my own. I’m sure I frustrate the crap out of Nancy sometimes because I’m always looking for something better when it comes to food and recipes. Now mind you , this mac-n-cheese is not Bobby Flay mac-n-cheese with some crazy-sexy ingredients, but it is really, really good! I would make it for any of my friends and be proud. My first attempt was with a Jamie Oliver version that didn’t include a bechamel sauce but instead called for mixing the cooked pasta with the cheese and then baking it. The second version, I made a few nights ago for my best bud Chad, Nancy and the boys. Chad is up from San Francisco and has been visiting for the past week. Last night was particularly funny though since you can customize your player characters. Well back to the mac-n-cheese. Perfect Mac-n-Cheese (serves 4 as a side dish) Preheat oven to 350 degrees. Like this:

Garlicky Baked Fries I’m never going to make garlic potato fries any other way. These garlic fries, win hands down as the best garlic french fries I’ve ever made. Plus they are baked – so I won’t feel too guilty if I make it every time I’m craving for some potato comfort. When I read that there is garlic infused oil involved, my heart skipped a beat (in a good way, not the way oil would otherwise treat your heart). I got down to making them immediately. Unfettered F-U-N . . . Rainbow Jelly Shooter! Rainbow Jelly Shooter Its been a whirlwind at the test kitchen. The book is progressing (crossing fingers that it is going to press in early December!), we have been working on a little something (three little somethings, actually) for Saveur.com, and about a million more actions items cropping up here and there, many of which have not received appropriate attention and are currently housed in a bin marked "anxiety provoking".

Spinach Pesto Grilled Cheese Sandwich Earlier on in the week, when I made the spinach, or spanakopita pesto pasta I made sure to keep some of the pesto left over for something new. I had come across the idea of using a pesto in a grilled cheese sandwich and it was the perfect time to try one. I have been experimenting with grilled cheese sandwiches for a while now. Linguine with Garlicky Bread Crumbs With My Husband away on a business trip for a few days this week, I kept the cooking simple. Often letting the boys choose their dinner, thankfully, a vegetable was always chosen as part of the meal since they both have been learning about eating healthy foods. I don't always indulge my little men, but with Daddy away I thought I'd be extra nice to them - and, it doesn't hurt that their desires are simpler than what I normally make.

Salsa roja (roasted red salsa) « One Particular Kitchen I eat a lot of salsa. A LOT. I am rather notorious for this, in fact. My friend’s boyfriend once innocently asked if I had anything he could snack on — maybe some chips and salsa? ...stumbled upon yesterday was a list of interesting drinks. I told you guys that I'm wasting a lot of time nowadays looking at pretty pictures and interesting ideas on Pinterest.I already have a bunch of different boards for all kinds of stuff - be it food or interior design. But I especially liked the idea of someone making up Harry Potter related drinks. And then I googled the term and came up with a bunch of interesting stuff. So I'm going to share only a couple of them with you guys (I know that this won't be the favorite topic of a bunch of you, but check them all out. Maybe you'll find something you like.), because there are a LOT of them out there. These next ones are my favorites out of all the ones I saw till now.

A Two Bite Breakfast: Bacon & Eggs in Toast Cups * Updated post from archive: Originally posted March 29, 2009 If you where to ask me what is my favorite meal of the day without a thought my response would be breakfast! I love breakfast! I love brunch! I love bacon! Broccoli Cheddar Soup Comfort in a bowl. That is what this soup should be called. As Sugarcrafter, where I got the recipe, stated, I love the broccoli cheedar soup at Panera Bread. Mmm...is for Mommy: Easy Barbecued Ribs I’ve never cooked ribs before. It’s something I’ve left to the pros, like my favourite, favourite, favourite BBQ joint, Boneheads BBQ. When we were out shopping Thursday night though, there was a pretty good deal on some small packs of pork back ribs, so I decided to give it a go. Friday morning, I remembered that there was a barbecue rib recipe in my new America’s Test Kitchen Slow Cooker Revolution cookbook and I knew it was going to be what I used. Like most good slow cooker recipes, this one does have a couple extra steps, but I loved that the extra steps were after the slow cooking, not before, because sometimes my cooking skills at 8 AM are not the sharpest.

My Big Fat Italian Sandwich We had a grand time at my folk’s house at Smith Mountain Lake this past weekend. My Dad took the kids sailing on the Mirror Dinghy, they fished, swam and played, and we went to my girlfriend’s parents home for lunch and rides on the Sea-Doo. Those Sea-Doo’s are a blast! My Dad said it was an expensive day because he had to go home and get him one.