The meaning of 9/11's most controversial photo 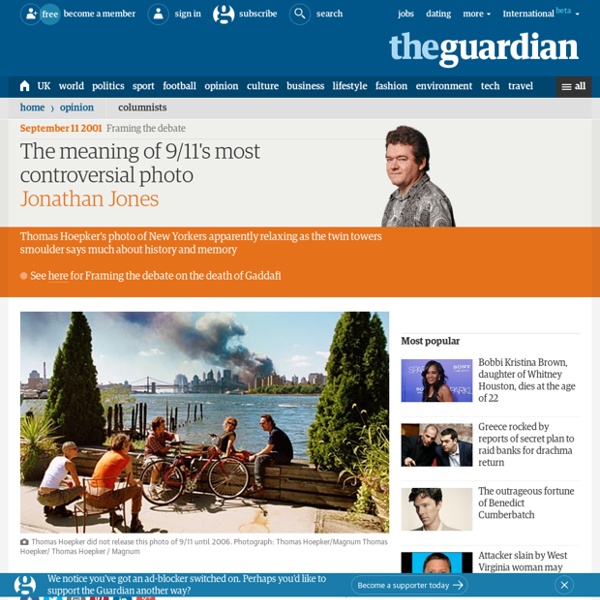 In the photograph Thomas Hoepker took on 11 September 2001, a group of New Yorkers sit chatting in the sun in a park in Brooklyn. Behind them, across brilliant blue water, in an azure sky, a terrible cloud of smoke and dust rises above lower Manhattan from the place where two towers were struck by hijacked airliners this same morning and have collapsed, killing, by fire, smoke, falling or jumping or crushing and tearing and fragmentation in the buildings' final fall, nearly 3,000 people. Ten years on, this is becoming one of the iconic photographs of 9/11, yet its history is strange and tortuous. Hoepker, a senior figure in the renowned Magnum photographers' co-operative, chose not to publish it in 2001 and to exclude it from a book of Magnum pictures of that horribly unequalled day. Only in 2006, on the fifth anniversary of the attacks, did it appear in a book, and then it caused instant controversy. Rich's view of the picture was instantly disputed.

Susan Sontag Winner of the National Book Critics' Circle Award for Criticism (1977) "Susan Sontag has written a book of great importance and originality. . . . All future discussion or analysis of the role of photography in the affluent mass-media societies is now bound to begin with her book." "After Susan Sontag, photography must be written about not only as a force in the arts, but as one that is increasingly powerful in the nature and destiny of our global society." "Not many photographs are worth a thousand of (Susan Sontag's) words." "On Photography is to my mind the most original and illuminating study of the subject." "Every page of On Photography raises important and exciting questions about its subject and raises them in the best way." "A brilliant analysis of the profound changes photographic images have been made in our way of looking at the world and at ourselves over the last 140 years."

How I shoot the moon.. I have shot a lot of moon shots with a big lens but I decided to try seeing what I could do with a "run of the mill" zoom and hand held.. Camera D90, lens 18-250mm sigma (image stabilized lens) hand held. ISO 200 F11, 1/180 sec. at 250mmI try to shoot the moon several stops UNDER exposed. Then I use increase contrast and some levels to bring the exposure back up. Doing this drives the background to sold black and gives more definition to the craters. Sergio Larrain obituary | Art and design Although he was photographically active for scarcely more than a decade and was the author of just four books (all of them now collectors' items), the stature and reputation of the Chilean photographer Sergio Larrain, who has died aged 80, continued to grow after he withdrew from the vibrant European world of street photography to live in a meditational retreat. Born into a professional family in Santiago (his father was an architect), he began by studying music. At the age of 18, he went to the US and studied forestry at the University of California, Berkeley, before transferring to Ann Arbor, Michigan, in 1954. He also travelled through Europe and the Middle East, taking a camera. In 1958 Larrain obtained a grant from the British Council to undertake an eight-month reportage project on British cities. Larrain joined as an associate in 1959 and was set a mission impossible: to photograph the mafia boss Giuseppe Russo, wanted for multiple murder by Interpol.

How to Shoot Light Trails One of the first subjects that I remember trying to capture as a teenager with my first SLR camera (film) was light trails created by cars on a busy road near my home. I’d seen this type of shot in a photography magazine and was impressed by the eye catching results. Light Trails continue to be popular subject matter for many photographers and they can actually be a great training ground for those wanting to get their cameras out of manual mode and to experiment with shooting in low light at longer exposures. Following area few examples of light trail shots as well as some practical starting point tips for those wanting to give it a go. To get more tutorials like this subscribe to Digital Photography School. Equipment: There is not just one particular type of camera and kit that you’ll need to capture light trails – however it is important to have a camera that allows you to have some control over exposure settings – particularly those that allow you to choose longer shutter speeds.

The shot that nearly killed me: War photographers – a special report | Media Adam Ferguson, Afghanistan, 2009 I was one of the first on the scene. The Afghan security forces normally shut down a suicide bombing like this pretty quickly. I was able to get to the epicentre of the explosion. It was carnage, there were bodies, flames were coming out of the buildings. I remember feeling very scared because there was still popping and hissing and small explosions, and the building was collapsing. This woman was escorted out of the building and round this devastated street corner. As a photographer, you feel helpless. When I won a World Press award for this photograph, I felt sad. Alvaro Ybarra Zavala, Congo, November 2008 The situation was very tense – people were drunk and aggressive. When I got to the hotel, I showed the other photographers. I really hate this shot. Lynsey Addario, Libya, March 2011 I had been in Libya for just over two weeks, shooting the insurgency. The first three days were very violent – I was punched in the face several times, groped nonstop.

PhotoAdvent | 25 Days, 25 Photos Why you are the future of photography | Art and design Street life ... Jon Rafman's Google Street View, Via Valassa, Rho, Lombardy, Italy. Photograph: Jon Rafman Their manifesto begins: "Now, we're a series of editors. We all recycle, clip and cut, remix and upload. From Here On is the title of this manifesto-cum-group show unveiled at last week's Arles photography festival. The manifesto was created by five people: Clément Chéroux, a historian of photography and a curator at the Pompidou Centre; Martin Parr, photographer, collector and all round dynamo; Eric Kessels, founder of the KesselsKramer communications agency; Joan Fontcuberta, an art photographer; and Joachim Schmid, an artist who works with found photographs. The internet and the cheap digital camera, they say, are radically altering how we see the world, and what we do with what we see. Feline photographer ... Among the slapdash, the crudely innovative and the downright nihilist, there are some interesting artists.

Review: myTouch phone almost replaces camera By Rachel Metz, Associated Press Updated 8/12/2011 5:24 PM SAN FRANCISCO — If you're anything like me, your cellphone and its built-in camera is always on you, while your digital camera gathers dust at home. Jeff Chiu, AP Jeff Chiu, AP This wasn't always the case. But as smartphone makers have increasingly realized the potential of the built-in camera, there's been a deluge of phones with cameras that can match — and sometimes outperform — low-end dedicated devices in a snap. A new entrant to the market should inspire some more competition in the phone camera sphere: The myTouch 4G Slide smartphone, made by HTC and available through T-Mobile. It has an 8-megapixel camera and plenty of the settings you'd find on a normal digital camera. The phone runs Google's Android operating software and costs $200 with a two-year service contract. It's also very quick to take photos. The myTouch's biggest issue, sadly, is the same one you encounter on virtually all cellphone cameras.

Silicon Startup Unveils Groundbreaking Camera The identity of Vancouver’s famous kissing couple is revealed - Puck Daddy - NHL Blog In the age of Facebook and Twitter, it was only a matter of time before the world learned the identities of the kissing couple from that now-iconic photo of the Vancouver riots. About 24 hours after photos of the smooch was passed on through emails, IMs and blog posts, the Toronto Star and the CBC are reporting that the boyfriend and girlfriend in the photograph are Aussie bartender Scott Jones and Canadian college student Alex Thomas, who was injured just before the picture was taken. The papers report that Jones and Thomas have been dating since Jones arrived in Vancouver on a "working holiday." The famous aftermath, as captured by Getty Images photographer Rich Lam: So how were Jones and Thomas ultimately identified as the unlikely "make love, not war" couple of Vancouver's embarrassing night of injury and destruction? It probably won't surprise you to learn that Facebook was involved. (Note the funny response from Scott's brother, Ryan.) So where do they go from here?

Don't let your camera get in the way of your photography My name is Nathan Presley and I’m a professional photographer. I started playing with film and photography when I was twelve years old and eventually, dropped out of high school(with good grades) at age fifteen. I’m not here to endorse quitting school by any means, but I can thankfully say it was one of the best decisions I’ve ever made. I’m not writing this post to every photographer, but primarily to those who plan to to still be shooting in twenty, thirty, or fifty years from now, and are looking to make an intentional step toward developing their skill. I receive email and Twitter messages everyday inquiring about gear I use, and although I have no problem answering those questions, I believe asking a photographer what type of camera he uses is equally as informative as asking a painter what type of brush he uses. So, let me be the first to say: what you’re looking for is not a better camera. In a world of great cameras, the idea is king.