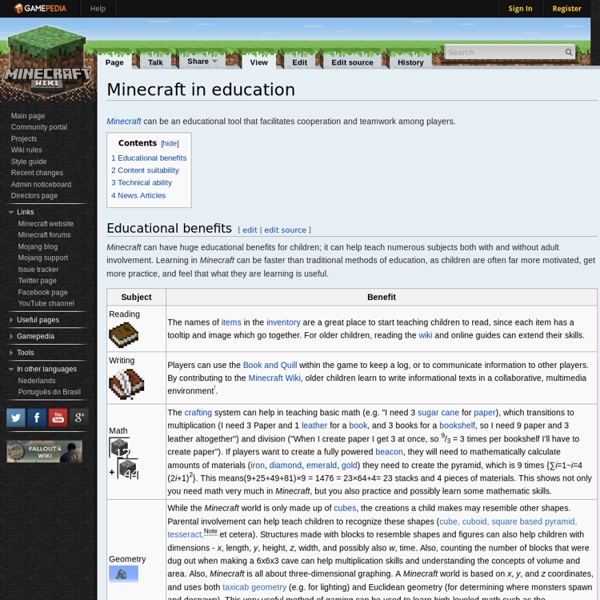 Minecraft can be an educational tool that facilitates cooperation and teamwork among players. Educational benefits[edit | edit source] Minecraft can have huge educational benefits for children; it can help teach numerous subjects both with and without adult involvement. Learning in Minecraft can be faster than traditional methods of education, as children are often far more motivated, get more practice, and feel that what they are learning is useful. Mojang has recognized the educational potential Minecraft offers, and has partnered with minecraftedu.com to provide a 50% discount on Minecraft for educational institutions. Content suitability[edit | edit source] While the mobs (enemies) may be scary or overly frustrating for younger children, singleplayer contains no coarse language unless manually typed, no sexual or drug references, no gore (except on the Strength status effect's icon, which is only a blob of reddish pixels), and dead mobs simply turn red, fall over, and turn to dust.

Ideas for Using Minecraft in the Classroom As is the nature of sandbox games, players can roam free, choosing objectives as they go. Because Minecraft has such open possibilities and potential, the teacher can choose how he or she wants to use it. Just as the student has the ability to be creative, the teacher has the same. That can be overwhelming, but luckily, there is a tool for using Minecraft created by teachers for teachers. MinecraftEdu provides a custom mod, basically a customized modification of the game, that helps facilitate organization and focus for teachers to use Minecraft effectively. In addition, Joel Levin, the founder of MinecraftEdu, provides ideas and updates at The Minecraft Teacher blog.

The Minecraft Teacher MinecraftEdu & Minecraft: Education Edition minecraftedu: As you might have already heard, Microsoft will be acquiring MinecraftEdu. You can read their announcement here. We’ll be posting FAQ on our website later today but here are some quick facts for MinecraftEdu users: You can keep using MinecraftEdu as long as you like.MinecraftEdu sales will continue normally for now.MinecraftEdu owners will be offered one year of the new Education Edition for free.MinecraftEdu Hosted Servers will keep working, and can still sign up for one.TeacherGaming won’t be going anywhere and we have new exciting plans for the future!We wanted to take the opportunity and share our thoughts on the matter. MindShift's Guide to Game-Based Learning MindShift Guide to Digital Games and Learning How can games unlock a rich world of learning? This is the big question at the heart of the growing games and learning movement that’s gaining momentum in education. The MindShift Guide to Digital Games and Learning [PDF] explains key ideas in game-based learning, pedagogy, implementation, and assessment. This guide makes sense of the available research and provides suggestions for practical use. The MindShift Guide to Digital Games and Learning started as a series of blog posts written by Jordan Shapiro with support from the Joan Ganz Cooney Center at Sesame Workshop and the Games and Learning Publishing Council.

The Minecraft Cell: Biology Meets Game-Based Learning Minecraft, the popular sandbox game, is beloved by educators for its use as a learning tool. It enables students to explore, create and imagine in a completely different way than they could ever do in a traditional classroom. The beauty of the game is in the way it unleashes the creativity of both students and teachers. But for Minecraft novices like me, it's hard to know exactly where to begin unleashing all that creativity. How Teachers are Using Minecraft for Education Can popular video games actually be used as educational games? With gamification being all the rage, it’s not such a far-fetched idea. Take Minecraft, which has over 100 million users. Over 3000 schools around the world use it for teaching (200 in the UK).

Minecraft players build working hard drives Players of the popular open-world building game Minecraft, created by Markus "Notch" Persson in 2009, continue to push the game beyond any reasonable realm of everyday understanding. These players have built working components of computers within simulations running on computers. Two such users have now revealed functioning hard drives built inside Minecraft that can read and write data. How Microsoft can use Minecraft to build its education strategy Educators had the right to feel a little freaked out about Microsoft’s announcement that it was acquiring Minecraft maker Mojang. Microsoft’s news release stated, “The Mojang team will join Microsoft Studios, which includes the studios behind global blockbuster franchises Halo, Forza, Fable and more.” Xbox head Phil Spencer’s blog said, “Minecraft adds diversity to our game portfolio and helps us reach new gamers across multiple platforms.” And Mojang’s own blog post noted, “We’re confident that Minecraft will continue to grow in an awesome way.” Not a single initial announcement noted a key – and strong – market for Minecraft: K-12 education. Which probably led teachers to turn to the formal dictionary definition of “awesome” after hearing the news: causing feelings of fear and wonder.

Teaching in the Age of Minecraft Like many 11-year-olds in Texas, Ethan had to build a model of the Alamo as a school project. Often, students make their dioramas out of paper mache or popsicle sticks, but Ethan’s teacher gave him permission to build his project in Minecraft, the popular sandbox software game in which players build structures out of blocks. With his dad’s help, Ethan recorded a video tour of his scale model of the fort, complete with explanatory signs, and posted it on YouTube. A few minutes into the tour, it started raining unexpectedly over Ethan’s diorama, but Ethan noted, "This is exactly what happened during the battle of the Alamo—it rained." To his dad—and, presumably, his teacher—this comment revealed Ethan’s familiarity and knowledge with the subject matter that he might not have had otherwise shown.