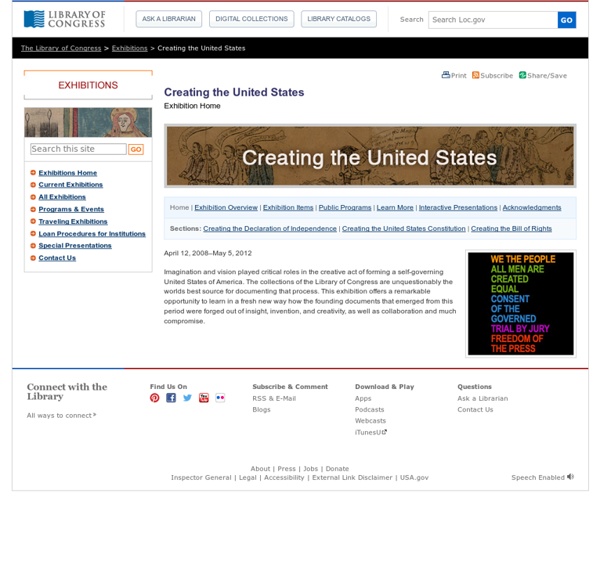 "The Bostonians paying the excise-man, or tarring and feathering." A 1774 British print depicted the tarring and feathering of Boston Commissioner of Customs John Malcolm. Tarring and feathering was a ritual of humiliation and public warning that stopped just short of serious injury. Victims included British officials such as Malcolm and American merchants who violated non-importation by importing British goods. A Closer Look at Jefferson's Declaration The New York Public Library's Manuscripts and Archives Division is honored to safeguard a copy of the Declaration of Independence penned by Thomas Jefferson. Because the Declaration was featured in the Library’s 2011 Centennial Exhibition, it will not be on display in July 2012. However, the occasion offers a chance instead for a closer look at the document through the Library’s website. In the days immediately following its ratification on July 4, 1776, Jefferson made several copies of the Declaration that had been submitted to the Continental Congress and underlined those passages to which changes had been made.

LIBERTY! . Chronicle of the Revolution . Boston 1774 Hardliners in the British government, looking for reasons to clamp down on the Bay colony, found their cause last December when the Sons of Liberty made a salty Darjeeling of Boston Harbor. 342 crates of tea were dumped into the ocean in response to a parliamentary act which imposed restrictions on the purchase of tea in the colonies. For his part, Franklin stood stoically through the ordeal, but was heard to mutter "I shall make your king a little man for this," to Wedderburn as both left the council at the end of the day. The tea party, Franklin's roasting in Parliament and now the closing of Boston harbor exemplify the hardening of positions on both sides of the Atlantic. Our Documents - 100 Milestone Documents The following is a list of 100 milestone documents, compiled by the National Archives and Records Administration, and drawn primarily from its nationwide holdings. The documents chronicle United States history from 1776 to 1965. Complete List of Documents Please note that you can always use the thumbnail images at the top of every page to navigate directly to any of the 100 Milestone Documents. home

SoJust.net: Social Justice and Civil Rights Speeches Bella AbzugPlenary Address, Fourth World Congress on Women (1995) John AdamsInaugural Address (1797) Jane AddamsThe Subjective Necessity for Social Settlements (1892)The Modern Lear (1896) National Atlas Home Page The National Map is now offering a collection of small-scale datasets that can be downloaded for free. Although the 1997-2014 Edition of the National Atlas of the United States was retired in September 2014, The National Map recognizes the importance of continuing to make a collection of the small-scale datasets, originally developed for the National Atlas, available to users. Small-scale maps have an advantage over large-scale maps when there is a need to show a large area in a single view. This makes small-scale maps an ideal solution for scientists, decision-makers, and planners needing to provide a geographical context for the research projects. Generally, certain geographical and feature details found in large-scale maps are limited or omitted in small-scale maps.

Immigration Timeline - The Statue of Liberty & Ellis Island By the 1880's, steam power had shortened the journey to America dramatically. Immigrants poured in from around the world: from the Middle East, the Mediterranean, Southern and Eastern Europe, and down from Canada. The door was wide open for Europeans. In the 1880s alone, 9% of the total population of Norway emigrated to America. After 1892, nearly all immigrants came in through the newly opened Ellis Island. One immigrant recalled arriving at Ellis Island: "The boat anchored at mid-bay and then they tendered us on the ship to Ellis Island…We got off the boat…you got your bag in your hand and went right into the building. Westerville Public Library What was the Anti-Saloon League? From 1893 to 1933, the Anti-Saloon League was a major force in American politics. Influencing the United States through lobbying and the printed word, it turned a moral crusade against the manufacture, sale and consumption of alcohol into the Prohibition Amendment to the United States Constitution. Under the motto "The Saloon Must Go," the organization worked to unify public anti-alcohol sentiment, enforce existing temperance laws and enact further anti-alcohol legislation. At first, the League appealed to local churches to carry its message to the people.

Primary Source Documents Primary Source Documents Pertaining to Early American History An invaluable collection of historical works which contributed to the formation of American politics, culture, and ideals The following is a massive collection of the literature and documents which were most relevant to the colonists' lives in America. If it isn't here, it probably is not available online anywhere. (Use Your Browser's FIND Function to Search this Library)