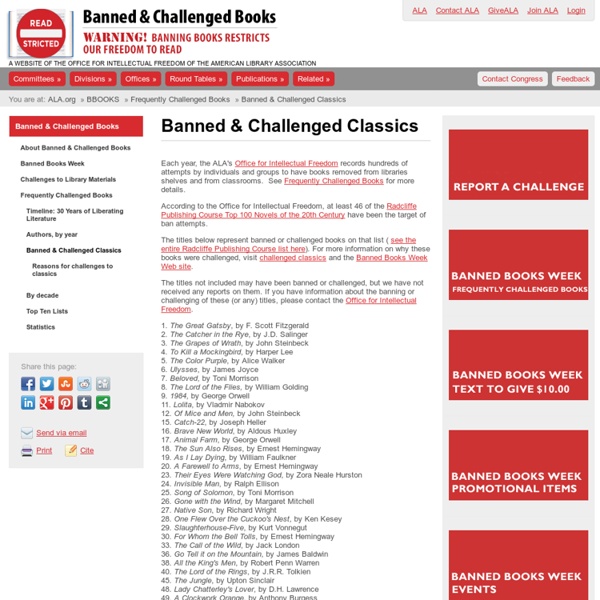 Each year, the ALA's Office for Intellectual Freedom records hundreds of attempts by individuals and groups to have books removed from libraries shelves and from classrooms. See Frequently Challenged Books for more details. According to the Office for Intellectual Freedom, at least 46 of the Radcliffe Publishing Course Top 100 Novels of the 20th Century have been the target of ban attempts. The titles below represent banned or challenged books on that list ( see the entire Radcliffe Publishing Course list here). The titles not included may have been banned or challenged, but we have not received any reports on them. 1. 11. 15. 23. 33. 36. 38. 40. 45. 48. 53. 55. 57. 64. 66. 73. 80. 84. 88. 97. Related:  FREEDOM Essay • Censorship

– USATODAY.com School is starting up again, and later this month we will celebrate another national tradition: Banned Books Week, which since 1982 takes place every year during the last week of September. It's an exciting time. There are going to be special readings of "banned books" not merely in bookstores (where the banned books will, tellingly, be for sale) but online as well. This year, explains BannedBooksWeek.org, "readers will be able to proclaim the virtues of their favorite banned books by posting videos of themselves reading excerpts to a dedicated YouTube channel." It's all so very brave and subversive! Already, news outlets are dusting off familiar stories about the scary climate of censorship in the land. "What do books from the Twilight series, To Kill a Mockingbird and Catcher in the Rye have in common?" It's a storyline the American left in particular seems to desperately want to be true. No, not true The problem: None of this is remotely true. Numbers tell it all

Why Books are Banned: Common Reasons for Censorship and Challenges of Reading Materials | Suite101.com Books have been banned all over the world for many reasons. Usually the intention is to protect people, especially children, from controversial ideas or opinions that are considered dangerous. The basis for being challenged frequently has something to do with sex, violence, religion, racial views, or profanity. The number of books challenged each year is high, numbering in the hundreds. Classics, award winning books, new publications, and even children’s picture books have all been challenged. The result of a ban is the restriction of free access to materials and thoughts. Who Bans Books Books can be challenged by any person or group that files a complaint against a teacher, school, library, or bookseller. Quite simply, anyone that wants to challenge a book may do so. Lists of Banned Books and the Reasons This is a tiny sampling of some of the books that have been challenged or locally banned or found to be objectionable by parents or community groups. Censorship of Funny in Farsi

Henry David Thoreau Henry David Thoreau (see name pronunciation; July 12, 1817 – May 6, 1862) was an American author, poet, philosopher, polymath, abolitionist, naturalist, tax resister, development critic, surveyor, historian, and leading transcendentalist.[2] He is best known for his book Walden, a reflection upon simple living in natural surroundings, and his essay Resistance to Civil Government (also known as Civil Disobedience), an argument for disobedience to an unjust state. Thoreau's books, articles, essays, journals, and poetry total over 20 volumes. Among his lasting contributions are his writings on natural history and philosophy, where he anticipated the methods and findings of ecology and environmental history, two sources of modern-day environmentalism. Name pronunciation and physical appearance[edit] In appearance he was homely, with a nose that he called "my most prominent feature Life[edit] Early life and education, 1817–1836[edit] Return to Concord, 1836–1842[edit] Later years, 1851–1862[edit]

What Is a Banned Book? A banned book is one that has been removed from the shelves of a library, bookstore, or classroom because of its controversial content. In some cases, banned books of the past have been burned and/or refused publication. Possession of banned books has at times been regarded as an act of treason or heresy, which was punishable by death, torture, prison time, or other acts of retribution. A book may be challenged or banned on political, religious, sexual, or social grounds. We take the acts of banning or challenging a book as a serious matter, because these are forms of censorship--striking at the very core of our freedom to read. The History of Banned Books A book may be considered a banned book if the work has been banned in the past. Many of the books that we consider rather "tame" today were once hotly debated works of literature. Why Discuss Banned Books?

Banned Books by Borgna Brunner "Let children read whatever they want and then talk about it with them. If parents and kids can talk together, we won't have as much censorship because we won't have as much fear."—Judy Blume Many people think that book banning is something that only happened in the past. What is a Banned Book? A banned book is one that has been censored by an authority—a government, a library, or a school system. Why Are Books Banned? As the American Library Association notes, books are usually banned "with the best intentions—to protect others, frequently children, from difficult ideas and information." Not everyone agrees on which books should be banned. Freedom of Speech and Expression The First Amendment of the Constitution guarantees our right to free speech, which includes the right to read and write books that might be considered by some to be too violent, hateful, or offensive. A Matter of Opinion Some of the towering classics of American literature have been banned, including J.

Document Archive › Satyagraha: Tracking a Cultural Exchange This essay was written for a course on Post-Colonial Indian literature in the Fall of 2006. I presented it in April 2007 at the SUNY Oneonta Undergrad Philosophy Conference, where it was given the Ninash Foundation East-West Award. Like most, if not all, philosophies, Mohandas Gandhi’s Satyagraha was not the creation of one man, but rather the culmination of the works of many men spread out over time and geographical location. This essay is a narrative history exploring the creation of Satyagraha, the movement that was used to free India from British imperialism. The goal of this piece is to draw a clear line of philosophical thought, beginning with the ancient Hindu text, the Bhagavad-Gita, continuing on to the American transcendentalist Henry David Thoreau, and ending in South Africa with Gandhi. At the beginning of this narrative history is the Bhagavad-Gita, an ancient Sanskrit text that forms one section of the Mahabharata. Non-resistance was a method. Works Cited Albert, D.

Llosa_on_literature_and_freedom.pdf The Freedom Box: Make technology that supports freedom. Turn freedom on! I've been meaning to write this post for a long time, but like many of you I've been wasting far too much time on Facebook. Facebook has been dutifully logging all of my posts, photos, personal messages etc. They mine my personal data and display ads for ham radio and electronic parts companies, Linux web hosting companies, Wordpress training and even the occasional ad for a social justice organization. Facebook's data mining software knows me as a somewhat geeky lefty. Over the last year plenty of things both good and bad have taken place using the power of both social networks and mobile devices. We've also seen the results of unfocused rage on the streets of major cities across the U.K. With the latest utterances of British Prime Minister David Cameron, the snooping measures contained in Harper's anti-crime bill, along with proposed legislation before the U.S. The question is, what can we do about this? One very important project that will help is a thing called the "Freedom Box".

Is Huck Racist? Is Huckleberry Finn really a racist book? Controversial in death as he was in life, Mark Twain has been seriously accused by some of being a "racist writer," whose writing is offensive to black readers, perpetuates cheap slave-era stereotypes, and deserves no place on today's bookshelves. To those of us who have drunk gratefully of Twain's wisdom and humanity, such accusations are ludicrous. For Twain's critics, the novel is racist on the face of it, and for the most obvious reason: many characters use the word "nigger" throughout. A closer reading also reveals Twain's serious satiric intent. "Good gracious! "No'm," comes the answer. But anyone who imagines that Mark Twain meant this literally is missing the point. "Well, it's lucky, because sometimes people do get hurt." That's a small case in point. Growing up among slaveholders, the boy naturally accepts the idea that slavery is part of the natural order. Meanwhile, Jim, as Twain presents him, is hardly a caricature. -- Peter Salwen

Schools and Censorship: Banned Books "Fear of serious injury alone cannot justify oppression of free speech and assembly. Men feared witches and burnt women. It is the function of speech to free men from the bondage of irrational fears."—U.S. Supreme Court Justice Louis D. The American Association of School Administrators and the American Library Association define censorship as: "[T]he removal, suppression, or restricted circulation of literary, artistic, or educational materials — of images, ideas, and information — on the grounds that these are morally or otherwise objectionable in light of standards applied by the censor However, our basic right — the freedom to express ourselves as we see fit — is guaranteed by the First Amendment to the United States' Constitution, ensuring the freedom to express one's opinion even if that opinion might be considered unpopular or unorthodox. But despite this, continued attempts to censor words, thoughts and opinions remain constant. Additional Resources End Notes