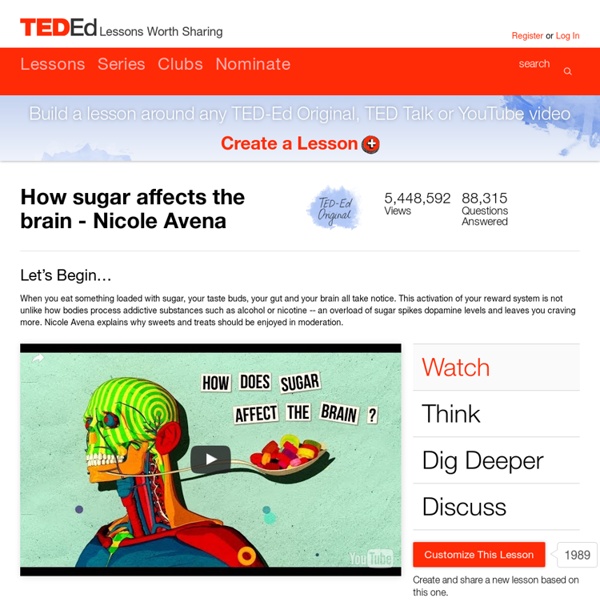 Dr. Avena’s website has links to new research and articles about the effects of sugar on the brain and behavior, and how this can influence body weight.Want to learn more about the adverse effects of sugar? Read Food Junkie, Dr. Avena’s blog on Psychology Today. Here is one post that is particularly relevant: Sugar Cravings: How sugar cravings sabotage your health, hormone balance & weight loss, by Dr. Nicole Avena and Dr. Related:  Brain research

AUDIOBOOM Podcasts Memories Can Be Inherited, and Scientists May Have Just Figured out How In Brief Our life experiences may be passed on to our children and our children's children - and now scientists report that they have discovered that this inheritance can be turned on or off. What is Epigenetics? Epigenetics is the study of inherited changes in gene expression…changes that are inherited, but they are not inherent to our DNA. The question, of course, is how are these genetic “memories” passed on? This is the question that a Tel Aviv University (TAU) was seeking to answer when they reportedly discovered the exact mechanism that makes it possible to turn the transference of environmental influences on or off. Understanding the Mechanism According to their study, epigenetic responses that are inherited follow an active process as it gets passed on through generations. “We previously showed that worms inherited small RNAs following the starvation and viral infections of their parents.

Are Psychedelic Drugs the Achilles' Heel of the Establishment? Back in 2010, I took a winter solstice themed acid trip with my lovely wife, which spawned the impetus for me finally writing my second book (which should be coming out this summer). I realized I needed to start writing said book during the trip because it was the one part of my magickal practice I had been neglecting, my magickal journal. According to some Occultists, this is the most important variable in the equation, so yeah, a pretty big oversight on my part and not something that was occurring to me at all before then. So I woke up the next day, sketched out the outline and got moving. Two and a half years later and it’s finally almost done (it only took me a year to write, finding a decent editor and getting that wrapped up has now taken me far longer, unreal). During this particular neuro-excursion I also had a fairly profound vision embed itself into my psyche seemingly out of nowhere. “People of Earth. This was my channeled communication to humanity.

It’s ‘digital heroin’: How screens turn kids into psychotic junkies Susan* bought her 6-year-old son John an iPad when he was in first grade. “I thought, ‘Why not let him get a jump on things?’ ” she told me during a therapy session. John’s school had begun using the devices with younger and younger grades — and his technology teacher had raved about their educational benefits — so Susan wanted to do what was best for her sandy-haired boy who loved reading and playing baseball. She started letting John play different educational games on his iPad. Eventually, he discovered Minecraft, which the technology teacher assured her was “just like electronic Lego.” Enlarge Image At first, Susan was quite pleased. Still, Susan couldn’t deny she was seeing changes in John. Although that concerned her, she thought her son might just be exhibiting an active imagination. Then, one night, she realized that something was seriously wrong. “I walked into his room to check on him. We now know that those iPads, smartphones and Xboxes are a form of digital drug. Enlarge Image

Susann Lange-Mechlen - Gesundheit ist nicht alles, aber ohne Gesundheit ist alles nichts. How To Learn Hacking Copyright © 2014 Eric S. Raymond The “hacking” we'll be talking about in this document is exploratory programming in an open-source environment. Hacking is primarily a style of programming, and following the recommendations in this document can be an effective way to acquire general-purpose programming skills. Note that one can be doing hacking without being a hacker. Hacking doesn't have enough formal apparatus to be a full-fledged methodology in the way the term is used in software engineering, but it does have some characteristics that tend to set it apart from other styles of programming. Hacking is done on open source. The hacking style has been closely associated with the technical tradition of the Unix operating system Recently it has become evident that hacking blends well with the “agile programming” style. Stages of Learning How To Hack Learning to compose music has three stages. The equivalent of playing scales is writing small programs, alone. The Incremental-Hacking Cycle

Practicing the top priority lexis – a quick and dirty tip I’m enjoying a Saturday lie-in with Corpus Linguistics for ELT: Research and Practice by Ivor Timmis, a great new book which arrived in my mail just yesterday. It made me think of a quick exercise that can be used as a follow-up to any reading or listening activity. It’s really simple, but since it takes a bit of technology to create it quickly, I thought I’d write a quick post. The book overviews the insights into language achieved by corpus linguistics and discusses their implications for the ELT classroom. I’m currently reading the chapter called Corpus research and grammar, and one of the main topics of the chapter is to what extent the frequency of a linguistic feature should influence the amount of time devoted to teaching that feature. One striking fact mentioned in this chapter comes from an article by Biber and Reppern. Finding and replacing the various forms of these verbs could be time-consuming, but there are tools in which one can make such a gap-fill exercise in one click.