Making the Most of Creativity 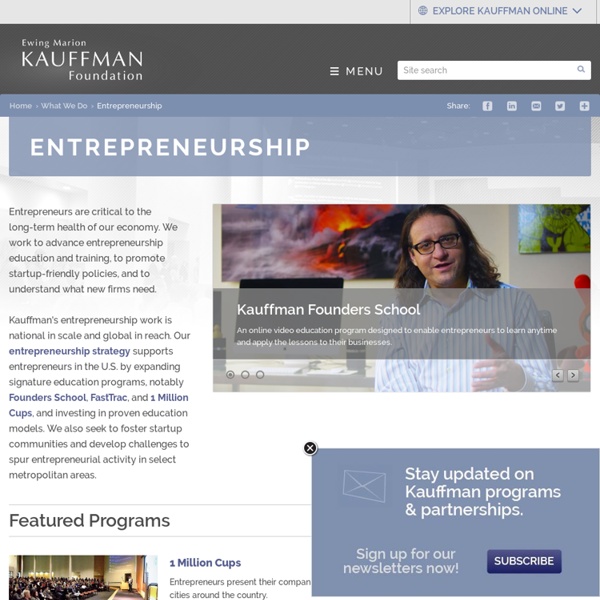 ”Normal” Jobs are a Safety Net for Entrepreneurs The right incentives can go a long way towards successful entrepreneurship. How does a functional, healthy labor market help entrepreneurs? Startup Activity Gains Momentum in Most States and Metros, According to Latest Kauffman Startup Index The majority of U.S. states and largest metropolitan areas experienced an increase in new business creation Ag Tech and Flood Response is shaping Cedar Rapids Entrepreneurial Ecosystem Entrepreneurial growth and scale since the Great Recession will undoubtedly be hot topics at the Mayor's Summit Cross-program Initiatives We support large-scale initiatives that complement the Foundation's core Education and Entrepreneurship work. Millennials and the Platform Economy As Millennials are becoming an increasing part of the adult population; how does the platform economy impact their path to economic independence? Policy Dialogue on Entrepreneurship Shifts to Growthology PDE’s Last Call Why Competition Matters

Maker Faire: Kansas City - Home Jonah Lehrer on How to Be Creative The Cost Of Creativity | Wired Science The best part of book tours are the questions. After spending years with the same ideas and sentences – they become old friends – it’s invigorating to see how people react, to keep track of which concepts spark their curiosity. It’s also fun to consider questions that never occured to me while writing the book. I muttered something incoherent about nuclear weapons and human ingenuity creating the seeds of its own destruction. One of the scientists I spend a lot of time with in Imagine is Geoffrey West, a brilliant theoretical physicist at the Sante Fe Insititute. West illustrates the problem by translating the modern human lifestyle – and we live surrounded by our own inventions – into watts. The historian Lewis Mumford described the rise of the megalopolis as “the last stage in the classical cycle of civilization,” which would end with “complete disruption and downfall.” Of course, the only solution to the problem of human innovation is more innovation.

Jonah Lehrer on How Creativity Works by Maria Popova Inside the ‘seething cauldron of ideas,’ or what Bob Dylan has to do with the value of the synthesizer mind. In his 1878 book, Human, All Too Human: A Book for Free Spirits, Nietzsche observed: Artists have a vested interest in our believing in the flash of revelation, the so-called inspiration… shining down from heavens as a ray of grace. In reality, the imagination of the good artist or thinker produces continuously good, mediocre or bad things, but his judgment, trained and sharpened to a fine point, rejects, selects, connects… All great artists and thinkers are great workers, indefatigable not only in inventing, but also in rejecting, sifting, transforming, ordering.” Some 131 years later, Elizabeth Gilbert echoed that observation in her now-legendary TED talk. The origin, pursuit, and secret of creativity are a central fixation of the Idea Age. Lehrer writes in the introduction, echoing Nietzsche’s lament: How does one measure the imagination? Share on Tumblr

9 Ways to Support Your Child’s Creativity Kids are natural innovators with powerful imaginations. And creativity offers a bounty of intellectual, emotional and even health benefits. One study found that kids’ imaginations helped them cope better with pain. Creativity also helps kids be more confident, develop social skills, and learn better. 1. But this doesn’t mean having a fancy playroom. 2. 3. 4. Again, this doesn’t mean costly or complicated trips. 5. 6. 7. Lanza and his wife don’t hover over their three boys as they play, and they also don’t enroll them in many activities. Kids learn a lot by playing on their own. He also mentioned Alison Gopnik’s The Philosophical Baby, which describes how babies’ brains work. 8. 9. Margarita Tartakovsky, M.S. is an Associate Editor at Psych Central and blogs regularly about eating and self-image issues on her own blog, Weightless.

Reflexivepractice Europe's artists can make sense of the chaos and create hope | Uffe Elbæk and Androulla Vassiliou While it is impossible to deny the severity of the present economic crisis, it is also clear that Europe has many reasons for optimism and hope. As Europeans we should start looking at our cultural sector as a reservoir of hope, ideas and new economic growth that can lead us out of the crisis. The Europe of tomorrow is only going to be as successful and liveable as the ideas we have to make it grow. We all need master what artists are already good at – making more with less, finding fresh new perspectives and exciting new combinations. Furthermore, while the crisis is economic and political, it certainly isn't cultural. In Copenhagen, a recent survey by the Danish thinktank Fora shows that the creative industry is the city's most important, with about 70,000 employed either directly in creative job positions or in businesses like fashion retail that benefit from the innovations of the creative industry.

The Right Kind of Visualisation Is what you see, really what you get? There are some wild claims out there for the power of visualisation. Things like: if you can imagine it, then it will come to you. Of course there’s always been a huge market for telling people things they want to hear, even if it’s complete rubbish. Still, visualisation can certainly be important in reaching goals. Much research has been conducted in athletics which shows the power of visualisation. There is now hardly a sport left that doesn’t have psychologists telling players to visualise their performance. Visualisation is also used in psychological therapies to help people change their behaviour. Effective visualisation So, we know that visualisations can be effective in helping us reach goals. Popular self-help books would have us believe that mentally simulating the outcome will help us achieve it. We’ve already seen the dangers of fantasising about future success. Process versus outcome The results were clear-cut. The planning fallacy

Intuition and creativity – A “pas de deux” Innovative skills The use of visual stimuli helps us to produce more and better results when we want to create something. Our ability to observe can be translated into inspiration and the best results as referred are often attributed to intuition. We know intuitively or we believe that there is a significant connection between intuition and innovation. To be creative and make our intuition works, we need however to feel some ignorance. But is it true that to create we need to have initially a certain degree of knowledge, but not much, because the abundance of knowledge can inhibit the creative process? Creativity is almost never seen without being accompanied by intuition. “Like the two dancers in a pas de deux, intuition and creativity seem almost as one. They are totally connected to the final show, so to speak. If it is true that to be creative and make our intuition works we need to feel some ignorance, what kind of learning environment we need to innovate? intuitively gifted: 1. 2. 3.