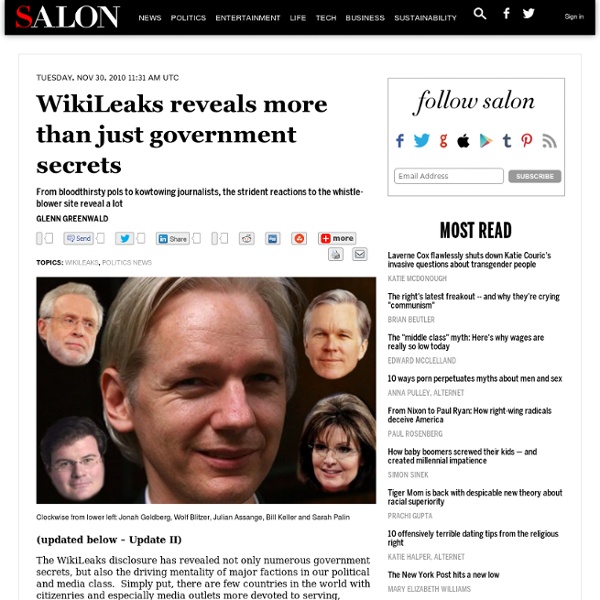 The WikiLeaks disclosure has revealed not only numerous government secrets, but also the driving mentality of major factions in our political and media class. Simply put, there are few countries in the world with citizenries and especially media outlets more devoted to serving, protecting and venerating government authorities than the U.S. Indeed, I don’t quite recall any entity producing as much bipartisan contempt across the American political spectrum as WikiLeaks has: as usual, for authoritarian minds, those who expose secrets are far more hated than those in power who commit heinous acts using secrecy as their principal weapon. The way in which so many political commentators so routinely and casually call for the eradication of human beings without a shred of due process is nothing short of demented. Those who demand that the U.S. WOLF BLITZER, HOST: Brooke, thanks very much. In sum, I seriously question the judgment of anyone who — in the face of the orgies of secrecy the U.S. Related:  Free Speech

U.S. State Department Hilariously Announces ‘World Press Freedom Day’ LOL9:51 pm December 7, 2010 The United States, which is currently engaged in a complete war against some weird guy with a website, is going to host “World Press Freedom Day,” the Department of State announced today. They’re all especially excited about protecting the flow of digital news, which is why Washington is “concerned about the determination of some governments to censor and silence individuals, and to restrict the free flow of information.” LOL. From the official announcement: The theme for next year’s commemoration will be 21st Century Media: New Frontiers, New Barriers. [U.S. Hola wonkerados. To improve site performance, we did a thing. Also, if you are a new commenter, your comment may never appear.

Will Internet censorship bill be pushed through lame-duck Congress? | Raw Story By Daniel TencerSunday, November 14, 2010 12:37 EDT A bill giving the government the power to shut down Web sites that host materials that infringe copyright is making its way quietly through the lame-duck session of Congress, raising the ire of free-speech groups and prompting a group of academics to lobby against the effort. The Combating Online Infringement and Counterfeits Act (COICA) was introduced in Congress this fall by Sen. Critics say the bill is both a giveaway to the movie and recording industries and a step towards widespread and unaccountable censorship of the Internet. Opponents note that the powers given the government under the bill are very broad. Activist group DemandProgress, which is running a petition against the bill, argues the powers in the bill could be used for political purposes. A group of academics, led by Temple University law professor David Post, have signed a petition opposing COICA. The bill is “awful on many fronts,” he wrote at Volokh Conspiracy.

75-Year Prison Sentence for Taping the Police? The Absurd Laws That Criminalize Audio and Video Recording in America January 27, 2011 | Like this article? Join our email list: Stay up to date with the latest headlines via email. Last January, Michael Allison, a 41-year-old mechanic from Bridgeport, Illinois, went to court to protest what he saw as unfair treatment from local police officers. Allison is an auto enthusiast who likes to tinker with cars, several of which he keeps on his mother's property in the neighboring town of Robinson. Allison sued the city of Bridgeport in 2007, arguing that the eyesore law violated his civil rights and that the city was merely trying to bilk revenues from impound fees. Shortly before his January 2010 court date, Allison requested a court reporter for the hearing, making it clear to the county clerk that if one was not present he would record the proceedings himself. With the request for a court reporter denied, Allison made good on his promise to bring his own audio recorder with him to the courthouse.

San Francisco Subway's Decision to Halt Cell Phone Service Fuels Criticism Free speech advocates are crying foul over the San Francisco subway’s decision to shut off cell phone service in its downtown stations to prevent a protest. The recent action drew comparisons to when Egypt first turned off cell phone and Internet service in January to thwart political activism. That struck a nerve with Americans, who asked if such a thing could happen here. Apparently, yes. With undeniably bad timing, the Bay Area Rapid Transit admitted Friday to shutting off subterranean cell phone service to prevent a protest Thursday. An attorney with the Electronic Frontier Foundation said the removal of the service to prevent political speech between protesters disregarded free speech rights. "Once BART opens a forum for expression, their authority to close it down becomes a little more limited," said Michael Risher, a staff attorney for the ACLU of Northern California.

Essex police charge man over water fight planned on BlackBerry Messenger | Media A man will appear before magistrates next month for allegedly trying to organise a mass water fight via his mobile phone. The prime minister said last week that the government would investigate whether social networking platforms should be shut down if they helped to "plot" crime in the wake of the riots. The 20-year-old from Colchester was arrested on Friday after Essex police discovered the alleged plans circulating on the BlackBerry Messenger service and Facebook. The unnamed man has been charged with "encouraging or assisting in the commission of an offence" under the 2007 Serious Crime Act, police said. He was arrested with another 20-year-old man the day the water fight was allegedly due to take place, and has been bailed to appear before Colchester magistrates on 1 September. The second man was released without charge. A police spokesman declined to disclose whether Essex police had been monitoring the service since the riots.