Jonah Lehrer on How to Be Creative 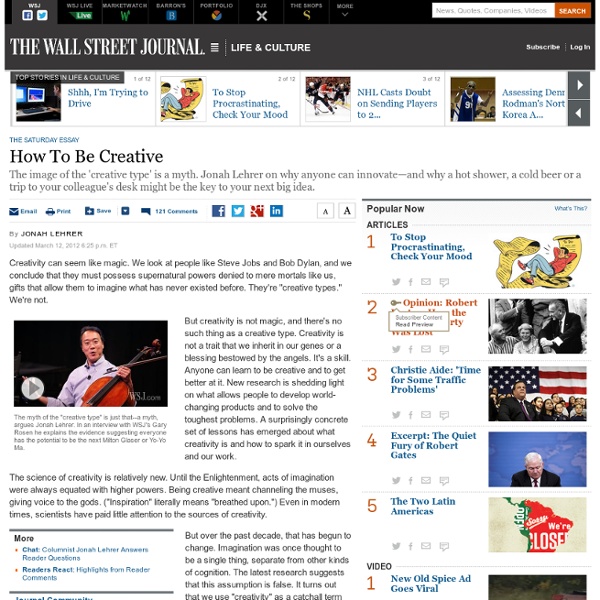 Updated March 12, 2012 6:25 p.m. ET Creativity can seem like magic. We look at people like Steve Jobs and Bob Dylan, and we conclude that they must possess supernatural powers denied to mere mortals like us, gifts that allow them to imagine what has never existed before. They're "creative types." We're not. But creativity is not magic, and there's no such thing as a creative type. The science of creativity is relatively new. But over the past decade, that has begun to change. Does the challenge that we're facing require a moment of insight, a sudden leap in consciousness? The new research also suggests how best to approach the thorniest problems. Let's start with the hardest problems, those challenges that at first blush seem impossible. Consider the case of Arthur Fry, an engineer at 3M in the paper products division. On a frigid Sunday morning, however, the paste would re-enter Mr. But then, during a particularly tedious sermon, Mr. Mr. A man has married 20 women in a small town. Mr.

The Steve Jobs Way: Seven lessons in business leadership Having spent a couple of days of my holidays reading the Steve Jobs biography I couldn't help but reflect on the remarkable accomplishments of the man and the lessons applicable for business owners everywhere, big or small. This could have been a very long list, but here are the seven things that are most strongly front of mind for me (text is paraphrased and quoted from the book Steve Jobs by Walter Isaacson, (Simon & Schuster, 2011). 1) Focus: When Steve Jobs returned to Apple in 1997 he walked back into a company with low morale, stagnant sales and little sense of purpose. He found a business with ‘tons of products most of them crap, done by deluded teams'. In trying to work out what they were all for Jobs resorted to asking a simple question 'Which one do I tell my friends to buy?'

Why is sustainability seen as a rollercoaster for business leaders? If you really want to know what's going on in the minds of executives when it comes to embedding sustainability, then look no further than the business coaches they pour their hearts out to. "I feel like I've been on a rollercoaster" is one of the most common complaints that executive coach John Blakey hears. Blakey, co-author of Challenging Coaching, suggests individuals' fears of being out of control, of failure, ridicule, isolation, being left behind, and of the sheer complexity and speed of work lives are among the biggest obstacles to driving the sustainability agenda forward. When Blakey hears the rollercoaster comment, he now tries to add in some humour: "I say, 'That sounds exciting. If I want to go on a rollercoaster, I have to go to Alton Towers and pay for it.'" "They get that things need change, they get that as leaders, they need to lead the change.

How Any Company Can Think Like A Startup Common wisdom states that startups are hothouses for creativity and innovation, while large corporations are too jammed up with bureaucracy and hierarchy to push the envelope and arrive at new solutions. It’s why more and more companies are trying to “think like a startup,” some even forming smaller divisions that can operate more nimbly and loosely within the larger structure. But is it that simple? Is simply being small and new a recipe for creative thinking, and if so, what happens when a startup gets bigger, and older (presumably everyone’s goal)? Jonah Lehrer Resigns From New Yorker Amid Scandal It’s been a rough couple of months for the science Wunderkind. Jonah Lehrer resigned today from his post at the New Yorker after acknowledging that he fabricated quotes in his most recent book, Imagine. His publisher is pulling the e-book that contains the misquotations and is halting production of physical copies. Lehrer admitted that quotes that he had attributed to Bob Dylan “either did not exist, were unintentional misquotations, or represented improper combinations of previously existing quotes.” Jonah Lehrer, the educator who admitted he wasn’t too honest with his attributions.

(Almost) Everything You Ever Wanted to Know About Creativity 1Share Synopsis To be creative can be as simple as seeing something everyone else sees, but thinking what no one else thinks about it. What does it mean to be creative? Creativity is effective novelty. The 10 Tech Terms to Know in 2013 Cognitive Radio The airways are getting crowded, thanks to smartphone and tablet data transmission that doubles every year. One solution: cognitive radio devices, whose signals automatically jump back and forth between frequencies in a fraction of a second to find open spectrum. A prototype developed at Rutgers University can switch to a new frequency in less than 50 microseconds while sending eight times the data of a typical home wireless system, taking advantage of openings on the AM and FM radio, TV, and cellular frequency bands. And Florida-based xG Technology has already set up a demo network in Fort Lauderdale, Fla., that uses cognitive radio for mobile broadband and VoIP links. Crucially, the FCC announced in September a pending rule change that will pave the way for spectrum-sharing technologies such as cognitive radio to use previously restricted frequencies.

How to Build An Innovation Leader Every organization needs an Innovation champion. This very important role requires exceptional people skills and communication skills, and the ability to be a master consensus builder among all players in the organization. Innovation champions come in a wide range of styles of interaction. Renowned psychologist Michael Kirton developed the Kirton Adaptive Innovation Inventory (KAI) as a profiling tool to measure problem-solving styles. The general characteristics of innovators are as follows: • Ingenious, original, independent, unconventional • Challenges problem definition • Does things differently • Discovers problems and avenues for their solutions • Manipulates problems by questioning existing assumptions • Is a catalyst to unsettled groups, despite their consensual views

Jonah Lehrer on How Creativity Works by Maria Popova Inside the ‘seething cauldron of ideas,’ or what Bob Dylan has to do with the value of the synthesizer mind. In his 1878 book, Human, All Too Human: A Book for Free Spirits, Nietzsche observed: Is Your Leadership Innovative? Are your leadership actions impeding innovation? Are your change initiatives successfully implemented and delivering the benefits you expected? How is YOUR behavior impacting their ability to delivery results?