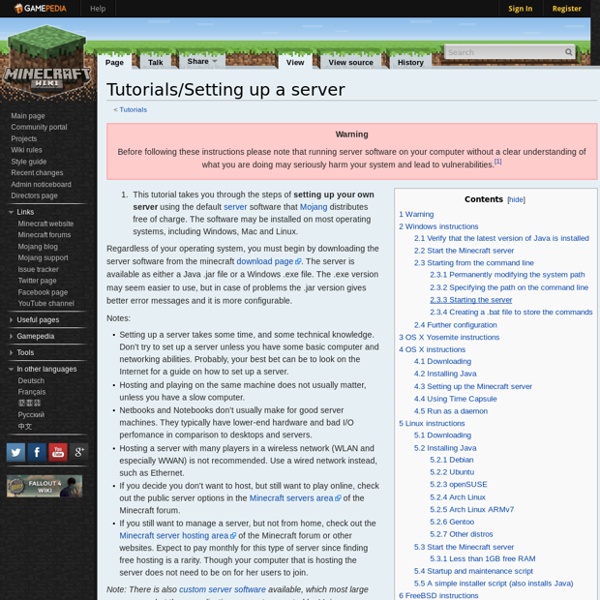 This tutorial takes you through the steps of setting up your own server using the default server software that Mojang distributes free of charge. The software may be installed on most operating systems, including Windows, Mac and Linux. Regardless of your operating system, you must begin by downloading the server software from the minecraft download page. The server is available as either a Java .jar file or a Windows .exe file. Notes: Setting up a server takes some time, and some technical knowledge. Note: There is also custom server software available, which most large servers use, but these applications are not supported by Mojang. Warning Since you're about to run your own server, you should be aware of the possible dangers. Networking in general (IP, DHCP, ports etc.)Your system configurationYour network configurationYour router configuration (if you want other people to connect over Internet) Windows instructions Verify that the latest version of Java is installed Starting the server #! Related:  Wordpress Blogging • Servertechsupport

File Server - Simple Network Attached Storage | TurnKey GNU/Linux An easy to use file server that combines Windows-compatible network file sharing with a web based file manager. TurnKey File Server includes support for SMB, SFTP, NFS, WebDAV and rsync file transfer protocols. The server is configured to allow server users to manage files in private or public storage. Based on Samba and SambaDAV. This appliance includes all the standard features in TurnKey Core, and on top of that: SSL support out of the box. Web based file manager (SambaDAV):username root (or Samba users) No default passwords: For security reasons there are no default passwords. Ignore SSL browser warning: browsers don't like self-signed SSL certificates, but this is the only kind that can be generated automatically without paying a commercial Certificate Authority. Web - point your browser at either:

Minecraft Forum - News, Forums, Mods, and Texture Packs In light of his deep love for cats, Jeb has confirmed that this baby ocelot - named "Missus Puddums", cherished mascot at EA - will now be the Lead Developer for Minecraft, going forward, following the takeover of the game by gaming industry giant, Electronic Arts. This gives Puddums final say in all design decisions, though Jeb jokingly added that he made her "promise to not sell hats." Jeb cites personal time and additional projects as reasons for his stepping down, but makes it a point to say that he will still be involved in Minecraft development. Some of the proposed changes to Mincraft include:- "Always on" DRM, to reduce account-spoofing - Monthly DLC packages - Graphics enhancement, to make Minecraft more realistic Jeb added that it was a "scary move, but I feel strangely confident. Puddums commented on the situation as well, stating that she wasn't "sure when the idea came up the first time (from Jeb), but it has been a few months now. Missus Puddums said:

Servers List - Top 100 Private Server Mass Effect 3 Weapons Guide: The Best Guns For The Right Characters Get into our Mass Effect weapons guide to figure out the best weapons for your character in . Learn which weapons are best for the different roles and learn how effectively use them on the battlefield. Now due note, that DLC and Collector's Edition guns are not included in this guide because not everyone has the money to spend for extra weapons. Assault Rifles - M-76 Revenant Submachine Guns - M-9 Tempest Heavy Pistols - M-6 Carnifex Total Weight: Power Recharge Speed +58% Soldiers are designed to be an expert in barrages of gunfire. The M-76 Revenant has a high fire rate and does a good amount of damage, however, the accuracy is really low, but with the Adrenaline Rush ability, it will increase your accuracy greatly, especially if you add the scope mod to it. The M-9 Tempest is lightweight and has a whole lot of bullets to empty out quickly. The M-6 Carnifex is highly accurate and a lethal pistol to use. Sniper Rifles: M-92 Mantis Heavy Pistols: M-5 Phalanx Shotguns: Graal Spike Thrower

Data values These data values refer to the different types of blocks and items. They are used in many, many places in Minecraft. Block IDs are used to define blocks placed in the world and inventory items (including items in chests and items dropped in the world). Item IDs are only valid for items. There are also Entity IDs for entities such as mobs and projectiles. Block data further defines blocks placed, describing for example the height of water or the direction a torch points. IDs[edit | edit source] Key Horse Variants[edit | edit source] Horse entities have variant fields that determine the markings on the horse. Variant names taken from the names of the texture file they correspond to. Summoning a horse entity without specifying the Variant value will result in a white horse. Using a Variant value that is not a true ID (all true IDs are displayed on the chart above) will result in an invisible horse. Biome IDs[edit | edit source] Enchantment IDs[edit | edit source] Status effects[edit | edit source]

minecraftinschool [licensed for non-commercial use only] / Hosting Your Own Server This page contains information about hosting your own Minecraft server. The Basics: There are several options available for educators who are interested in having their own Minecraft servers for students. Your choice will largely be based on your needs: MinecraftEDU MinecraftEDU is the easiest option for most educators who have access to a lab of reasonably up-to-date computers. When a session is over, the teacher simply saves the world using the server tool and loads it during the next class session. Pros: Easy to set up and operate. Cons: Your long-time Minecrafters may find it slightly limiting, however, the development team is constantly adding updates and custom mod support. Host Your Own 24/7 "Vanilla" or Modified Server: Hosting your own server provides the greatest deal of freedom and flexibility, however, it's also the most technical solution. Most school environments have networks that are firewalled and filtered. Another consideration is backdoor access. "Vanilla" Servers: pvp=true