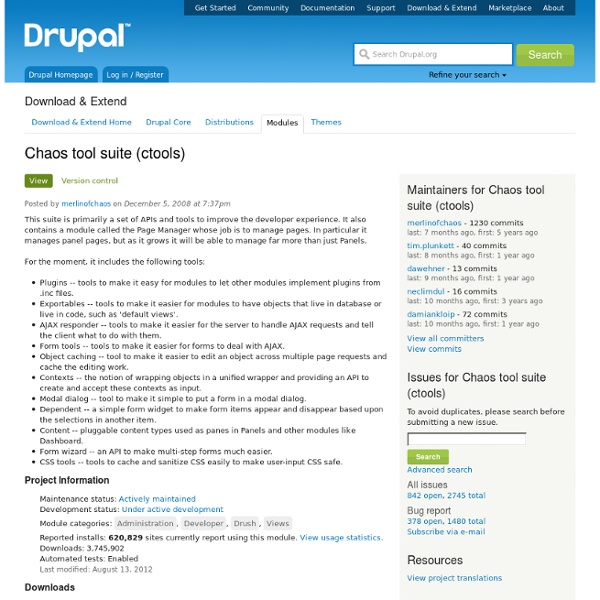 This suite is primarily a set of APIs and tools to improve the developer experience. It also contains a module called the Page Manager whose job is to manage pages. In particular it manages panel pages, but as it grows it will be able to manage far more than just Panels. For the moment, it includes the following tools: Plugins -- tools to make it easy for modules to let other modules implement plugins from .inc files. Exportables -- tools to make it easier for modules to have objects that live in database or live in code, such as 'default views'.

Views You need Views if You like the default front page view, but you find you want to sort it differently. You like the default taxonomy/term view, but you find you want to sort it differently; for example, alphabetically. You use /tracker, but you want to restrict it to posts of a certain type. You like the idea of the 'article' module, but it doesn't display articles the way you like. You want a way to display a block with the 5 most recent posts of some particular type. Views can do a lot more than that, but those are some of the obvious uses of Views. Views for Drupal 8 Views is in Drupal 8 Core! Recommended versions of Views! For new installs of Drupal 6, we recommend the 6.x-3.x branch. The 6.x-2.x branch of Views is in critical/security maintenance mode only. Dependencies The Drupal 7 version of Views requires the Chaos Tool Suite also known as CTools. Views' bug squad Views documentation Views 1 Views 2 (This link goes to the Advanced Help project page. Sponsorship Our book

Advanced help The advanced help module allows module developers to store their help outside the module system, in pure .html files. The files can be easily translated simply by copying them into the right translations directory. The entire system can appear in a popup or not as the module prefers (and by taking away access to view the popups, a site can force the popups to not exist). The system ties into Drupal's search system and is fully indexed, so the entire contents can be searched for keywords. the help files can be placed in a hierarchy as well, allowing for top down navigation of the help. By itself, this module doesn't do much; it requires another module to support it, but it does come with a nice little sample of text from Wikipedia to demonstrate the system. Accessing Advanced_help When this module is installed, users with the view advanced help index permission can access the advanced help index by going to Administer -> Advanced Help (

Entity API This module extends the entity API of Drupal core in order to provide a unified way to deal with entities and their properties. Additionally, it provides an entity CRUD controller, which helps simplifying the creation of new entity types. Requirements Drupal 7.2 or later; suggested Drupal >= 7.15 Documentation You can find documentation in the handbooks. Overview For site-builders This is an API module, so it doesn't provide any end-user features. A Views display plugin and field to render or link to any entity (by view-mode)A CTools content plugin to render any entity (by view-mode)It ships with the Entity tokens module which makes sure there are tokens for most entity properties and fields, i.e. it provides token replacements for all entity properties (or fields) that have no tokens and are known to the entity module (read about the entity property info API below). For developers Changes Credits The project has been sponsored by Maintainer Wolfgang Ziegler (fago)

Context Context Context allows you to manage contextual conditions and reactions for different portions of your site. You can think of each context as representing a "section" of your site. Think of conditions as a set of rules that are checked during page load to see what context is active. Other included modules Context UI provides an administrative interface for managing and editing Contexts. The inline editor for 7.x The inline editor has been redone for 7.x and is activated via a "Configure Layout" contextual link on blocks that appear on the page. Dependencies Required Chaos Tools 1.7 or higher Recommended for 6.x jQuery UI in order to use the Context inline editorAdmin 2.x in order to use the Context inline editor Upgrading from Context 2.x for Drupal 6.x Download latest Context 3.x and latest CTools release and place in modules directory. Drupal 6 Documentation Screencasts Video tutorial of Context 2.x by MustardSeed Media Older posts and presentations Thanks

Easy Social Easily add share buttons to your nodes! Centered in a single place, you don't need to worry in including external javascript libraries, and enabling several social modules. Despite a bunch of other social modules, this module fits exactly if you want simple share buttons without worrying about messy configurations. Easy Social is available both as blocks, attached to nodes, comments and also as a Views field. The following widgets are included by default: TwitterFacebookGoogle+LinkedIn Extend! Modules can also implement hook_easy_social_widget() to define new widget types: Example For a full description of the API with working examples, check out the documentation. Drupal 7 Version Easy Social for Drupal 7 depends on the Variable module. Drupal 6 Version The Drupal 6 version is being supported exclusively for bugfixes but no new features will be included. Maintainers The maintainers provides consulting services and paid development, e.g. for implementing a specific feature.

Weight This module adds a weight option to enabled node types. Nodes with lower weight will float to the top of lists, while heavier items will sink. You might be interested in reading Comparison of Node Ordering Modules. This is useful for sorting non-chronological nodes like bios, e-commerce products, or whatever you would like. Nodes will be sorted first by stickiness, then by weight, then by creation date. With support for 7.x, the support for 5.x ends. Version 7.x-2.x is currently the recommended and supported release for Drupal 7. Issues As with all contributed modules, when considering submitting an issue: Read the documentation (two or three times is better). Development version status The development versions (-dev, which rolls up at Noon and Midnight GMT) are where the newest stuff is, including any bug fixes and new features.

Rules The Rules module allows site administrators to define conditionally executed actions based on occurring events (known as reactive or ECA rules). It's a replacement with more features for the trigger module in core and the successor of the Drupal 5 workflow-ng module. Example use cases Build flexible content publishing workflows changesSend customized mails to notify your users about importantCreate custom redirections, system messages, breadcrumbs, ...Build an eCommerce store using Drupal Commerce And many more... Features Obviously, you may use reaction rules to react upon any event with custom conditions and actions.Allows functionality to be re-used via components (Drupal 6: Rule sets only).Flexible scheduling system that allows scheduling any component / action.Users can share their customizations by using the built-in import/export feature. Integrations Modules may use the Rules module's API to provide new events, conditions, actions or default rules, which can be customized by users.

Panels An Overview of Panels The Panels module allows a site administrator to create customized layouts for multiple uses. At its core it is a drag and drop content manager that lets you visually design a layout and place content within that layout. Integration with CTools module Panels 3 utilizes the CTools' system of "context" so that the content you place on the page can be aware of what is being displayed. Panels uses Contexts - What are they? In a Panel, you can create contexts, which represent the objects being displayed. In addition, these contexts can be checked for information and use that not only to make content available to be displayed, but to choose which layout to display! Panels also includes simpler applications of the drag and drop system. Panels can also be used for items smaller than pages. Other Features of Panels Panels supports styles, which can control how individual content panes, regions within a panel, and the entire panel will be rendered. Known Issues Status of Panels

Token Tokens are small bits of text that can be placed into larger documents via simple placeholders, like %site-name or [user]. The Token module provides a central API for modules to use these tokens, and expose their own token values. Note that Token module doesn't provide any visible functions to the user on its own, it just provides token handling services for other modules. For Drupal 6, the Token module provides a "Token Actions" module which can be enabled separately. Modules that use the Token module and provide tokens via the API include Organic Groups, Pathauto, Comment Notify, and Commerce. Pledges #D7CX: The basic token API is now a part of Drupal 7! #D7AX - I pledge to make this module as accessible as it can be.