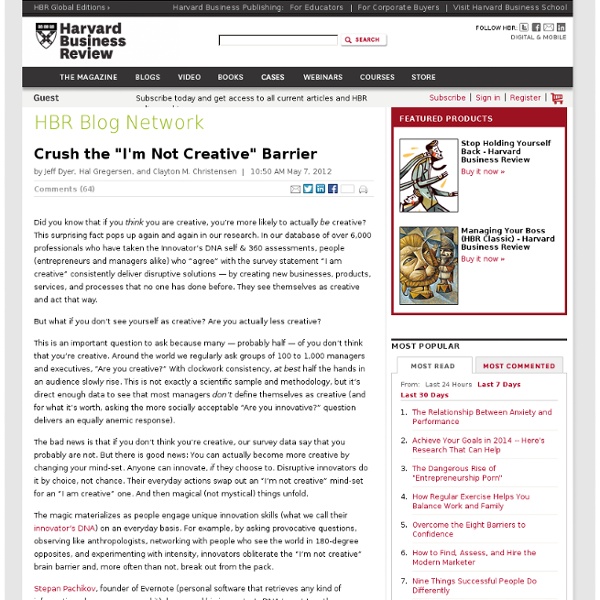 by Jeff Dyer, Hal Gregersen, and Clayton M. Christensen | 10:50 AM May 7, 2012 Did you know that if you think you are creative, you’re more likely to actually be creative? This surprising fact pops up again and again in our research. In our database of over 6,000 professionals who have taken the Innovator’s DNA self & 360 assessments, people (entrepreneurs and managers alike) who “agree” with the survey statement “I am creative” consistently deliver disruptive solutions — by creating new businesses, products, services, and processes that no one has done before. They see themselves as creative and act that way. But what if you don’t see yourself as creative? This is an important question to ask because many — probably half — of you don’t think that you’re creative. The bad news is that if you don’t think you’re creative, our survey data say that you probably are not. The result? Associational thinking: I creatively solve challenging problems by drawing on diverse ideas or knowledge.

Related:  Create • On Creativity • Create and You Will be Rewarded

Beer: creative thinking's old best friend (Photo: Raina + Wilson) Ernest Hemingway was a notorious drunkard. He’s also considered one of the 20th century’s greatest writers. With so many examples of artists overindulging, no wonder there’s a belief that alcohol plays a role in creative thinking. The matter had little proof until researchers from the University of Illinois published their findings in the latest edition of the journal Consciousness and Cognition. The researchers plied one group of male participants with vodka cranberries to get them “moderately” intoxicated. Jonah Lehrer Wasn’t the Only Journalist Shaping His Conclusions Finally and fatally, what ties the narrative together is not some real insight into the nature of Dylan’s art, but a self-help lesson: Take a break to recharge. To anyone versed in Dylan, this story was almost unrecognizable. Lehrer’s intellectual chutzpah was startling: His conclusions didn’t shed new light on the facts; they distorted or invented facts, with the sole purpose of coating an unrelated and essentially useless lesson with the thinnest veneer of plausibility. It’s the same way with the science that “proves” the lesson.

Talent or Practice – What Matters More? Gary Marcus Gary Marcus is Professor of Psychology at NYU, the author of Guitar Zero: The New Musician and The Science of Learning , and editor of The Norton Psychology Reader. Will 10,000 hours of practice make you an expert at anything? That's the uplifting message of slew of recent books, but, sadly, it's not quite true. For one thing, how long it takes to get good at something depends on what it is that you are trying to learn. You can master tic-tac-toe an hour, whereas a musical instrument can take decades.

3 Ways To Design Toys That Boost Kids' Creativity Quick, find a cardboard box, a magic marker, scissors, one roll of tape, and three everyday objects on your desk. Your task: Build an intergalactically awesome spaceship using just these parts. You have five minutes to complete this mission before this webpage 404s. 3-2-1 … go! (Seriously, you should do this--it’s fun.) Now that your ship’s out of the hangar and ready for liftoff, let’s look back on the design decisions you made along the way.

Design thinking Design thinking stands for design-specific cognitive activities that designers apply during the process of designing.[1] Overview[edit] Design thinking has come to be defined as combining empathy for the context of a problem, creativity in the generation of insights and solutions, and rationality in analyzing and fitting various solutions to the problem context.[2] According to Tim Brown, CEO and president of IDEO, the goal of Design Thinking is "matching people’s needs with what is technologically feasible and viable as a business strategy" [3] The premise of teaching Design Thinking is that by knowing about how designers approach problems and the methods which they use to ideate, select and execute solutions, individuals and businesses will be better able to improve their own problem solving processes and take innovation to a higher level. Origins of the term[edit]

Ushering In the Creative Age - Chicago Policy Review Alan Freeman writes that the age of creation lies before us—if we can rediscover the lost art of investing in humans. Alan Freeman was the principal economist in the Greater London Authority’s Economic Analysis Unit from 2001 to 2011, and now writes and advises on cultural policy. While with the GLA’s intelligence unit, he produced a series of reports that defined the field of measuring the cultural and creative industry activity of large cities. These were Creativity: London’s Core Business, the first comprehensive study of London’s cultural and creative industries, five subsequent updates, and London: A Cultural Audit, a rigorous comparison of the cultural offer of London, Shanghai, Paris, New York and Tokyo. The ‘creative industries’, a term popularized by the 1997 British labor government, are a copywriters’ dream.

18 Things Highly Creative People Do Differently This list has been expanded into the new book, “Wired to Create: Unravelling the Mysteries of the Creative Mind,” by Carolyn Gregoire and Scott Barry Kaufman. Creativity works in mysterious and often paradoxical ways. Creative thinking is a stable, defining characteristic in some personalities, but it may also change based on situation and context. Jonah Lehrer: The man with the big ideas A rising star of popular science, who has opened up the laboratory to the everyday reader, takes on the question of creativity ©Dylan Coulter When two men meet each other for the first time, there is nothing quite so easy as talking about sports to establish a comfortable rapport. So it is perhaps unsurprising that when I meet author Jonah Lehrer on an unseasonably warm Monday in March, the conversation quickly turns to American football. Just before we sit down in the downtown New York office of his publisher, the star quarterback Peyton Manning has signed with the Denver Broncos, spurning the San Francisco 49ers.

7 Hobbies Science Says Will Make Your Brain Works Smarter And Faster All parts of our body age. And our brain does too. We’ve all witnessed the natural deterioration of brain functions in older relatives. Unfortunately, they lose their short-term memories and they gradually lose the executive functions, as the right frontal lobe loses gray matter and gets “mushy.” Even without the dreaded Alzheimer’s, our brains just age. Now; however, neuroscience tells us that we can delay this process. Creative Problem Solving with SCAMPER SCAMPER is a technique you can use to spark your creativity and help you overcome any challenge you may be facing. In essence, SCAMPER is a general-purpose checklist with idea-spurring questions — which is both easy to use and surprisingly powerful. It was created by Bob Eberle in the early 70s, and it definitely stood the test of time. In this posting, I present a complete SCAMPER primer, along with two free creativity-boosting resources: a downloadable reference mind map and an online tool that generates random questions to get you out of a rut whenever you need.

Related:
Related:  Create   -  On Creativity   -  Create and You Will be Rewarded   -  STEM to STEAM   -  Why We're More Creative When We're Tired and 9 Other Surprising Facts About How Our Brains Work - The Buffer Blog   -  How To Be Creative | Off Book | PBS Digital Studios - YouTube