How to Harness Your Brain's Dopamine Supply and Increase Motivation 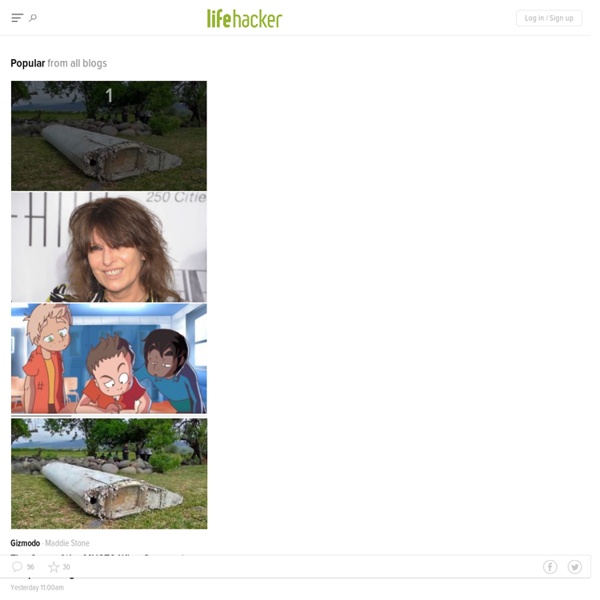 uIt took me an hour to write my opening paragraph, and it took me five minutes to write this one. The difference is more dopamine, released to my brain as I met incremental goals along the way and received positive feedback from a blank document filling with words. Understanding where motivation comes from makes it easier to recognize what you need to do when it's missing. Yup I tend to get that. A good example - yesterday I tried powering through a complex programming task by opening up a file, sticking a method in it and coding away. I was VERY easily distracted.

Making Sense of Modern Fitness Data All that data poses a singular question: Which metrics are worth paying attention to? In the former Soviet Union, global sports domination was so vital to the propaganda machine that the regime employed an army of 5,500 elite sports doctors to analyze every aspect of their athletes, from heart rates to sleep cycles to cortisone levels. “It was very complicated,” says Val Nasedkin, a Russian track-and-field athlete during the 1980s. 8 Natural Dopamine Boosters to Overcome Depression - Natural Health Advisory Natural dopamine boosters can help you take back your health! How? First, you need to understand that depression is a disease. Body Atlas Reveals Where We Feel Happiness and Shame Yellow shows regions of increased sensation while blue areas represent decreased feeling in these composite images. Image courtesy of Lauri Nummenmaa, Enrico Glerean, Riitta Hari, and Jari Hietanen. Chests puffing up with pride — and happiness felt head to toe — are sensations as real as they are universal. And now we can make an atlas of them. Researchers have long known that emotions are connected to a range of physiological changes, from nervous job candidates’ sweaty palms to the racing pulse that results from hearing a strange noise at night. But new research reveals that emotional states are universally associated with certain bodily sensations, regardless of individuals’ culture or language.

The Creative Gifts of ADHD - Beautiful Minds - Scientific American Blog Network "Just because a diagnosis [of ADHD] can be made does not take away from the great traits we love about Calvin and his imaginary tiger friend, Hobbes. In fact, we actually love Calvin BECAUSE of his ADHD traits. Calvin’s imagination, creativity, energy, lack of attention, and view of the world are the gifts that Mr. Watterson gave to this character." -- The Dragonfly Forest 10 Psychological Principles to Design With Design is most effective when executed with knowledge of psychology. Knowing how people react to visual stimuli allows the crafting of an effective design, with out psychology you are guessing. Psychology itself is a vastly fluctuating and massive subject, but that doesn’t mean you need a PhD to use it in your design. There are simple psychological principles you can use to improve the effectiveness of your design even without knowing the theory behind it. While there are hundreds of relevant principles, the following ten can be used to improve the aesthetic quality, usability and comprehension of your designs.

The Miracle and Mystery of Sleep: 12 Remarkable Psychological Studies “Sleeping is no mean art: for its sake one must stay awake all day.” ~Friedrich Nietzsche What beautiful rewards sleep delivers– if you can get enough of it. Sleep has profound effects on our memories, desires, self-control, learning, relationships and more. The Rational Choices of Crack Addicts Continue reading the main story Video Long before he brought people into his laboratory at to smoke crack cocaine, Carl Hart saw its effects firsthand. Growing up in poverty, he watched relatives become crack addicts, living in squalor and stealing from their mothers. Childhood friends ended up in prisons and morgues.

5 Ways To Rewire Your Brain For Meaningful Life Changes Neuroscientists have discovered the strategy for rewiring the brain. Contrary to popular approaches, this strategy involves more than just positive thinking or working hard. In fact, there are five pathways that must be activated in order to create new neural networks in the brain. Taste perception is influenced by extreme noise conditions Eating is a fundamentally multisensory experience: we don't just eat our food, we also see it, smell it, and hear ourselves chewing it. However, perception of non-food components of the dining experience can also influence flavor perception. For instance, desserts are rated as sweeter if they are presented on a white vs. black plate, and exposure to loud noise reduces affective food ratings. The latter result is particularly relevant to the bad reputation of airline food.

Five Psychological Principles Everyone Should Know and Use. - Monday, 17th August 2009 at 4Hoteliers Hospitality is about a 'customer-centric' mindset: Five, easy-to-learn principles can help professionals to live this mindset. The examples here focus on sales, but these principles are useful for working with anyone personally and professionally. The overarching idea is simple -- you can relate and work with people well if you know them well. Everyone with whom you interrelate on a regular basis, from coworkers to customers, is psychologically "hardwired" in a highly similar fashion. This hardwiring means that people analyze and use certain types of information in very predictable ways.

Defeating aging, and the avenues ahead of us: Part 2 With a clear way forward, what are we waiting for? If we get this done, then we can probably live indefinitely. Can humans be so mentally slothful and negligent that they would be able to do all kinds of things on microscopic scales and yet not be able to clear damage out of biology? Does anybody really think that most mitochondrial proteins can make it through the TIM/TOM complex, but that it’s out of the question for the rest of them? (Part Three) Hunter vs. farmer hypothesis The hunter vs. farmer hypothesis states that attention-deficit hyperactivity disorder (ADHD) in children and its counterpart in adults, the adult attention deficit hyperactivity disorder, have their origins in a tendency in those individuals for behaviors characteristic of hunter-gatherer societies over those of farming societies. The hypothesis was proposed by Thom Hartmann and suggest that these conditions may be a result of a form of adaptive behavior. Hartmann developed the hunter vs. farmer idea as a mental model after his own son was disheartened following a diagnosis of ADHD, stating, "It's not hard science, and was never intended to be."[1] However, more recent molecular and clinical research has given support to the hunter vs. farmer hypothesis,[2] and some researchers[3] use the hunter vs. farmer idea as a working hypothesis of the origin of ADHD.

Hardwiring Happiness Rick Hanson is a master of his craft, showing us a wise path for daily living in this book. Based in the latest findings of neuroscience, this book reveals that if we understand the brain a little, we can take care of our lives a lot, and make a real difference to our well-being. Here is a book to savor, to practice, and to take to heart. –Mark Williams, Ph.D., Professor, University of Oxford, author of Mindfulness The cultivation of happiness is one of the most important skills anyone can ever learn.