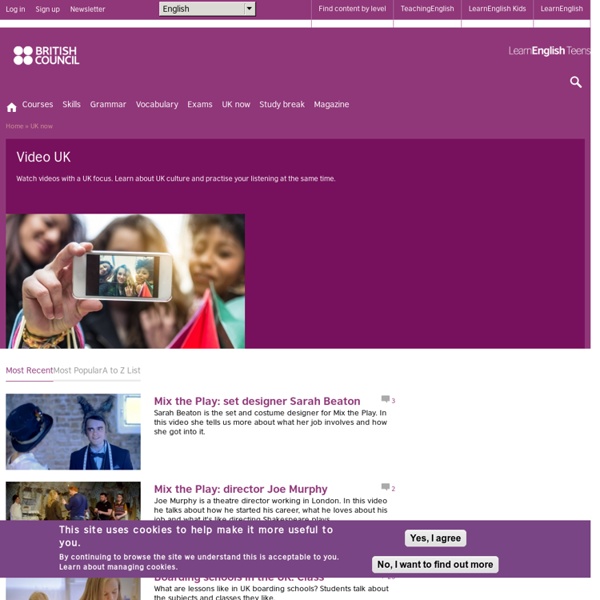 ESL Listening Comprehension Exercises: Movie clips to practice English SECTION 1: Movie Clips Learning through media (movies, music, etc.) is one of the best ways to learn a new language. The exercises below use movie clips to help you to better understand spoken English. Here's what you do: Listen, learn and teach English with podcasts in English for upper intermediate learners and teachers There are more vocabulary activities related to these podcasts on the 'extras' page. 124 British icons: Yorkshire. Join Pam and Jackie in one of the nicest parts of the UK. (18 Feb 16)

Motivating speaking activities for lower levels Planning time has been shown to increase production in speaking tasks. Lower level learners often find it especially difficult to speak spontaneously, so these activities incorporate ‘thinking time’ during which learners can prepare for speaking by planning what they are going to say, and asking the teacher or using a dictionary to look up missing vocabulary. The following activities are relatively short, with minimal materials preparation time for the teacher. Proof Swedes may actually be the toughest people on earth A brave cyclist on Wednesday morning. Photo: Jonas Ekströmer/TT Even Jon Snow would be freezing his beard off. Stockholmers woke up to an unusually snow-covered city on Wednesday morning. Photo: Vilhelm Stokstad/TT Below is a picture of a street near Gullmarsplan in Stockholm.

Where did English come from? - Claire Bowern There are two other TED-Ed lessons related to this topic: How languages evolve and How did English evolve? (a lesson that fills in some of the details that we omit here due to the fact that the focus of this lesson was further in the past). There is still a great deal of debate about Indo-European, most importantly about the location of the homeland. To read more about this debate, there are classic books by Mallory and Renfrew, as well more recent works by Anthony. Cambridge English Write & Improve It's free to start writing! Click on any of these tasks to start. You're ready to write and improve!

Study shows that people who speak two languages have more efficient brains (Bigstock) By Tanya Lewis November 18, 2014 People who speak two languages may have brains that are more efficient at language processing and other tasks, new research suggests. Scientists have long assumed that the “bilingualism advantage” — the enhanced ability to filter out important information from unimportant material — stems from how bilingual people process language. The new study confirms that assumption and goes on to suggest that bilingual people are more efficient at higher-level brain functions such as ignoring irrelevant information, said Ellen Bialystok, a psychologist at York University in Toronto, who was not involved in the research.

Grammaire de l'anglais Vocabulaire / Vocabulary Le corps humain / The human body L'habillement / Clothes La nourriture / Food How to Teach English for Engineers - UsingEnglish.com It is rather difficult to decide what English to teach to engineers. First of all, “engineer” has two rather distinct meanings, one of which is close to “technician” or “mechanic” (e.g. a photocopier repair engineer) and another which is closer to “designer”. The needs of these two groups are likely to be different, but there are also people whose jobs and training fall somewhere in the middle. Another complication is that English for Engineers courses are also often for people still in full- time education, meaning no one has any idea which kind of job those people might end up in. Then there are the numerous different kinds of engineer (marine engineer, architectural engineer, genetic engineer, etc) with wildly different fields of work and very specialist vocabulary… - Abbreviations