Do Not Track - Universal Web Tracking Opt Out 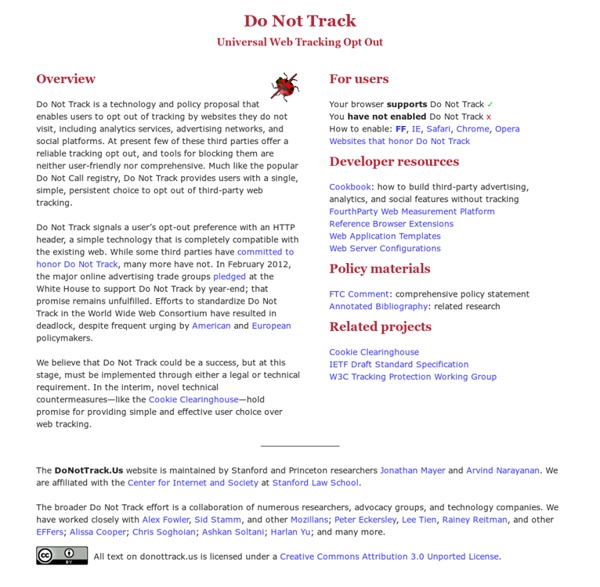 Think You’ve Disabled Google’s Web History Tracking? Check Again. Late Friday evening, I tweeted out that, for some reason unbeknownst to me, Google’s Web History tracking “feature” (the one that keeps tabs on every search you’ve made for sake of tailoring ads to your tastes and/or creeping you out) had seemingly been enabled on my account. This wouldn’t be too strange in most cases — as an opt-out service, Web History is enabled for everyone by default. The problem? I’d manually disabled it years ago. Following my tweet, a few people responded in tune; they were certain they’d disabled it long ago — but sure enough, there was all of their history going back anywhere from 6 months to a year and a half. In each case, the person is positive they’d disabled it months ago. I brought it up in our internal backchannel, and sure enough: other TechCrunch employees had seen the same thing — long ago, in fact.

Tracking Preference Expression (DNT) Abstract This specification defines the DNT request header field as an HTTP mechanism for expressing the user's preference regarding tracking, an HTML DOM property to make that expression readable by scripts, and APIs that allow scripts to register site-specific exceptions granted by the user. It also defines mechanisms for sites to communicate whether and how they honor a received preference through use of the Tk response header field and well-known resources that provide a machine-readable tracking status. Status of This Document This section describes the status of this document at the time of its publication. This document was published by the Tracking Protection Working Group as a Last Call Working Draft on 24 April 2014. The Tracking Protection Working Group invites broad community review, especially of technical requirements and dependencies. Publication as a Last Call Working Draft does not imply endorsement by the W3C Membership. Table of Contents 1. 2. Tracking context user party 3.

Use Email Alias and Forwarding in Gmail To Better Manage Your Life By this point, most people know about the nifty tricks you can use in your Gmail address called aliases, that allow you to give people different email addresses that all arrive at the same inbox. Aibek first covered this cool Gmail feature back in 2007, describing how you can place both periods and plus signs inside of your Gmail address and those emails will still be delivered like normal. In 2012, Craig described how you can use these separators to create distinct email addresses for yourself that you can hand out to different people, yet all of those emails arrive at the same Gmail inbox. On a basic level, that’s a great way to make use of these aliases. Just consider the possibilities here. Sound complicated? Here’s the thing about organization in life – it takes time, energy, and usually a computer or a smartphone. If I have my Android on me, then I’m in luck because I can get to my Gmail task list with it. Setting Up To-Do Task Reminder Aliases Here’s an example.

The Dangers of Web Tracking - The Great Privacy Debate Stop The Cyborgs | Only the unmeasured is free. Heartbleed: Which Passwords You Need to Change Credit: Paramount Pictures The Heartbleed Internet-security flaw is very bad, but contrary to many media reports, you don't have to run out and change all your passwords now. In some cases, it might be better to wait, or not do it at all. First, to be clear, you don't need to change any passwords or PINs you use to log into a Windows PC, Mac or mobile device. MORE: Heartbleed: Who Was Affected, What to Do Now Heartbleed affects Web, email and chat servers by undermining the secure connections they make with you. Furthermore, although Heartbleed was made public on Monday evening (April 7), some companies got advance warning and patched their vulnerable servers beforehand. Most companies got no advance warning, including Yahoo, which scrambled to patch its servers Tuesday even as security researchers found it was easy to see usernames and passwords as users logged into Yahoo Mail. Sites for which you will definitely need to change your password Yahoo, including Yahoo Mail and any Yahoo Group

Heartbleed: Who Was Affected, What to Do Now Credit: Codenomicon UPDATED 9:15 AM EDT Thursday to remove Twitter from list of affected sites, and add OKCupid. If you've been following the news for the past 24 hours, you've probably heard of the Heartbleed bug that's affecting the security of millions of websites. It's a big deal, with security experts using terms such as "catastrophic" and "devastating." Unfortunately, there's not a lot the end user can do to fix things. Heartbleed mainly creates problems on Web and email servers. MORE: 'Heartbleed' Bug Kills Security on Millions of Websites However, there are a few things every Internet user should do right now. Change your Yahoo, Flickr and Tumblr passwords. Like millions of other websites, Yahoo and its subsidiaries Flickr and Tumblr were vulnerable to Heartbleed. Security researchers yesterday (April 8) used Heartbleed to capture usernames and passwords as random people logged into their Yahoo Mail accounts. Consider changing your Google, Facebook and Dropbox passwords.

Google Lets Users Opt Out Of Analytics Tracking, But Doesn't Expect Many Will Google has announced the launch of a browser plugin that lets users avoid being tracked by Google Analytics. The company warned two months ago, in the midst of loud privacy-related complaints, that it was working on such a tool. Google says the plugin will work in the following browsers: Internet Explorer, versions 7 and 8Mozilla Firefox, 3.x and higherGoogle Chrome It’s not available for Safari, but Google’s Brian Richardson hinted that may change in the future by saying today’s announcement is a “first step” and that Google hopes to “build continuous improvements moving forward.” In its announcement today, Google positions this as a win for user control and privacy. It’s anyone’s guess how many web searchers will even be aware that the plugin exists, much less use it. “We’re not sure [what to expect]. On a related note, Google also announced today that website owners can tell Google Analytics to use only a portion of a visitor’s IP address for geographic reports.

Match.com will find you someone who looks like your ex New Web and email address options exploded this year with 469 new top-level domain names. Next year, Google, Amazon and 10 others will bid for rights to oversee .app. In 2014, the renaming of the Net has begun in earnest. A dramatic liberalization of the Internet address system means that people can set up websites and email addresses ending in .photography, .london, .gift, .beer and .restaurant. And since they started arriving early in 2014, the virtual land grab has begun in earnest. Starting in February, 469 of these new names arrived, says the Internet Corporation for Assigned Names and Numbers ( ICANN), a nonprofit organization that oversees the system. The addresses are called generic top-level domains (GTLDs), and their debut is part of ICANN's years-long plan to introduce new virtual real estate on the Net. With the GTLD expansion, people can identify themselves by profession -- for instance, .photography, .florist, .realtor, .pizza and .plumber. How new TLDs arrive

Change passwords: How to protect yourself against the Heartbleed bug (+Video) - San Diego Top News Does changing your passwords quickly, after the Heartbleed bug was discovered, protect your bank account, credit cards, or email accounts? The Heartbleed bug is being called by many security experts the most serious bug that has hit the Internet because it is affecting websites that were supposedly secured. According to an April 9 NPR report, the way banks and other companies protect the Internet user’s data from hackers is by providing OpenSSL. SSL stands for Secure Socket Layer and is a cryptographic protocol that puts the S in "https" – which can be seen on Web addresses whenever a user goes to a website that is secured. Just recently, it was discovered that there has been a hole in that most vital security system (the heart) and that secure information has been “bleeding” out to hackers and other cybercriminals – since March 2012. Changing passwords on websites that have not applied the available security fix still leaves Internet users vulnerable.

Tracking Yourself Online: The Power of Google Alerts | Keyword Connects Blog Think Google is just a gigantic search engine that knows everything about everything? Think again. Turn Google to your advantage to track what homeowners and competitors are saying about you online. A lot of people believe that Google sees all, knows all. They’re watching your every move online. And they know everything that the general public is saying about you. I’ll give you no argument. They’re called Google Alerts, and they’re a great tool for every home improvement company that wants to monitor how their name is used on the Web. In short, Google Alerts allow you to monitor online news, postings or pages that contain whatever keyword or phrase you would like. I recommend home improvement companies set up Google Alerts for phrases that include your company’s name, your own name and even those of your direct competitors. Think about it: now you can easily and constantly monitor your company’s name and reputation online. How do you set up a Google Alert? Go to the Google Alerts page.

NSA uses Google cookies to pinpoint targets for hacking A slide from an internal NSA presentation indicating that the agency uses at least one Google cookie as a way to identify targets for exploitation. (Washington Post) The National Security Agency is secretly piggybacking on the tools that enable Internet advertisers to track consumers, using "cookies" and location data to pinpoint targets for government hacking and to bolster surveillance. The agency's internal presentation slides, provided by former NSA contractor Edward Snowden, show that when companies follow consumers on the Internet to better serve them advertising, the technique opens the door for similar tracking by the government. For years, privacy advocates have raised concerns about the use of commercial tracking tools to identify and target consumers with advertisements. The revelation that the NSA is piggybacking on these commercial technologies could shift that debate, handing privacy advocates a new argument for reining in commercial surveillance. Google's PREF Cookie