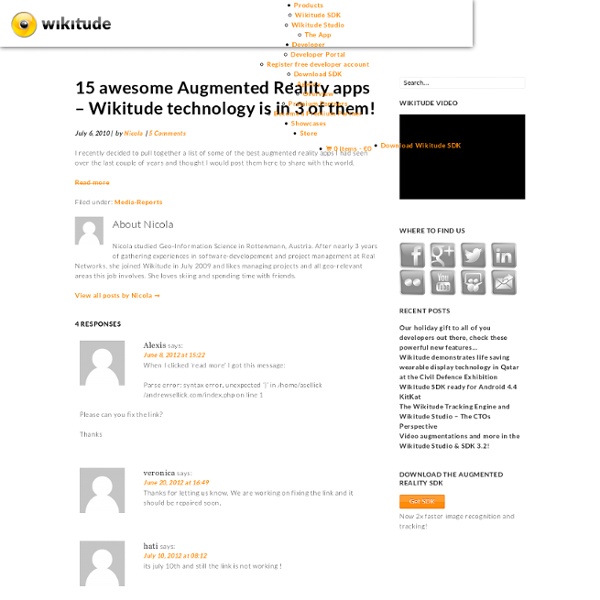 Creation Tools: Series Wrap-Up By Chris Cameron on December 20th 2010 Over the last several weeks here on the Layar blog, we profiled three services for generating Layar content, which we call Layar Creation Tools (or LCTs). While other services exist or are in development, we chose to focus on these three – Skaloop , Hoppala Augmentation and BuildAR – because of their availability and accessibility to users of all skill levels. Each LCT is unique and has its benefits to different users, so we decided to make a matrix that shows which features are available on each LCT. As you can see, Hoppala includes most of the features listed, such as layer actions, 3D objects and custom interaction widgets. Skaloop and BuildAR are simpler LCTs than Hoppala in terms of functionality, but their interface and design is a bit more digestible for more casual users. If you are interested at all in creating Augmented Reality content on Layar, have a look at the matrix below and see which LCT might be right for you.

|Home| .:: Inglobe Technologies ::. Mapy Google dla komórek Discover new experiences across the world or around the corner Explore your worldWith the redesigned Explore tab, find places to eat and things to do around you or when you travel See places you match withThe Your Match score shows you how well a place matches your tastes and preferences Just for youSee recommendations for new and trending places based on your interests Create listsEasily create lists of places you want to go, and add notes to the places you’ve saved. You can keep these lists private, share them with close friends, or share them publicly. You can also browse through lists created by publishers, Local Guides or Google Make your plans happen by connecting with the places you’re interested in Follow your favoritesStay on top of offers, updates and more when you follow your favorite businesses Book aheadMake a reservation, book an appointment, or get tickets with just a few taps Learn more Control your data with confidence Mountain View, California Read more Sign up

Hoppala | Mobile Augmented Reality LinceoVR — Seac02 s.r.l. Best Android Email App - Free Download From Android Market If you're looking for the best free Android email app, we've done all the hard work for you! Checkout this list of the top 5 choices, and see who we judged the best! Find The Best Android Email Apps for Free!Truly one of the greatest things about smartphones is the ability to send and receive emails. If you have a regular Wi-Fi connection or have a generous data-plan, you can connect to the internet and check emails as often as you like; thanks to a useful software or hardware keyboard you can tap out messages to friends and colleagues.All of this means of course that a good quality email client is required on your mobile device in order to get the most out of this form of emailing. The best place to find these is on the market – and the best price is of course free!

Find Great Local Deals with Anca 3D’s Groupon Layer By Adriane on March 10th 2011 While coupon-clipping is a practice generally reserved for those who still pay for a print newspaper subscription, collective-buying companies like Groupon and Living Social are growing rapidly. Both companies also now have mobile apps that allow you to view and purchase daily deals on-the-go and redeem them digitally (saving time and trees, yay!). Layar developer and Anca 3D co-founder Juan de la Torre (a recent Canadian transplant from Colombia) used Groupon’s open API to create a layer that displays nearby Groupon deals. Currently, the Groupon API is only available in the US and Canada, so the layer is only available in those countries as well. Hopefully Groupon will get on board and add de la Torre’s AR content to its existing app! Anca 3D is a Columbia and Canada-based Augmented Reality development company co-founded by Juan de la Torre and Andres Cardoso.

33 Awesome Augmented Reality Apps & Games for Android Augmented Reality (AR) is going to be the future of most apps, all it takes is a decent processor, a camera, a compass and a GPS — all of which are becoming increasingly common on smart phones. This futuristic AR world for android is is slowly growing. Though, the true experience of Augmented Reality Technology is yet to be seen, some apps and games which are available for Android can give you a glimpse of it. (I’ve added QR Codes as well so its easy for you to download them. Get updates on new Android apps delivered to your email by subscribing to our RSS feed – Subscribe. 1. World Browser is an augmented reality browser based on location-based Wikipedia and Qype content. Watch this video to get an idea how it works. 2. One of the first and best of it’s kind in the world, Layar App is a beautiful, fun augmented reality Browser app that displays real time digital information on top of the real world as seen through the camera of your mobile phone based on your location. 3. 4. 5. 6. 7. 8.

Business Ecosystems » augmented reality The increasing popularity of Augmented Reality apps for smart phone (which means, iPhone and Android: apps for Windows Mobile are still to come) is under the radar of our blog since a (quite) long time and, indeed, we have found that most of the apps available for download are focused on a small number of application fields. According to a classification developed by Gary Hayes, augmented reality applications can be catalogued in 16 different business (we’d rather write service) models. The chart below is useful to understand which apps are more popular and profitable (or, whith a higher commercial value). We believe that our of these 16 service models, we can pick up four or five main models which could be applied or involved in an AR service concept which a strong relationship with telecommunication and social network capabilities: Location layerEnhanced classifiedPersonalized shopping Recognition and TargetingBlended Brand Share Tags: augmented reality