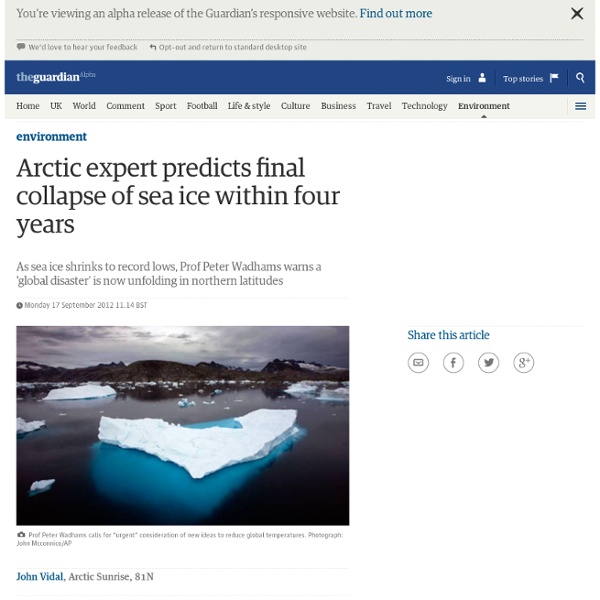 Prof Peter Wadhams calls for “urgent” consideration of new ideas to reduce global temperatures. Photograph: John Mcconnico/AP One of the world's leading ice experts has predicted the final collapse of Arctic sea ice in summer months within four years. In what he calls a "global disaster" now unfolding in northern latitudes as the sea area that freezes and melts each year shrinks to its lowest extent ever recorded, Prof Peter Wadhams of Cambridge University calls for "urgent" consideration of new ideas to reduce global temperatures. In an email to the Guardian he says: "Climate change is no longer something we can aim to do something about in a few decades' time, and that we must not only urgently reduce CO2 emissions but must urgently examine other ways of slowing global warming, such as the various geoengineering ideas that have been put forward." These include reflecting the sun's rays back into space, making clouds whiter and seeding the ocean with minerals to absorb more CO2.

6 WWI Fighter Pilots Whose Balls Deserve Their Own Monument We usually think of fighter pilots as kick ass cowboys of the sky, living out our video game fantasies and handing out bitchin' nicknames all day long. But today's fighter pilots have nothing on the first of their kind -- the guys who appeared in the first world war when airplanes themselves were new and experimental. That is, instead of being surrounded by huge, sturdy metal planes with state-of-the-art avionics, these guys sat in rickety frames of plywood wrapped in flammable fabric, next to large tanks of highly combustible fuel. Then they took to the skies and tried to kill each other. So let's take a moment to salute... Sir David Grahame Donald Right off the bat, you're going to call bullshit on this story. Sir Grahame Donald started out like a lot of RAF pilots: young, brave and parachute-less. "It's not that the planes are worth more than your life, but...well, they are." ... Which is not a situation they teach you how to handle in pilot school. Artist's representation.

Scratch Markup Language (.sml) SML (Scratch Markup Language) is a new file format for recording and replaying turntablism. We’ve developed open-source tools for accurately capturing the record and crossfader movements of a scratch DJ, allowing us to analyze, transcribe, and recreate scratch performances. We want to do for turntablism what Graffiti Markup Language has done for tagging — especially teaching giant robot arms how to scratch. At Art Hack Day we collaborated with other artists and programmers to develop the first prototypes of ScratchML. Scratch data was saved to disk as .sml and broadcast as OSC, which allowed other Art Hack Day participants to build visualizations based on what the DJ was scratching during the exhibition. Our goal is to make capturing, replaying, and sharing a scratch performance accurate and easy. Throughout the week here on FAT we’ll be publishing ScratchML projects created during Art Hack Day, data specs, source code, hardware modification details and more. Want to get involved?

Badass How to make a laptop cooling stand Laptops might have been designed with portability and long battery life in mind, but they weren't designed for comfort. Use a laptop on your coffee table for more than five minutes and you're transformed into a warped and twisted, hunchbacked visage of a human being. What you need is something that raises and angles your fine laptop into a more human-friendly angle. And while we do thank a clever clogs for pointing out a book shoved under the back of the laptop would do just that, it's hardly what we'd call an elegant solution. As it happens, it's easy enough to grab an acrylic sheet and bend the two ends to produce an effective custom laptop stand. An A3-sized acrylic sheet should be fine for most laptops. What you will need A3 acrylic sheetCase fanUSB cableProtective glovesHot-air paint stripperSoldering kitClampsWorkbenchWire wool 1. 2. 3. 4. 5. 6. 7. 8. 9. 10. Like this? Sign up for the free weekly TechRadar newsletterGet tech news delivered straight to your inbox.

Dictionary, Encyclopedia and Thesaurus - WordIQ Dictionary Ergonomic Input Devices and Accessories for Canadians - Online Resource and Store Strength of Canadian Dollar Translates into Big Savings A good portion of our pricing on ErgoCanada.com is based on the list price in US dollars direct from the manufacturer. With the recent increase in the strength of our dollar against the US dollar, many of the products on the site have been reduced in price, in some cases by as much as $25! Take this opportunity to stock up on products for your home or office workstation, or buy that product that was slightly out of reach of your budget. Flextend Therapeutic Gloves FLEXTEND is used for the prevention and rehabilitation of carpal tunnel syndrome and repetitive strain injuries of the upper extremities. FLEXTEND helps provide relief from symptoms associated with Carpal Tunnel Syndrome by exercising the extensor muscles in your forearm. To insure you order the correct size, measure from the base of the hand (first wrist crease closest to palm) to the tip of the middle finger. Mouse Manager LP Now Comes with Fixed Tenting Mechanism