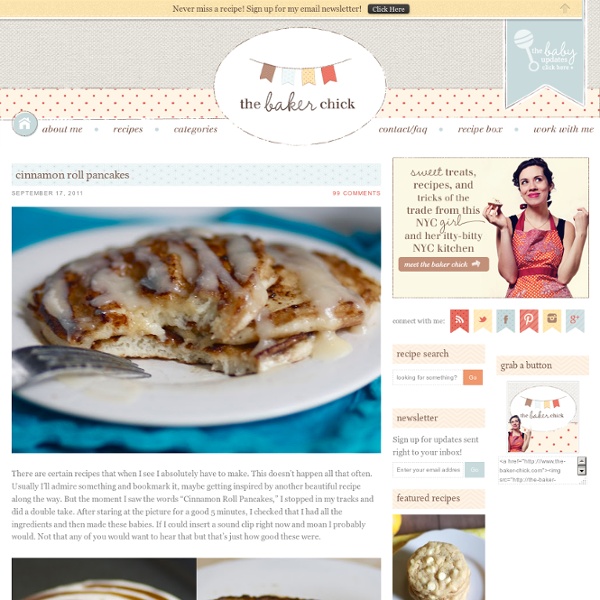 There are certain recipes that when I see I absolutely have to make. This doesn’t happen all that often. Usually I’ll admire something and bookmark it, maybe getting inspired by another beautiful recipe along the way. But the moment I saw the words “Cinnamon Roll Pancakes,” I stopped in my tracks and did a double take. After staring at the picture for a good 5 minutes, I checked that I had all the ingredients and then made these babies. If I could insert a sound clip right now and moan I probably would. You basically start with a classic pancake, (this recipe below or your own,) and swirl in a cinnamon, brown sugar, butter mixture. I highly recommend you makes these happen in your life very soon. Ingredients Instructions Prepare pancake batter: In a medium bowl, whisk together flour, baking powder and salt. Notes The filling portion listed above is WAY too much for 4 medium pancakes.

Recipes from Kevin &038; Amanda - StumbleUpon This post is in partnership with French’s Sweet Yellow Mustard and Spicy Yellow Mustard. I received compensation to write this post through the Sweet and Spicy Influencer Program. All content, photos, and opinions are my own. Green Tea Bundt Cake By Joanne Choi, Week of Menus This cake is a favorite among my women’s church group. It’s not too sweet, has a really lovely green tea flavor and has a striking color and look to it. In addition, it’s very easy to throw together quickly (I made two bundt cakes on the same day in the same pan just so you know how much easier a bundt is) and the women love it. I know, because there isn’t any left. Soft Ginger Cookies {filled with cream cheese frosting} - StumbleUpon I have to say ginger cookies are were not one of my favorite cookies in the past until… my friend Maria introduced me to her delicious recipe. These are flavorful, soft and chewy cookies rolled in large crystal sugar and then to kick them up a notch, cream cheese frosting smothered in between them. These are the perfect cookies for gift giving during the holidays because of the warm spices. The recipe for these cookies is versatile, whole wheat flour can be substituted for half the flour still giving a wonderful texture and flavor to them.

Cinnamon Roll Sugar Cookies - StumbleUpon These are divine. Truly. They taste just like your favorite breakfast treat but in fabulous cookie form. I wish I could take credit for the idea, but I stumbled on something like it and thought I would give it a whirl. Mint Chocolate Chip Cake - StumbleUpon Chocolate cake and I have had a very interesting romance. I started off with quite an intense dislike of chocolate cake. I KNOW. But try not to judge me too harshly, I had many bad experiences with store-bought dry, dense mudcakes covered in grainy baking chocolate icing.

Irish Car Bomb Cupcakes Recipe As I mentioned on Friday, I have been doing some experimentation with the beer and chocolate combination. The Guinness-chocolate ice cream that I made totally kicked butt, so I couldn’t wait to see how I liked beer and chocolate in my cake. The answer? I like it, a whole heck of a lot. This was my first time doing Guinness-chocolate cakes, and I was totally optimistic that I would love it, and I was definitely right. These cupcakes are fashioned after the popular drink that consists of a shot of Baileys Irish Cream and Irish whiskey dropped into a pint of Guinness. Just cut calories & protein/carb/fat ratio doesn&t matter: study -... There’s no shortage of diet plans promising to melt away the pounds by calling for strict proportions of protein, carbohydrate and fat. But, according to a new study, it doesn’t matter where the calories come from. What matters most for shedding body fat is simply eating fewer calories – and sticking to your plan, be it high protein, low carb or low fat. Some, but not all, studies have demonstrated that high protein, low carbohydrate diets work better than others at losing fat and preserving muscle mass over the short term.