Timeline of the far future 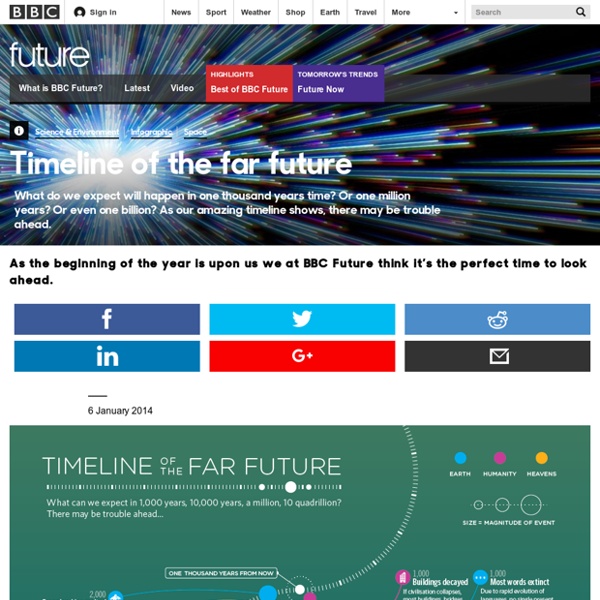 Doge pronunciation: How do you pronounce the name of the shibe doge meme. The meme known as doge—in which photos of dogs, usually Shiba Inus, are labeled with internal monologues like “wow,” “such [adjective],” and “very [noun]”—has been taking over the Web in recent weeks. Websites and comment sections are full of phrases like “Wow, so crack” (in reference to Toronto Mayor Rob Ford) and “Such fail” (in relation to the healthcare.gov rollout). But how do you pronounce doge? No one seems to agree. If you ask Google, for example, all you’ll get is the pronunciation of the word that means “chief magistrate of Venice.”

What Did the Continents Look Like Millions of Years Ago? - Geoff Manaugh & Nicola Twilley The paleo-tectonic maps of retired geologist Ronald Blakey are mesmerizing and impossible to forget once you've seen them. Catalogued on his website Colorado Plateau Geosystems, these maps show the world adrift, its landscapes breaking apart and reconnecting again in entirely new forms, where continents are as temporary as the island chains that regularly smash together to create them, on a timescale where even oceans that exist for tens of millions of years can disappear leaving only the subtlest of geological traces. With a particular emphasis on North America and the U.S. southwest—where Blakey still lives, in Flagstaff, Arizona—these visually engaging reconstructions of the Earth's distant past show how dynamic a planet we live on, and imply yet more, unrecognizable changes ahead. These images come from Ron Blakey's maps of the paleotectonic evolution of North America. But I was late getting into the computer. Basically, during my graduate work I never used a computer for anything.

Erowid Cannabis Vault : Article - "The Truth About Marijuana" The debate over the legalization of Cannabis Sativa, more commonly known as marijuana, has been one of the most heated controversies ever to occur in the United States. Its use as a medicine has existed for thousands of years in many countries world wide and "can be documented as far back as 2700 BC in ancient Chinese writings." When someone says bhanga, ganja, kinnub, cannabis, bung, chu ts-ao, asa, dope, grass, rasta, or weed, they are talking about the same subject: marijuana. Marijuana should be legalized because the government could earn money from taxes on its sale, its value to the medical world outweighs its abuse potential, and because of its importance to the paper and clothing industries. This action should be taken despite efforts made by groups which say marijuana is a harmful drug which will increase crime rates and lead users to other more dangerous substances.

Shibe Doge [There is a] general principle of internet language these days that the more overwhelmed with emotions you are, the less sensical your sentence structure gets, which I’ve described elsewhere as “stylized verbal incoherence mirroring emotional incoherence” and which leads us to expressions like “feels,” “I can’t even/I’ve lost the ability to can,” and “because reasons.” Contrast this with first-generation internet language, demonstrated by LOLcat or 1337speak, and in general characterized by abbreviations containing numbers and single letters, often in caps (C U L8R), smilies containing noses, and words containing deliberate misspellings. We’ve now moved on: broadly speaking, second-generation internet language plays with grammar instead of spelling. If you’re a doomsayer, the innovative syntax is one more thing to throw up your hands about, but compared to a decade or two ago, the spelling has gotten shockingly conventional.

s 2014 Hype Cycle for Emerging Technologies Maps the Journey to Digital Business STAMFORD, Conn., August 11, 2014 View All Press Releases 2014 Hype Cycle Special Report Evaluates the Maturity of More Than 2,000 Technologies 2014 Marks 20th Anniversary of the Gartner Hype Cycle Deep oceans warming at an alarming rate Two newly published studies are helping scientists trace millions of years of Antarctica's climate history, including an age when parts of the continent were as warm as the California coast is today. One of the studies focuses on an ice core taken from Antarctica's Taylor Glacier, and uses readings of radioactive krypton to confirm that the sample goes back 120,000 years. The researchers behind that study, appearing in the Proceedings of the National Academy of Sciences, say the same technique could provide more accurate dates for ice samples going back as far as 1.5 million years. "That is very exciting, because a lot of interesting things happened with the earth's climate prior to 800,000 years ago that we currently cannot study in the ice-core record," Christo Buizert, a researcher at Oregon State University who is the study's lead author, said in a news release. Xavier Fain / NSF Now researchers plan to go after Antarctica's oldest ice.

Scientists Discover Massive “Ocean” Near Earth’s Core Image via NASA Earth is a rather watery place. At least, when compared to some of the other rocky planets, our world seems to be drowning in water. Infants 'unable to use toy building blocks' due to iPad addiction Experts have warned that the growth is having a serious effect on children’s social and physical development. Last year, a doctor claimed that rising numbers of young people – including one aged just four – required therapy for compulsive behaviour after being exposed to the internet and digital devices from birth. Addressing the ATL annual conference in Manchester, Colin Kinney, a teacher from Northern Ireland, said colleagues “talk of pupils who come into their classrooms after spending most of the previous night playing computer games and whose attention span is so limited that they may as well not be there”. He added: “I have spoken to a number of nursery teachers who have concerns over the increasing numbers of young pupils who can swipe a screen but have little or no manipulative skills to play with building blocks or the like, or the pupils who cannot socialise with other pupils but whose parents talk proudly of their ability to use a tablet or smartphone.”

Solar Storm Dumps Gigawatts into Earth's Upper Atmosphere Solar Storm Dumps Gigawatts into Earth's Upper Atmosphere March 22, 2012: A recent flurry of eruptions on the sun did more than spark pretty auroras around the poles. NASA-funded researchers say the solar storms of March 8th through 10th dumped enough energy in Earth’s upper atmosphere to power every residence in New York City for two years. “This was the biggest dose of heat we’ve received from a solar storm since 2005,” says Martin Mlynczak of NASA Langley Research Center. Teachers Claim Overexposure to Tablets Stunt Motor Skill Development and Memory Infants raised on iPads have trouble using building blocks, teachers say Maybe parents should rethink giving their children a tablet this holiday shopping season, especially if their lifestyle makes it difficult to limit use to such devices. Members of the Association of Teachers and Lecturers are speaking out against overexposure to tablets, warning that a growing number of infants aren't developing the proper motor skills to play with building blocks due to their "addiction" to tablet PCs and smartphones. According to a report in the U.K.'

Hidden Portals in Earth's Magnetic Field Hidden Portals in Earth's Magnetic Field June 29, 2012: A favorite theme of science fiction is "the portal"--an extraordinary opening in space or time that connects travelers to distant realms. A good portal is a shortcut, a guide, a door into the unknown. If only they actually existed.... PC Drivers for Xbox One Controller Available PC gamers will not have to wait for a Windows Update Microsoft is set to release PC drivers so that users will be able to play their games with the Xbox One controller in an upcoming Windows update. But for the dedicated PC gamer, Xbox Live’s Major Nelson is offering early access to the drivers for download on his blog. Xbox Live director of programming Larry “Major Nelson” Hryb made the announcement saying, “We know our fans have wanted PC compatibility, and we know they wanted to be able to use the Xbox One controller with the same games and applications they have been playing with using the Xbox 360 controller.