The Economic Forces at Work Behind the Karen Ceasefire 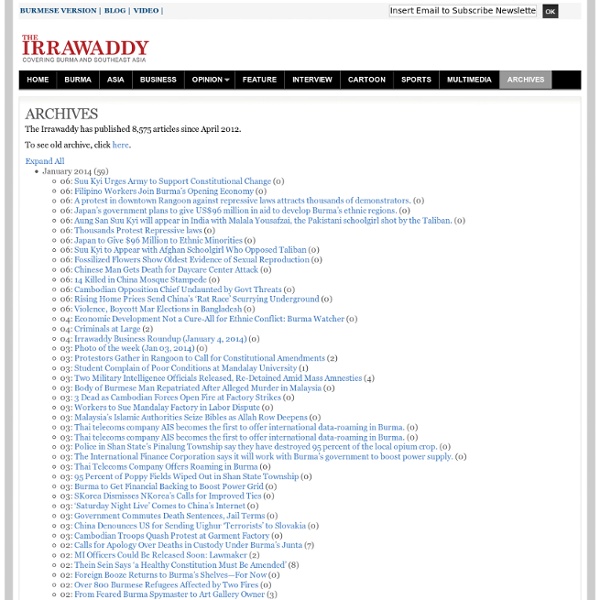 ITD insists it can handle Dawei, has the experience Preserving Cabrini-Green's images In the sharp sun of an April afternoon, Nate Lanthrum walks through the remains of Cabrini-Green giving away what he has taken. He looks out of place, a white guy carrying a $1,500 Nikon D700 camera, but the residents are used to him by now and greet... Blackhawks thrilled to have Brent Seabrook back Starting with Game 6 Sunday, Brent Seabrook's timeout will be over and the defenseman will be back on the ice — so long as he promises to play nice. NFL draft preview: Defensive ends As the NFL draft nears — it takes place May 8-10 — we're taking an 11-day, position-by-position look at what's out there and what the Bears need. In May 1974, Tribune delivered 2 Watergate bombshells Forty years ago this Thursday, Tribune readers found an extraordinary special section in their morning paper — a 44-page transcript of taped Oval Office conversations, the long-sought smoking gun of Watergate, perhaps the greatest political crisis... Northwestern women win at Wrigley

Former Burmese Dissident Monk Gambira Disrobes - Southeast Asia Real Time By Shibani Mahtani and Celine Fernandez Agence France-Presse/Getty Images Myanmar dissident Buddhist monk Gambira attends a ceremony at a monastery in Yangon on Feb 19. After years of imprisonment and detention, Gambira– once a prominent dissident Buddhist monk in Myanmar – has disrobed and is now a civilian. Gambira, who like most monks goes by one name, was instrumental in leading popular anti-government protests in 2007 known as the Saffron Revolution, which Myanmar’s then-military regime stifled with a brutal crackdown. Although Gambira was released in January, he was detained for questioning, according to reports from the Associated Press, and released shortly after. Those close to the former monk said he has continued to voice his antipathy for Myanmar’s civilian and reformist government since being released – leading to a string of difficulties that ultimately prevented him from continuing his life in the monastery. “It is very sad.