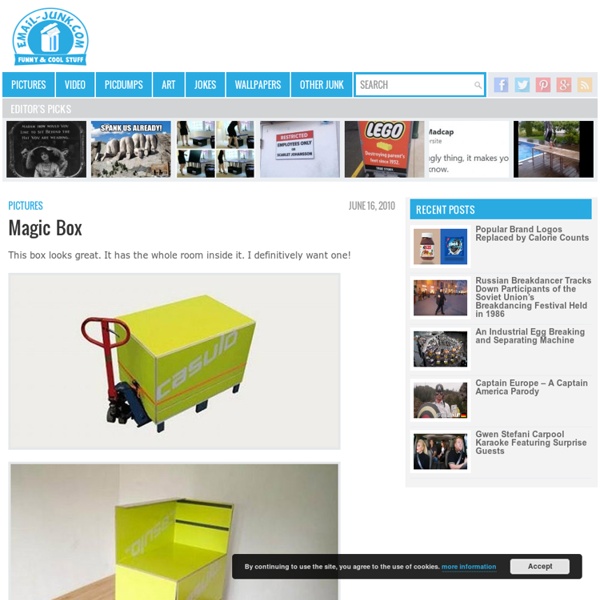 50 Strange Buildings of the World This is the original list of 50 strange buildings which has been and is being copied (stolen) by many bloggers. If you wish to post it on your blog or website, feel free to use up to 20 buildings from this list and give a proper link to our website ( as the source article. Ok, now enjoy this weird, odd, bizarre and incredible looking arcitechture! After reading it, don’t forget to check Part II and Part III. 1. Construction of the building started in in January 2003 and in December 2003 it was finished. Image via: brocha 2. The Hundertwasser house “Waldspirale” (”Forest Spiral”) was built in Darmstadt between 1998 and 2000. The structure with 105 apartments wraps around a landscaped courtyard with a running stream. Image via: Kikos Dad 3. Image via: manuelfloresv 4. Image via: Mélisande* 5. The Longaberger Basket Company building in Newark, Ohio might just be a strangest office building in the world. Image via: addicted Eyes 6. Image via: jonathan_moreau 7.

The Sifter's Top 10 Homes of 2010 If you’re a regular reader of the Sifter you’re familiar with my real estate fascination. I love posting all types of homes. From the unique and interesting to the grand and opulent. Below you will find a collection of the Sifter’s Top 10 Homes from 2010. Click any picture or link to be taken to the original post, enjoy! The Biggest and Most Expensive Home Posted in 2010 This staggering 48,00 square foot mega-mansion in the Cayman Islands was listed at a jaw-dropping $59 million USD! The Best Use of Limited Space [500 sq ft] Architects Darrick Borowski and Danny Orenstein show us that it’s possible to live quite comfortably in 500 square feet (46 sq m). The Most Exotic Home Posted in 2010 Located in gorgeous Phuket, Thailand, this stunning property boasts over 8,000 square feet of interior space and over 8,500 square feet of outdoor terrace space as well! The Craziest Penthouse Posted in 2010 The Coolest Retrofit Property of 2010 It’s a 1965 Boeing 727 converted into a hotel room.

10 Creative Advertising Ideas from Students « Gencay's Blog Elke Krause, Janine Mompour, Kristina Möckel Shawna Laken, Tony Kalathara Doritos bags are printed on pockets of sweatshirts. Jeongjyn Yi A Sony PSP is painted around an actual tennis court. Jeongjyn Yi Victor Holanda, Moises de Oliveira Andrew Seagrave Peter Delgado Help plant more. greenpeace.com Sungkwon Ha Jeseok Yi Like this: Like Loading... Related 100 Very Cool Facts About The Human Body The Brain The human brain is the most complex and least understood part of the human anatomy. There may be a lot we don’t know, but here are a few interesting facts that we’ve got covered. Nerve impulses to and from the brain travel as fast as 170 miles per hour. Hair and Nails While they’re not a living part of your body, most people spend a good amount of time caring for their hair and nails. Facial hair grows faster than any other hair on the body. Internal Organs Though we may not give them much thought unless they’re bothering us, our internal organs are what allow us to go on eating, breathing and walking around. The largest internal organ is the small intestine. Bodily Functions We may not always like to talk about them, but everyone has to deal with bodily functions on a daily basis. Sneezes regularly exceed 100 mph. Sex and Reproduction As taboo as it may be in some places, sex is an important part of human life as a facet of relationships and the means to reproduce. Senses

The Luxury Dhigu Resort, Maldives | Luxury Furniture, Property, Travel & Interior Design The luxury Dhigu Resort, Maldives Anantara Dhigu Resort & Spa is encircled by mystic lagoons and unspoilt crystal shores, the resort is a heavenly sanctuary on a secluded paradise island, offering barefoot elegance in one of the world’s most celebrated tropical havens. Here the sparkling turquoise waters of the Indian Ocean offer an endless horizon of aquatic allure and the evocative location is matched by a tranquil island design style. Anantara Dhigu is a luxurious five-star resort hidden on tropical terrain on Dhigufinolhu Island in the Maldives’ South Male Atoll, a mere 35 minute speedboat journey from the island nation’s international airport, or a scenic five minutes by private chartered seaplane. Male-based architect Mohamed Shafeeq from Group X Design Associates and Thailand-based interior design company, Abacus, headed by John Lightbody, have styled the resort’s distinctive environment as a creative complement to the natural beauty of the island. Anantara Dhigu, P.O.

Bike Hanger: Vertically Rotating, Multi-Level Bike Parking By Manifesto Architecture Images: The vertically-hung, space-saving Bike Hanger by Manifesto Architecture It's a scenario familiar in many cities: ugly, unwieldy and badly-designed bike racks, with the worst of it being that there's never enough bike parking to go around (meaning messy clumps of bikes in public spaces, for example). And with space in urban areas usually at a premium, it makes sense to stack things vertically. The intriguing Bike Hanger from New York-based Manifesto Architecture does the vertical trick, but takes things a step further by hanging off the side of buildings in those underused, residual spaces between them. According to ArchDaily, Bike Hanger was designed and shortlisted for the 2010 Seoul Cycle Design Competition, which called for ideas to improve the city's bike-friendliness and infrastructure. The idea is to keep pedestrian flow of traffic free from bike interference, and public spaces free of unsightly globs of locked bikes that look like cycling disasters. Like this?

Quotes » Fact Fanatic I'd rather be hated for who I am than loved for who I am not. - Kurt Cobain Wise men talk because they have something to say. - Plato Sometimes we build walls around ourselves, not to keep people out, but to see who cares enough to break them down. - Unknown He who knows not and knows not he knows not, He is a fool - Shun him. He who knows not and knows he knows not, He is simple - Teach him. He who knows and knows not he knows, he is asleep - Awaken him. He who knows and knows that he knows, He is wise - Follow him. - Chinese proverb Facts do not cease to exist because they are ignored. -Aldous Huxley I am free, no matter what rules surround me. -Heinlein If it's stupid, and it works, it isn't stupid. -Murphy's laws of combat. We, the willing, led by the unknowing, are doing the impossible for the ungrateful. -Anonymous Draw a line. The only people you need in your life are the ones that proved they needed you in theirs. - Anonymous -Ralph Waldo Emerson -E.J.Phelps -Alexander Pope -Unknown -Sun Tzu -W. -H.

Dracula Castle Transylvania | Travel Guides, Luxury Travel and Travel Info Bran Castle situated near Bran and in the immediate vicinity of Bra?ov, is a national monument and landmark in Romania. The fortress is situated on the border between Transylvania and Wallachia, on DN73. Commonly known as “Dracula Castle” (although it is one among several locations linked to the Dracula legend, including Poienari Castle and Hunyad Castle), it is marketed as the home of the titular character in Bram Stoker’s Dracula. There is, however, no evidence that Stoker knew anything about this castle. The castle is now a museum open to tourists, displaying art and furniture collected by Queen Marie. In 1212, Teutonic Knights built the wooden castle of Dietrichstein as a fortified position in the Burzenland at the entrance to a mountain valley through which traders had travelled for more than a millennium, although it was destroyed in 1242 by the Mongols. From 1920 the castle became a royal residence within the Kingdom of Romania. Like This Story? StumbleUpon Google +