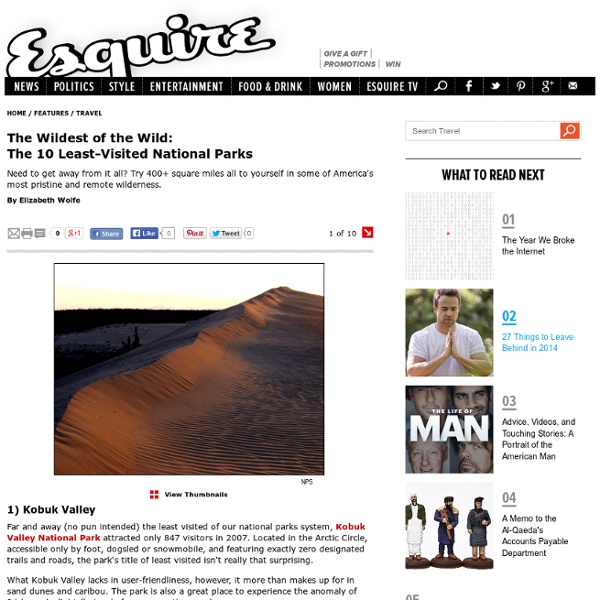 Looking for sunken pirate ships and lost treasure? Civil War history buff? Really into masonry? If any of these apply to you, then Dry Tortugas National Park is the park for you. Seventy miles west of Key West are the Dry Tortugas islands, so-called because they lack surface fresh water ("dry") and Ponce de Leon caught a lot of sea turtles ("tortugas") here in the 1500s. The centerpiece of the park is Fort Jefferson, a behemoth brick fortress originally intended to protect the U.S. from Gulf Coast invaders (namely pirates), but also used as a Union stronghold during the Civil War. Dry Tortugas is also a great place to watch migratory birds in the spring. Related:  lugares para visitar • i wanna see

9 Abandoned Islands Where Time Has Stopped Some islands were used for military purposes, for the construction of individual buildings or for permanent settlements in which people lived for centuries. However, loss of strategic position, natural disasters, nuclear tests or simply wish to live in civilization, led to the abandonment of these islands. This is a list of abandoned islands, where time has stopped, where homes, buildings and streets standing untouched for decades. 1. Hirta, Scotland, UK Hirta is the largest island in the St Kilda archipelago, on the western edge of Scotland. 2. Holland Island is a marshy, rapidly-eroding island in the Chesapeake Bay, in Dorchester County, Maryland, west of Salisbury. 3. North Brother Island is an island in the East River situated between the Bronx and Riker's Island. 4. Bikini Atoll is an atoll, listed as a World Heritage Site, in the Micronesian Islands of the Pacific Ocean, part of Republic of the Marshall Islands. 5. 6. 7. 8. 9. Pollepel Island is an island in the Hudson River.

Japanese dogu statues These Japanese Dogu statues were made by the Jorom people and dated to about 5000 BC. They can be found in the Japan Archaeological Collection of Tohoku University, Sendai. These statues are one of those anomalies that, if you really want to look with an open mind, will bring you volumes to read written by people who are convinced these are beings in pressurized suits and even those who believe they have "translated" the designs on them; they can be correlated to actual mechanical and technical equipment as we know it today. Tightly cuffed armbands, mouth filters, pressurized suits, eye wear to see in our atmosphere, shoulder pads, gloves, equipment? For basic starters, the figures are wearing goggles which were unknown then. The legends of the Jorom speaks about aerial battles, flying "dragons" and a host of modern things going on in their prehistoric world.

Most Beautiful Villages Around The World photo Popeye Village, is a group of rustic and ramshackle wooden buildings located at Anchor Bay in the north-west corner of the Mediterranean island of Malta. Photo by: Mosin Village on the bank of the Niger river, Mali. Photo by: Yann Arthus-Bertrand Hidden mountain village in Southern China. Mist over countryside in Southwest England. Hobbiton village – “Lord of the Rings” movie location in New Zealand. Riomaggiore is a village and comune in the province of La Spezia, situated in a small valley in the Liguria region of Italy. Mountain Village, Iran. Beautiful African sea side village. Hallstatt, Upper Austria, is a village in the Salzkammergut, a region in Austria with 946 inhabitants. Gásadalur village, Faroe Islands. Village located in Himalayas, Tibet. Fort Bourtange is a star fort located in the village of Bourtange, Groningen, Netherlands.

10 Inspiring Bookshops around the World I f you have built castles in the air, your work need not be lost; that is where they should be. Now put the foundations under them. – Henry David Thoreau Just some shops that sell books that I think are worth crossing oceans for… 1. A little sign outside says, “Welcome to the Most Beautiful Bookshop in the World”. Alta Acqua is not a place you’ll find in your average guidebook and most visitors to the floating city will come and go without ever finding this treasure trove. Alta Acqua, Sestiere Castello, 5176/B 30122 Venice, Italy, Facebook Page here . 2. Founded in 1964, Bart’s Books is a beautiful outdoor bookstore where you can sip lemonade in the courtyard surrounded by a maze of bookshelves, play a game of chess in the shade or read a short story under the apple tree. Bart’s Books, 302 W. 3. Without a doubt, one of the most beautiful islands in the Mediterranean, but not exactly the place you’d think to go looking for a charming English bookshop. 4. 5. 6. As for the address? Pssst!

10 Unusual Beaches You Have Never Heard Of | Flying the Nest 1. Black Sand Beach, Hawaii The name speaks for itself. (source) 2. Again, the name gives it away. (source) 3. And you thought The Maldives couldn’t get any prettier! (source) 4. This secret paradise was created when the Mexican government in the early 1900’s made a bombsite out of the area, blasting a huge hole on the canopy of the grotto. (source) 5. Not only is Whitehaven Beach a photographers dream, it has been awarded the most eco-friendly beach in the world! (source) 6. Make sure you head down with a shovel because at this beach you can dig your very own DIY spa. (source) 7. We have been lucky enough to visit the mind blowing Maho Beach, here you can literally jump up and touch a plane as it lands meters away from you at Princess Juliana International Airport. (source) 8. Every morning, the sea at Chandipur Beach disappears, receding up to 5 kilometers from the shore. (source) 9. (source) 10. (source) Do you want to go to any of these beaches?

This Is The Most Beautiful Beach In Greece, Which Means It's The Prettiest Beach In The World We know, we know. You're thinking to yourself, "Come on, guys, another pretty beach?" And we totally understand but look. at. this: Navagio has been called the prettiest beach in all of Greece, which, if we can all agree is one of the prettiest places in all the world, then this beach is the prettiest beach in the whole wide world. Logic works for us. And so do these pics. Oh, did we mention that to add to the beauty there's a creepy factor, too? There's a really beautiful walk and platform perched high above the beach with views of the Ionian island of Zakynthos. And here's the view from the beach.

Five Off the Beaten Path Places to Visit in Mexico Home » Getaways + Events, travel advice Mexico is traveled to by people from all parts of the world, yet most tourists miss many of its best spots. It is a large and diverse country with much to offer. Guanajuato – Halfway between Mexico City and Guadalajara lies one of Mexico’s greatest cultural treasures. Puerto Escondido – Most surfers have heard of this special place in Oaxaca. Tiburon Island – There is a place where the Gulf of California and the Sonoran Desert meet. Bahias de Huatulco – Often just called “Huatulco”, this gem of a place lays on the south facing coast of western Mexico. Copper Canyon – The whole world knows about the American treasure of the Grand Canyon. IMAGES VIA: K.

Top 10 European Cities At Spring | Fodor's With spring on the horizon, the romance of Europe seems more appealing than almost any other time of year. Rich in heritage, architecture, arts, music, and food, the Continent's cities welcome visitors with pretty flowers lining elegant boulevards, scintillating scenic coastlines, fine wines, and an expansive roster of museums and shopping. Spring in Europe is guaranteed to dazzle and delight your senses, whether you're looking to take off to an exclusive enclave, the newest hot spot, or a trendy metropolis for shopping and time on the beach. Amsterdam, Netherlands Vitaly Titov & Maria Sidelnikova / Shutterstock The Netherlands takes pride in its tulips, and the buds are big business. Peter Guttman / Fodor's Travel The attractive Swiss Riviera embodies splendor in spring, when temperatures thaw and flowers blossom along Lake Geneva’s lakeside promenade. Anisha Shah is a luxury and emerging destinations travel journalist.

US road trip: the call of the South It is easy to spend a day walking around the French Quarter and then take a trolley car to the Garden District. We dined at the newish Restaurant R’evolution at the Royal Sonesta hotel, a mixture of Cajun and Creole food from the Louisiana chef John Folse, who returned to his native New Orleans after Hurricane Katrina, to provide food for the desperate residents. I was dying to try a Sazerac, a rye-based cocktail made in a glass rinsed out with absinthe (we had been watching the HBO TV series Treme in which the chef Janette throws one at the real-life food critic Alan Richman), and we lingered in the bar watching the hotel’s resident band, the Original Tuxedo Jazz Band, who have the longest history of continuous performance in New Orleans – over 100 years. It was a perfect New Orleans vignette. Significantly there are no standard guide books to Alabama and Mississippi – no Rough Guides or Lonely Planets. BB King’s Blues Club in Beale St, Memphis A grocery store in northern Alabama