Flamethrower Versus Fire Extinguisher at 1000 Frames per Second 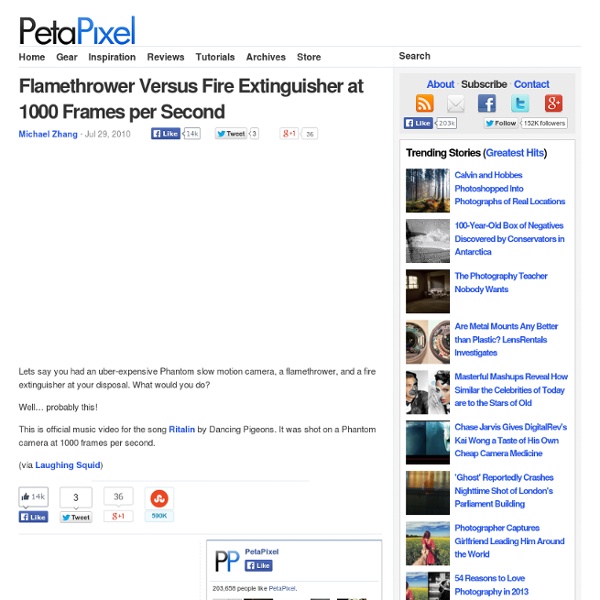 The Most Interesting Youtube Videos - Buzz Inn The Voca People The Voca People is an international vocal theater performance combining vocal sounds and an acapella singing with the art of beat-box. (visit WWW.VOCA-PEOPLE.COM) Artistic Director: Lior Kalfo Music. The Longest Way 1.0 – one year walk/beard grow time lapse From November 9th 2007 till November 13th 2008 this guy was on 4646km long walk through China. Sound of Music | Central Station Antwerp (Belgium) More than 200 dancers were performing their version of “Do Re Mi”, in the Central Station of Antwerp. with just 2 rehearsals they created this amazing stunt! Inspired Bicycles – Danny MacAskill April 2009 Filmed over the period of a few months in and around Edinburgh by Dave Sowerby, this video of Inspired Bicycles team rider Danny MacAskill features probably the best collection of street/street trials riding ever seen. The Brighton Port Authority – Toe Jam This video is well known to most of you. Amazing Bird That Can Imitate Any Sound Perpetuum Jazzile Kiwi! Einstein le perroquet

Warnings from Former Presidents About Who Really Runs the Show digg Verified Warnings From Former U.S. Presidents About the “Invisible Government” Running the U.S. With “No Allegiance To the People” By Ross Pittman | ConsciousLifeNews.com “Those who do not learn from history are doomed to repeat it.”- George Santayana Past presidents of the United States and other high profile political leaders have repeatedly issued warnings over the last 214 years that the U.S. government is under the control of an “invisible government owing no allegiance and acknowledging no responsibility to the people.” According to six of our former presidents, one vice-president, and a myriad of other high profile political leaders, an invisible government that is “incredibly evil in intent” has been in control of the U.S. government “ever since the days of Andrew Jackson” (since at least 1836). The sources for the above quotes (and more) are listed below. Warnings About the Invisible Government Running the U.S. “A great industrial nation is controlled by its system of credit.

Top photographs got massive visitors and impressions | Pokkisam blog After a long time i have found this interesting idea for readers and lovers of pokkisam blog. In this post I have compiled some best and brilliant photographs which receives more than 50,000 of visitors and impressions. Share this article with your friends and who loves these photos and comment about the photos. To get interesting updates Please subscribe to our RSS feed. Please comment about the photographs and share this article... About the author

Crazy Lion Man Categories October 23, 2010 3:06pm By Rowdy Joe Videos Crazy Lion Man Soon to be crazy lion poop! Another Parkour Flip Flop Spiderman Stunt Fail Comments Related Posts Recommended Posts Katamari Hack Lackadaisy Expressions Boy, I didn't know what I was getting myself into when I started this. I've had requests for some sort of expressions tutorial dating back a while now, so I figured, "Sure! I can explain expression drawing...and it'll be way better than all those tutorials out there that are nothing but charts of generic expressions. Um. Anyway, I found all I could really do was try to explain ways to teach yourself...and then add some pictures. Kseniya Simonova, Sand Animation, Ukraine's Got Talent 2009 Winner Video Description Kseniya Simonova is a 24 years old Ukrainian artist. She uses a giant light box, dramatic music, imagination and "sand painting" skills to interpret the occupation of Ukraine during WWII. She won Ukraine's Got Talent 2009, watched by over 13 million people. Source: Kseniya Simonova.com. Kseniya Simonova Kseniya Simonova (born 1985) is a sand animator from Ukraine. She started drawing with sand after her business collapsed due to the early 21st century credit crunch and had been drawing for less than a year when she entered Ukraine's Got Talent. Simonova won 1,000,000 Ukraninan Hryvnia (approx. Sand artist Kseniya Simonova, winner of Ukraine's Got Talent, becomes internet hit Sand artist, Kseniya Simonova, who moved audiences to tears as she won Ukraine’s Got Talent, has become an online sensation with more than two million hits. It is replaced by a woman’s face crying, but then a baby arrives and the woman smiles again.