Some schemes to boost brainpower are too clever by half 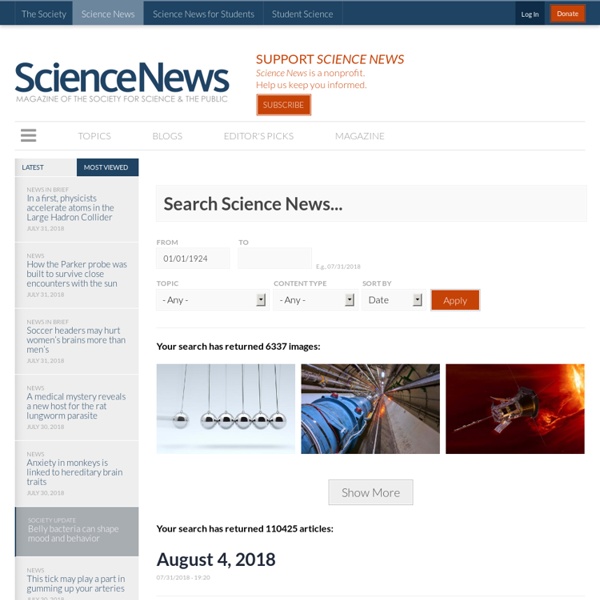 Artificial Wombs Are Coming, but the Controversy Is Already Here Zoltan Istvan is a futurist, philosopher, journalist, and author of the bestselling novel The Transhumanist Wager. He writes an occasional column for Motherboard ruminating on the future beyond natural human ability. Of all the transhumanist technologies coming in the near future, one stands out that both fascinates and perplexes people. It's called ectogenesis: raising a fetus outside the human body in an artificial womb.

Paleontology & Archaeology Unique chromosomes preserved in Swedish fossil Researchers from Lund University and the Swedish Museum of Natural History have made a unique discovery in a well-preserved fern that lived 180 million years ago. Both undestroyed cell nuclei... Counting calories in the fossil record The Daily Brain If I offered to sell you a liquid extract made from the velvety coating of deer antlers, claiming that it will catalyze muscle growth, slow aging, improve athletic performance and supercharge your libido – I’d expect you'd be a little skeptical. But what if I added that a huge percentage of professional athletes are using the stuff and paying top dollar, $100 or more an ounce, and swear up and down that just a few mouth sprays a day provides all benefits as advertised? Would you be willing to give it a try? Ever since former Baltimore Ravens star Ray Lewis admitted a few months ago that he used deer antler spray (though subsequently denied it), the market for the stuff has exploded.

New ammunition in the battle to save North American bats from white-nose syndrome It’s been roughly eight years since white-nose syndrome (WNS) was first documented decimating bat populations in upstate New York. The disease is caused by the fungus Pseudogymnoascus destructans which colonizes hibernating bats' muzzles, ears and wings. It’s believed to kill by damaging the wing tissues that normally allow bats to regulate water loss during hibernation. The fungus also repeatedly wakes bats from hibernation, causing them to burn crucial fat reserves, leading to dehydration, emaciation and exposure. Click to enlarge

Prismatic How Men's Brains Are Wired Differently Than Women's Men aren't from Mars and women aren't from Venus, but their brains really are wired differently, a new study suggests. The research, which involved imaging the brains of nearly 1,000 adolescents, found that male brains had more connections within hemispheres, whereas female brains were more connected between hemispheres. The results, which apply to the population as a whole and not individuals, suggest that male brains may be optimized for motor skills, and female brains may be optimized for combining analytical and intuitive thinking. "On average, men connect front to back [parts of the brain] more strongly than women," whereas "women have stronger connections left to right," said study leader Ragini Verma, an associate professor of radiology at the University of Pennsylvania medical school. But Verma cautioned against making sweeping generalizations about men and women based on the results.

Brain-To-Brain Interfaces: The Science Of Telepathy Have you ever wondered what it would be like to walk a mile (or 1.6 kilometres) in somebody else’s shoes? Or have you ever tried to send a telepathic message to a partner in transit to “pick up milk on your way home”? Recent advances in brain-computer interfaces are turning the science fantasy of transmitting thoughts directly from one brain to another into reality. Studies published in the last two years have reported direct transmission of brain activity between two animals, between two humans and even between a human and a rat. These “brain-to-brain interfaces” (BBIs) allow for direct transmission of brain activity in real time by coupling the brains of two individuals. So what is the science behind this?

Biodiversity is not just about saving exotic species from extinc Starting Monday, celebrations and events across the world will highlight the beginning of the UN's Year of International Biodiversity and the loss of our richly varied flaura and fauna, which is estimated to be as high as 1,000 times the natural rate as a result of human activities. Ahmed Djoghlaf, the general secretary of the treaty signed by 192 countries since 1992 to protect biodiversity, is blunt about efforts to preserve the health of biodiversity since the Rio Earth summit 18 years ago. Governments worldwide have failed to meet the treaty's target of reversing the trend for declining biodiversity, he says, and urgently need momentum to hit its targets for 2020. Biodiversity is integral to our daily lives.

At the limit of Moore's law: scientists develop molecule-sized transistors Scientists have created a transistor made up of a single molecule. Surrounded by just 12 atoms, it is likely to be the smallest possible size for a transistor – and the hard limit for Moore’s law. The transistor is made of a single molecule of phthalocyanine surrounded by ring of 12 positively charged indium atoms placed on an indium arsenide crystal, as revealed in the scientific journal Nature Physics. DARPA's New Prosthetic Hand Lets Paralyzed Man "Feel" Sensations A 28-year-old who has been paralyzed for more than a decade has become the first person to “feel” physical sensations through a prosthetic hand that’s directly connected to his brain, the U.S. Department of Defense announced last week. He was even able to figure out which of his new mechanical fingers was being touched.

Kick, jump and play your way to renewable energy with these empowering products Soccer, or football as it's known in most countries and cultures, is the unequivocally most popular sport in the world. Globally, around 270 million people play the game. Here's another global trend that's considerably more grim: Nearly 1.2 billion people — almost one-fifth of humanity — lack access to reliable electricity. While these two statistics may seem unrelated, they were both trends that Jessica O. Matthews noticed while traveling throughout Nigeria, visiting family and observing the local culture.

Chest workout routine. Chest exercise pictures. By Lee Hayward Chest Anatomy The chest or pectoralis muscle is a large flat, fan shaped muscle that covers the entire upper rib cage. This House Costs Just $20,000—But It’s Nicer Than Yours For over a decade, architecture students at Rural Studio, Auburn University's design-build program in a tiny town in West Alabama, have worked on a nearly impossible problem. How do you design a home that someone living below the poverty line can afford, but that anyone would want—while also providing a living wage for the local construction team that builds it? In January, after years of building prototypes, the team finished their first pilot project in the real world.