How The Brain Rewires Itself 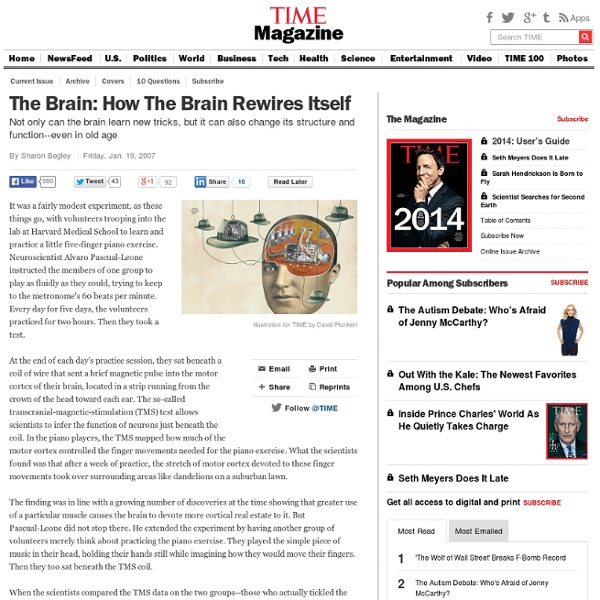 It was a fairly modest experiment, as these things go, with volunteers trooping into the lab at Harvard Medical School to learn and practice a little five-finger piano exercise. Neuroscientist Alvaro Pascual-Leone instructed the members of one group to play as fluidly as they could, trying to keep to the metronome's 60 beats per minute. Every day for five days, the volunteers practiced for two hours. Then they took a test. At the end of each day's practice session, they sat beneath a coil of wire that sent a brief magnetic pulse into the motor cortex of their brain, located in a strip running from the crown of the head toward each ear. The so-called transcranial-magnetic-stimulation (TMS) test allows scientists to infer the function of neurons just beneath the coil. The finding was in line with a growing number of discoveries at the time showing that greater use of a particular muscle causes the brain to devote more cortical real estate to it.

Neuroplasticity Contrary to conventional thought as expressed in this diagram, brain functions are not confined to certain fixed locations. Neuroplasticity, also known as brain plasticity, is an umbrella term that encompasses both synaptic plasticity and non-synaptic plasticity—it refers to changes in neural pathways and synapses which are due to changes in behavior, environment and neural processes, as well as changes resulting from bodily injury.[1] Neuroplasticity has replaced the formerly-held position that the brain is a physiologically static organ, and explores how - and in which ways - the brain changes throughout life.[2] Neuroplasticity occurs on a variety of levels, ranging from cellular changes due to learning, to large-scale changes involved in cortical remapping in response to injury. The role of neuroplasticity is widely recognized in healthy development, learning, memory, and recovery from brain damage. Neurobiology[edit] Cortical maps[edit]

Stimulating brain with electricity aids learning speed 20 September 2011Last updated at 11:52 By Leila Battison Science reporter The brain can change its structure in response to experience and practice Electrically stimulating the brain can help to speed up the process of learning, scientists have shown. Applying a small current to specific parts of the brain can increase its activity, making learning easier. How To Motivate People: 4 Steps Backed By Science Employees, spouses, kids — what does it take to get people motivated so you don’t have to nag them? Motivation is powerful. It predicts success better than intelligence, ability, or salary. Decision-Making and Control in the Brain Damage to the brain's frontal lobe is known to impair one's ability to think and make choices. And now scientists say they've pinpointed the different parts of this brain region that preside over reasoning, self-control and decision-making. Researchers say the data could help doctors determine what specific cognitive obstacles their patients might face after a brain injury. For the study, neuroscientists at the California Institute of Technology (Caltech) examined 30 years worth of data from the University of Iowa's brain lesion patient registry and mapped brain activity in almost 350 people with lesions in their frontal lobes. They linked these maps with data on how each patient performed in certain cognitive tasks.

Neurogenesis: How To Grow New Brain Cells Adults can still grow new brain cells — neurogenesis — but what are they for? For a long time scientists believed that neurogenesis was impossible: adults had all the brain cells they were ever going to have. Now we know that’s not true. In fact, we continue to grow new brain cells into adulthood. The race is on to find out what these brain cells are for and how we can grow more of them. A new review of the scientific literature, published in the journal Trends in Cognitive Sciences, argues that the growth of new cells aids adaptation to the environment (Opendak & Gould, 2015).

The neuroscientific study of hallucinogens Recently, an important and landmark paper was published in PLoS ONE (hooray open access!) titled, "Investigating the Mechanisms of Hallucinogen-Induced Visions Using 3,4-Methylenedioxyamphetamine (MDA): A Randomized Controlled Trial in Humans". It sounds daunting, but trust me, it's a very cool, approachable study. Now, in the spirit of full-disclosure, the lead author Dr. 7 Ways to Enhance Focus, Creativity, Productivity and Performance Back in my corporate lawyer days, there was one guy who everyone hated. Not because he was mean or underhanded or cut-throat. He was actually quite nice and always willing to help. People hated him because he was good. Superstar good.

UCSB scientists discover how the brain encodes memories at a cellular level (Santa Barbara, Calif.) –– Scientists at UC Santa Barbara have made a major discovery in how the brain encodes memories. The finding, published in the December 24 issue of the journal Neuron, could eventually lead to the development of new drugs to aid memory. The team of scientists is the first to uncover a central process in encoding memories that occurs at the level of the synapse, where neurons connect with each other.