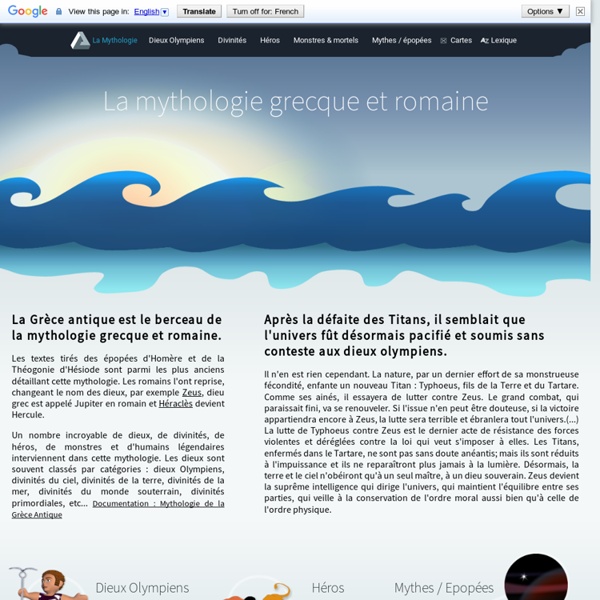 The Unofficial Ancient Roman Monster Survival Guide Posted on 22. Oct, 2013 by Brittany Britanniae in Latin Language, Roman culture Welcome to the Unofficial Ancient Roman Monster Guide! While, everyone knows about centaurs, harpies, cyclopes, mermaids, sirens, the chimera, hydra, giants, and et cetera; this guide’s goal is expose the truth of the monsters that hide under our very noses! The following monsters are very dangerous and should NOT be approached under any circumstance.

The Fool of the World and the Flying Ship The Flying Ship or The Fool of the World and the Flying Ship is a Russian fairy tale. Andrew Lang included it in The Yellow Fairy Book and Arthur Ransome in Old Peter's Russian Tales. Synopsis[edit] A couple had three sons, and the youngest was a fool. One day, the Tsar declared that whoever made him a ship that could sail through the air would marry his daughter. Acropolis Virtual Tour The Virtual Tour of the Acropolis is a web application based on HTML5 technologies (webGL and CSS3D) to display effectively panoramic photographic images in desktop and mobile browsers. The production of panoramic photomosaics at resolutions of several gigapixels was realised between 2010 and 2014 by employing established practices of digital image acquisition and processing. In order to achieve the best possible mapping of natural lighting on the monuments together with the display of shaded details, High Dynamic Range (HDR) imaging techniques were used for capturing and combining different exposure levels of the same theme. Starting from the RAW photos all the way up to the combined and color-corrected finalised panoramas, all intermediate outputs were maintained in order to be able to reproduce and control the entire manufacturing process for future reference. The krpano viewer and revelant tools are used for the display of the panoramic images within the application.

Aztec Gods - Who's Who The study of Aztec gods and Aztec religion has been the subject of a lot of speculation and misinformation. The sacrifices performed by Mexica priests at the Pyramids of the Sun and Moon are legendary. However, there's more to Aztec religion than just blood, though many of their rituals were bloody. Here's a look at some of the major Aztec gods in the pantheon and their significance in Aztec religion. The pantheon (numerous gods) of the Aztec civilization was enormous, with hundreds of gods and goddesses worshipped. Many of these gods were agricultural, since the culture relied heavily on farming.

How many Greek legends were really true? The culture and legends of ancient Greece have a remarkably long legacy in the modern language of education, politics, philosophy, art and science. Classical references from thousands of years ago continue to appear. But what was the origin of some of these ideas? 1. Was there ever really a Trojan Horse? The story of the Trojan Horse is first mentioned in Homer's Odyssey, an epic song committed to writing around 750BC, describing the aftermath of a war at Troy that purportedly took place around 500 years earlier. Culture - Before Marvel and DC: Superheroes of the ancient world Over the past few years, even the most ardent comic book nerd might have wondered if there were too many superhero movies playing in the local multiplex. For every Iron Man, or Avengers, there have been a couple of less-than Fantastic Fours and enough dubious Hulks to smash the sternest spirit. Studios keep making these films because they know audiences will flock to see them, even if the heroes include a raccoon and a tree. So the question this poses is: why are we so drawn to superhero stories? And since when?

Medb hErenn — The Supernatural Beings of Ireland he supernatural is not unique to Ireland, but it can sometimes seem that way, thanks largely to Hallowe'en. A contraction of "Hallow Even", and derived from All Hallows Eve, the night before All Saint's Day, it is based on the ancient Celtic festival of Samhain. This was the Celtic New Year and signaled the start of winter. LaunchPad: Ancient Greek Vase Production and the Black-Figure Technique Used for the storage and shipment of grains, wine, and other goods, as well as in the all-male Greek drinking party, known as the symposium, ancient Greek vases were decorated with a variety of subjects ranging from scenes of everyday life to the tales of heroes and gods. The two most popular techniques of vase decoration were the black-figure technique, so-named because the figures were painted black, and the red-figure technique, in which the figures were left the red color of the clay. The black-figure technique developed around 700 B.C. and remained the most popular Greek pottery style until about 530 B.C., when the red-figure technique was developed, eventually surpassing it in popularity. This video illustrates the techniques used in the making and decorating of a black-figure amphora (storage jar) in the Art Institute of Chicago's collection. Original video by ArtInstituteChicago. Embedded by Mark Cartwright, published on 04 April 2014.

Sacred Texts: Sexuality Sacred-texts home Hinduism Tantra PaganismBuy books about Sacred SexualityBuy books about Tantra Tantra Kama SutraAncient Sacred Sexuality Modern Rediscovery General Other Texts The dominant world religions treat sexuality as (at best) a distraction from the spiritual path. Archaeological Analogues (Roman Cements) – Geopolymer Institute Long-Term Stability of Geopolymeric Materials The task LONGTERM in the GEOCISTEM project dealt with the better understanding of long-term durability. It is difficult to predict extended durability on the basis of operating experience, laboratory experimentation and prototype testing. Two thousand years are generally accepted as a sufficient amount of time to permit decay of fission products that represent the most hazardous fraction in low-level rad-waste material. The present ongoing research involves geological, chemical and archaeological aspects by studying the durability of archaeological analogues and understanding their chemical make-up. Ancient Roman concrete structures like the Coliseo (2.000 years old) are still functioning today and thereby could provide historical documentation of the extended durability of geopolymeric cements.