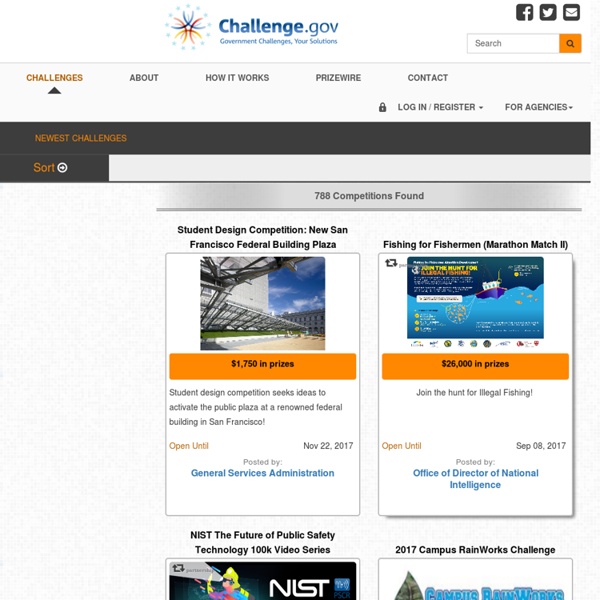 Travelers' Health - CDC Salte directo a la búsqueda Salte directo al listado de A-Z Salte directo a la navegación Salte directo al contenido Salte directo a las opciones de la página CDC Home CDC 24/7: Saving Lives. Protecting People. Microwork Microwork is a series of small tasks which together comprise a large unified project, and are completed by many people over the Internet. [1] [2] Microwork is considered the smallest unit of work in a virtual assembly line. [3] It is most often used to describe tasks for which no efficient algorithm has been devised, and require human intelligence to complete reliably. The term was developed in 2008 by Leila Chirayath Janah of Samasource. [4] [5] Microtasking[edit] Microtasking is the process of splitting a job into its component microwork and distributing this work over the Internet.

Flowing Data Tutorials How to Make a State Grid Map in R Something of a cross between a reference table and a map, the state grid provides equal space to each state and a semblance of the country to quickly pick out individual states. How to Make Animated Line Charts in R Sometimes it's useful to animate the multiple lines instead of showing them all at once. Open Government Initiative Open Data Policy Guidance to better manage Federal information as an asset to make it more open, accessible, and usable by the public. Executive Order on Making Open and Machine Readable the New Default for Government Information The President’s Executive Order on making Federal Government information more open and accessible to promote economic growth and government efficiency. National Action Plan for the United States of America

Crowdsourcing Crowdsourcing is a sourcing model in which individuals or organizations obtain goods and services. These services include ideas and finances, from a large, relatively open and often rapidly-evolving group of internet users; it divides work between participants to achieve a cumulative result. The word crowdsourcing itself is a portmanteau of crowd and outsourcing, and was coined in 2005.[1][2][3][4] As a mode of sourcing, crowdsourcing existed prior to the digital age (i.e. "offline").[5] Jesse James Garrett: Visual Vocabulary for Information Architecture Looking for more? My book The Elements of User Experience puts information architecture and interaction design in context for beginners and experts alike. You can now order the book from Amazon.com. version 1.1b (6 March 2002)

Allergy and Infectious Diseases The National Institute of Allergy and Infectious Diseases (NIAID) conducts and supports basic and applied research to better understand, treat, and ultimately prevent infectious, immunologic, and allergic diseases. For more than 60 years, NIAID research has led to new therapies, vaccines, diagnostic tests, and other technologies that have improved the health of millions of people in the United States and around the world. NIAID is one of the 27 Institutes and Centers of the National Institutes of Health (NIH). Since 1984, Dr.

Solver Develops Solution to Help Clean Up Remaining Oil From the 1989 Exxon Valdez Disaster Boston, MA and Cordova, AK - November 7, 2007 - InnoCentive, the leader in prize-based Open Innovation sourcing, is helping to make a positive impact on Environmental Conservation by working with the Oil Spill Recovery Institute (OSRI) and other conservation groups. OSRI has posted 3 Challenges on the InnoCentive website, all dealing with oil spill recovery issues. The first of these challenges was solved last week by an oil industry outsider who used his expertise in the concrete industry to come up with the winning solution. John Davis, an InnoCentive Solver from the Central United States, was awarded $20,000 for his creative solution. Information Design – isabelmeirelles.com Course description:The course introduces basic concepts, methods and procedures of information design with focus on mapping information. It investigates visual systems and information structures such as maps, graphs, charts and diagrams. Emphasis is placed on the exploration of conceptual and visual solutions, and on the creative process of organizing, visualizing and communicating information. The objective is to examine design solutions that make complex information easier to understand and to use by a specific audience. The course will be delivered as studio projects, individual and class critiques, lectures, –discussions, and readings. The course is required for Graphic Design majors, Department of Art + Design, Northeastern University.

Education Feature ASHG announces DNA Day essay contest winner Rachel Gleyzer, a tenth grade student at Bergen County Academies in Hackensack, N.J., took first place this year in the American Society of Human Genetics (ASHG) ninth Annual DNA Day Essay Contest. Crowdsourcing improves predictive texting - tech - 25 February 2012 SMARTPHONES may soon get a lot better at finishing your sentences for you - with the help of words and phrases gleaned from crowdsourcing. The software packages in today's phones often struggle with texts and voice commands if a user attempts words or phrases that aren't included in the phone's database. To see if the crowd could help, Keith Vertanen of Montana Tech in Butte and Per Ola Kristensson at the University of St Andrews, UK, called upon workers of the Amazon Mechanical Turk. The plan was to try and improve a predictive system used in Augmented and Alternative Communication (AAC) devices, which help disabled people to communicate by painstakingly typing out words interpreted from their muscle twitches or blinks. The researchers paid 298 Mechanical Turk workers to imagine phrases they might need if they had motor neuron disease or cerebral palsy.

Amnon P5 - Experiments with Processing by Amnon Owed 25 life-saving tips for Processing Posted by Amnon on January 28, 2012 · 37 Comments Well, perhaps they won’t literally save your life. But they surely will help you write your sketches easier, faster and more efficiently! This post will be covering tips, tricks and other need-to-know information about Processing. I’ve also included many runnable code examples. The World Factbook People from nearly every country share information with CIA, and new individuals contact us daily. If you have information you think might interest CIA due to our foreign intelligence collection mission, there are many ways to reach us. If you know of an imminent threat to a location inside the U.S., immediately contact your local law enforcement or FBI Field Office.