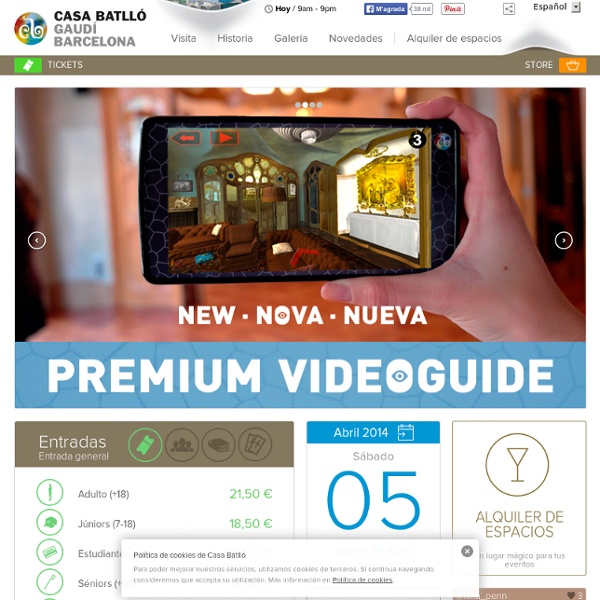 Pattern Lesson 1 Math Part Goals: To understand that symmetry is a human construction laid upon nature, to distinguish between the symmetric object and the symmetry itself, to understand that symmetries can be labeled, listed, and composed with each other, to construct examples of multiplication tables arising from this activity, and to see some cultural context for the math. From JOHN D. In India around 400 B.C., altars in shapes such as this were used for religious purposes. Another example of math and religion interacting is the mandala -- a design used for meditation. From JOHN D. Here symmetry is the crucial mathematical element. The symmetries of an object such as a mandala can be thought of as objects in themselves. 1. Dream-Catcher Mandalas Mathematical Art by Louis A. Mandalas pictures from Dover book. Each group has two mandalas, including a transparency of each. 1. This homework is due to at the start of class on July 1, in rough form.

BIG - Bjarke Ingels Group La Pedrera in Barcelona, Spain This undulating beast is another madcap Gaudí masterpiece, built in 1905-10 as a combined apartment and office block. Formally called Casa Milà, after the businessman who commissioned it, it is better known as La Pedrera (the Quarry) because of its uneven grey stone facade, which ripples around the corner of Carrer de Provença. Pere Milà had married the older and far richer Roser Guardiola, the wealthy widow of Josep Guardiola, and knew how to spend his new wife's money – Milà was one of the city’s first car owners and Gaudí built parking space into this building, itself a first. When commissioned to design this apartment building, Gaudí wanted to top anything else done in l’Eixample. The Fundació Caixa Catalunya has opened the top-floor apartment, attic and roof, together called the Espai Gaudí (Gaudí Space), to visitors. One floor below the roof, where you can appreciate Gaudí’s taste for parabolic arches, is a modest museum dedicated to his work.

Scroll Down for Colors Color is the most important part of interior decorating and as we are constantly finding color ideas everywhere we look, we need to be able to select color and make decisions to enhance the interior space we want to decorate. That entails choosing multiple colors, and can become overwhelming. That is why we have broken down the colors to show their color meanings, we profile, red, orange, yellow, green, blue, purple, black, white, gray and brown to help you understand how color makes us feel. This is an easy way to rule out some colors for our interiors. We also show how to combine these colors using the color wheel, this is a simple formula to enable you to make informed color scheme decisions, red schemes, orange schemes, yellow schemes, green schemes, blue schemes and purple schemes. An easy way to learn about color is by video, we now have a small series of color videos, available to watch online. Are you looking for color inspiration, see how we get inspired by color.

Fundació Joan Miró Asian Historical Architecture: a Photographic Survey MNAC: Museu Nacional d'Art de Catalunya | Parc de Montjuïc Sants-Montjuïc 08038 | Attractions | Time Out Barcelona Museu Nacional d'Art de Catalunya Time Out says 'One museum, a thousand years of art' is the slogan of the National Museum, and the collection provides a dizzying overview of Catalan art from the 12th to the 20th centuries. In recent years the museum has added an extra floor to absorb the section of the Thyssen-Bornemisza collection that was previously kept in the convent in Pedralbes, along with the mainly Modernista holdings from the former Museum of Modern Art in Parc de la Ciutadella, a fine photography section, coins and the bequest of Francesc Cambó, founder of the autonomist Lliga Regionalista, a regionalist conservative party. The highlight, however, is the Romanesque collection. The excellent Gothic collection starts with some late 13th-century frescoes that were discovered in 1961 and 1997, when two palaces in the city were being renovated. Address: MNAC. What's on at MNAC. Jo faig el carrer. Attractions and museums Rating: 4/5 I work the street.