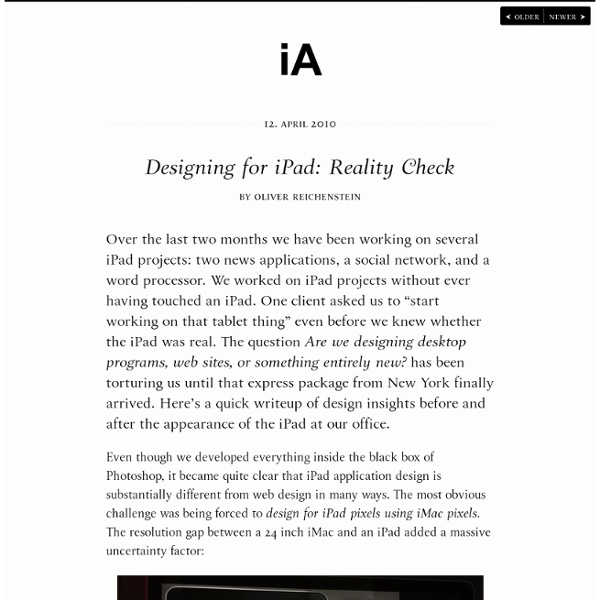 by Oliver Reichenstein Over the last two months we have been working on several iPad projects: two news applications, a social network, and a word processor. We worked on iPad projects without ever having touched an iPad. Even though we developed everything inside the black box of Photoshop, it became quite clear that iPad application design is substantially different from web design in many ways. 1. The obvious issue with the resolution gap is typography. Is the font big enough? …we had no choice but to print out 1:1 scale mockups. Reality check: Wow, this thing is sharp! After two months of printing, we did get the typography pretty much right, but there was another surprise waiting for us: The sharpness. Web body text sizes (14-16px) feel too small on iPad, while bigger sizes clash with the canvas dimensions. The iPad’s resolution is higher than a regular LCD but still lower than an iPhone, which gives the pixel type an unusual “in between” feel. 2. Dubious UI guideline principles 3.

for iPad is here! Two months ago, we sat glued to our browsers as details of the iPad started streaming out of Apple’s launch event. It didn’t take us very long to formulate our official strategy for the new device: we were going to support the hell out of it, and we had 60 days to do it. Today is iPad launch day and as long lines start to form outside of Apple stores and UPS-Santa makes his rounds to sleepless geek households, we’re happy to say that Evernote for the iPad is live in the Apple AppStore! The new Evernote version (3.3) for Apple’s mobile devices is a universal binary that will run on all iPhone, iPod Touch and iPad devices. There aren’t many changes for iPhone / iPod Touch users in this version, but if you run it on an iPad you get a completely new user experience. Something to hold Designing the new interface was a daunting task. What should it be? We tried taking our existing iPhone UI and making it bigger. Things to try Views Scroll through all your notes in the “All notes” screen. Places

Mac OS X Human Interface Guidelines: About the Guidelines for Creating Great Mac OS X Apps Mac OS X Human Interface Guidelines describes the characteristics of the OS X platform and the guidelines and principles that help you design an outstanding user interface and user experience for your Mac app. Mac OS X Human Interface Guidelines does not describe how to implement your designs in code. When you’re ready to code, start by reading Mac App Programming Guide. At a Glance Aqua is the overall appearance and behavior of OS X. Interface Builder (a graphical UI editor in Xcode) is the best way to begin building an Aqua-compliant user interface. Great Apps Begin with an Understanding of the Fundamentals Before you begin designing your app, you need to get a feel for the OS X environment. Most people are not acquainted with the principles of human interface design, but they can tell when apps follow the guidelines and when they don’t. People Expect a Great User Experience that Integrates OS X Technologies OS X users have high standards for the apps they run. How to Use This Document

iPad 2 - is it True The condescending UI I have a kneejerk reaction to most modern computer user interfaces (also, all microwave user interfaces). I've used plenty of excuses over the years: my "eye for design," my love of minimalism, a sense of utility. Today, I finally put my finger on it, and it's not just a desire for the-computer-as-pure-machine, or a spartan aesthetic. It's quite simple, really: I don't like the condescending tone. Growing up I was always very small for my age. I didn't mind the size ("the bigger they are, the harder they fall!" My problem with many modern UIs is that they never get past the telling phase. An example of this is the dramatic, quasi-utilitarian animated transition. But it's not just functionality, there's something deeper that bugs me, about the decorations themselves. And of course, there is the transgression of the century: Apple's downward spiral into overt 1:1 metaphors. For reference, here's where we started: Oh, how "far" we've come!

30 Useful iPad Apps for Business & Presentation Apple sold more than 1 million copies of iPads in the first 3 months. This gadget is definitely more than just a larger version of iPhone or iPod touch. With 4x the screen of an iPhone, the iPad’s display is ideal for reading and for presentations. In today’s post, we’d like to highlight some really useful iPad applications that might replace the things you do daily with your laptop or netbook. With a piece of iPad and these applications, you probably don’t need to carry a laptop around. Here are 30 useful iPad applications for Business and Presentation you might find handy on your next project pitch or business trip. Full list after jump. Presentations KeynoteKeynote is the most powerful presentation app ever designed for a mobile device. CorkulousCorkulous is incredible idea board for iPad to collect, organize, and share your ideas that feel completely natural. Power Presenter This application is used for Presentation. Graph, Charts, Diagram & Statistic Planning Page & Documents Meetings