How to Make An Inexpensive Light Tent – DIY 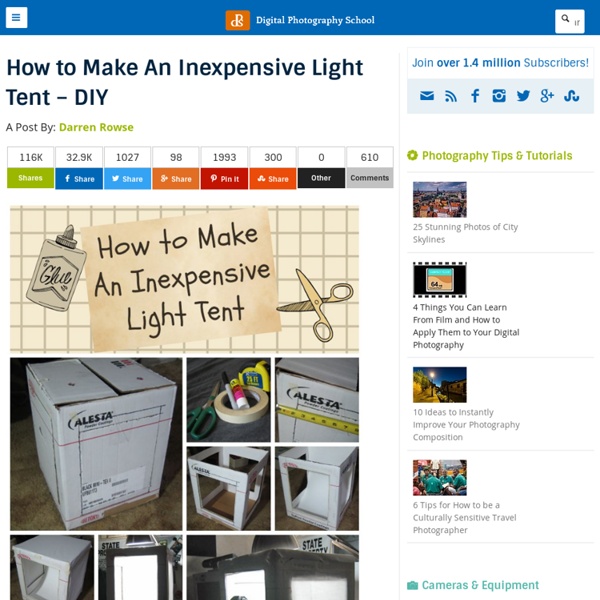 The following tutorial on constructing an Inexpensive Light Tent was Submitted by Jeffrey Bail over at our Forums. I thought it was well worth highlighting here on the main blog too! See Jeffrey’s Flickr Account here. If you’re like me, you don’t want to spend money if you can do it yourself and yield the same results. I was going to purchase it until I saw the $100 price tag. Materials Needed: 1.) 2.) 3.) 4.) 5.) 6.) Also suggest a lighting fixture. 7.) Now that you have the Materials I will show you out to make a light tent step by step. Step By Step Process: A) Take your box with a tape ruler and marker and measure in 2″ from the side of the box marking multiple points with your marker. B) Cut out the boxes you’ve drawn. C) Now take your Bristol board and make lines with your marker for every two inches 16 times. D) Glue the paper strips into the box. F) Place the long piece of Bristol board into the box to where the piece curves to the bottom. Camera sticking into the box Related:  nihalsen • po mojemu

How To Make A Copper Wire Ring The ring I made before went well so I wanted to play around with that some more. Here I have a gauge 22 and 18 wire. The smaller the number the thicker the wire. Yes, it’s a handle of some sort. This end makes a bigger ring, something like a size 8. the other end has a metal collar and is more like a size 6 1/2 – 7. The beads I used today are a semi-precious amethyst and they fit both wire sizes. This is the 18 gauge which I’m wrapping twice. Work one bead at a time. Once strung with a bead each wire goes behind in the opposite direction. Like so. Time to put the ring back on our “form”. Now you want to make the wire and beads symmetrical. I prefer smaller ones so I snipped mine to an inch. With the thicker wire especially I need to get the spiral into my flat nosed and really crank. This spiral will sit below the top bead. Again, what you did with your first spiral do the opposite with the other. One in both sizes, each a little different. Click Here to view the original post:

EuroScreenwriters - Interviews with European Film Directors - Carl Theodor Dreyer More on Carl Theodor Dreyer [01] [02] [03] [04] The Tyrannical Dane By Paul Moor, from Theatre Arts Magazine, April 1951 A public library reading-room is not the place one would ordinarily expect to find a film director. Dreyer's films, with one exception, have never attracted large audiences. Although Dreyer works in a field which has become inextricably associated with artificiality, trickery, and commercialized hoopla, his films have the personal, almost austere cohesion and integrity which mark them as the expressions of a single, quite extraordinary personality. Dreyer's major works have all been concerned with anguish and horror, and his methods of achieving these effects have caused some hard feelings among his actors. Just as the divided critics of "Day of Wrath" seemed to be discussing two different films, anyone who meets Dreyer off the set wonders whether this can be the same man whose terrorized actors speak of him with such a show of strong feeing.

Skills to Pay the Bills Fireworks howto Do you want to know how to photograph fireworks? With 4th July just days away I thought I’d refresh this article in which I give 10 Fireworks Photography tips to help you get started. Fireworks Displays are something that evoke a lot of emotion in people as they are not only beautiful and spectacular to watch but they also are often used to celebrate momentous occasions. I’ve had many emails from readers asking how to photograph fireworks displays, quite a few of whom have expressed concern that they might just be too hard to really photograph. My reason for this advice is that back when I bought my first ever SLR (a film one) one of the first things I photographed was fireworks and I was amazed by how easy it was and how spectacular the results were. Of course it’s not just a matter of going out finding a fireworks display – there are, as usual, things you can do to improve your results. Here are the steps you’ll need to work through to photograph fireworks: 1. 2. 3. 4. 5. 6. 8. 9. 10.

No Slip Bookmark Tutorial I have so many books requested at the library right now! I love books they may be my favorite thing, but bookmarks I have an issue with. I've always been a dog ear person (you know, folding down the top corner of the page to mark my spot). Bookmarks always fall out then I have no clue where I was. But I don't like to dog ear books that don't belong to me (or even some that do). I love it because it fits all different size books. Sew a length of ribbon around a hair tie, attach a button on the other end (I gathered the ribbon under the button for interest) and your set! By using our thomas sabo chains and dental insurance facility, you can carry your anne klein watches anywhere along with you.

Georges Polti's 36 Dramatic Situations Disciplines > Storytelling > Plots > Georges Polti's 36 Dramatic Situations Georges Polti was a 19th century French writer described 36 situations that may be found in many stories, based on the list identified by Goethe who said it was originated by Italian Carlo Gozzi (1720-1806). Perhaps some of the themes and examples do betray a bias towards the stories of the day, yet they are still very useful stimuli and provide interesting examples of enduring and real human dilemmas. Here are his 36 situation, including a discussion on each one: Although this has been taken as definitive by some and Polti initially said there was 'exactly 36 dramatic situations ... and therein we have all the savour of existence', he later admitted that there could be more or less than this (it all depends on your criteria for division). Polti, Georges. (1916).

Prace domowe #3 | Nebule|blog edukacyjny Dziś pokażemy pomoc, do której wykonania potrzebujemy: pudełko, patyczki kreatywne (lub po lodach), duże nożyce. Zajęło to minutę, a Lila była zajęta przez pół godziny. Zauważyłam wczoraj, że zaczęła dopasowywać przedmioty ze względu na kolor i w następnym tygodniu zmodyfikuję poziom trudności tej pomocy. Na pudło nakleję z papieru samoprzylepnego kółka, tak aby każdy patyczek był dostosowany kolorystycznie do dziury. *Znawcy metody pewnie zapytają gdzie jest nasz dywanik;) Jest na długie liście zakupów do Ikei. Niestety nie jest nam po drodze. Sharp Images howto A Post By: James Brandon One very common question I get from photographers is why they can never get their images as sharp as the ones they see online. This is a loaded question, and it really made me think about all the things I go through to get tack sharp focus on my images. Sure there are the obvious tips like holding the camera properly, squeezing the shutter instead of stabbing it, tucking your elbows in, and so on. Let me start off by saying that I still take blurry images from time to time. Back Button Auto-Focus I can honestly say that about 90% of the photographers I talk to don’t use this built in feature on almost all cameras. On most (nearly all) cameras, there is a button on the back of the camera titled “AF On.” Read more about Back Button Focus in James’ post – 3 Reasons Why You Should Switch To Back Button Focus Single Point AF If your subject is 10 feet away and you’re shooting f/2.8 at 200mm, your depth of field is only 1 1/2 inches deep! AI Servo Focus Tracking

thelongthread.com Tired of the Boring Old Three Point Lighting? An Alternative Setup To The Rescue | Big League Film School The headshot, the interview, the portrait lighting we all have to film time and time again . . . it can get quite boring, and often my instincts tell me that you just can’t light by a standard formula. Lighting Techniques should be fluid. The best cinematographers don’t follow a formula. Nothing is better then seeing a master give the middle finger to the “rules” and create awesome stuff. Watch below to learn an alternative method to the boring old three point lighting technique and then keep reading: Tired of the Boring Old Three Point Lighting technique? So as you noticed you can get a wonderful contrast on the face by having your fill light on the SAME side as your key light. Also, negative fill is something you should be experimenting with since taking light away is just as much a necessity and a science as adding light. Don’t forget, highlights and blown out windows in the background, though you need to be careful to keep it tasteful, is completely acceptable and can look gorgeous.

Prace domowe #7 | Nebule|blog edukacyjny Dziś post z serii Montessori w domu. Pomoc wykonałam w 15 minut, a koszt to 5 zł. Zadanie na pozór proste, ale nie do końca. Zadaniem dziecka jest przewlekanie guzika przez kawałki filcu. Zadanie można modyfikować przez stworzenie wzornika. Podczas pracy z tą pomocą dziecko doskonali koordynację ręka-oko i może to być wstęp do nauki zapinania guzików. Na zakupy do takich pomocy polecam sklep Paperconcept i Empik dof guide "I found the ExpoAperture incredibly easy to use and understand. Once you get the steps down, it makes figuring out depth of field simple and much more accurate than ever before. ExpoAperture would be a great tool for the classroom, and in fact they make a large size that can be used in the classroom setting." "The DOF Guide is designed just as much as a field tool as it is a teaching tool, and I found myself playing with it just to make some what-if calculations on various format and lens combinations. The ExpoAperture2 Depth of Field Guide is a versatile and unique tool which instantly shows you the relationships between focal length, focus distance, aperture and resulting depth-of-field. A photographer using the ExpoAperture2 Depth-of-Field Guide simply selects the camera’s sensor or film size and desired focal length for a given shot. What is Depth of Field? As a concept, depth-of-field is poorly understood by many beginning and amateur photographers. Features

MADE: TUTORIALS by Dana on July 2, 2008 Click an image below for step-by-step instructions and easy sewing projects. Don’t worry…we won’t leave you hanging! We’ve got all the nitty gritty details. NOTE: If you’re looking for PATTERNS, they’re in the SHOP Leave a Comment Previous post: Advertise Next post: for ME SUBSCRIBE to MADE via EMAIL Enter your email address:Delivered by FeedBurner Purchase my new BOOKS! | Copyright © 2014 MADE * All Rights Reserved | Web Hosting By RFE Hosting WordPress Admin