A user's guide to art-speak 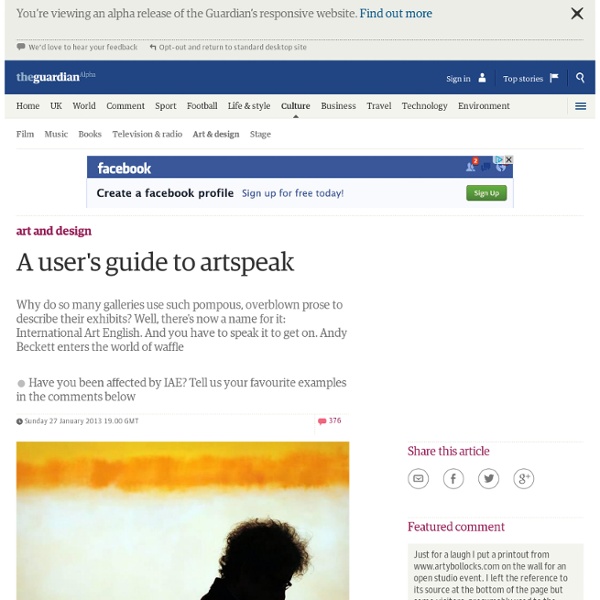 The Simon Lee Gallery in Mayfair is currently showing work by the veteran American artist Sherrie Levine. A dozen small pink skulls in glass cases face the door. A dozen small bronze mirrors, blandly framed but precisely arranged, wink from the walls. In the deep, quiet space of the London gallery, shut away from Mayfair's millionaire traffic jams, all is minimal, tasteful and oddly calming. Until you read the exhibition hand-out. If you've been to see contemporary art in the last three decades, you will probably be familiar with the feelings of bafflement, exhaustion or irritation that such gallery prose provokes. With its pompous paradoxes and its plagues of adverbs, its endless sentences and its strained rebellious poses, much of this promotional writing serves mainly, it seems, as ammunition for those who still insist contemporary art is a fraud. David Levine and Alix Rule do. IAE always uses "more rather than fewer words". The mention of interns is significant.

Hyperreality In semiotics and postmodernism, hyperreality is an inability of consciousness to distinguish reality from a simulation of reality, especially in technologically advanced postmodern societies. Hyperreality is seen as a condition in which what is real and what is fiction are seamlessly blended together so that there is no clear distinction between where one ends and the other begins.[1] It allows the co-mingling of physical reality with virtual reality (VR) and human intelligence with artificial intelligence (AI).[2] Individuals may find themselves for different reasons, more in tune or involved with the hyperreal world and less with the physical real world. Some famous theorists of hyperreality/hyperrealism include Jean Baudrillard, Albert Borgmann, Daniel J. Boorstin, Neil Postman and Umberto Eco. Origins and usage[edit] Hyperreality can also be thought of as "reality by proxy"; simply put, an individual takes on someone else's version of reality and claims it as his or her own. Existenz

Welcome to Creative Skillset - Skillset Failure by Design by Paul Rand Because design is so often equated with mere decoration, it is safe to assume that few people understand what design means or the role it plays in the corporate world. Graphic design pertains to the look of things — of everything that rolls off a printing press, from a daily newspaper to a box for corn flakes. It also pertains to the nature of things: not only how something should look but why, and often, what it should look like. Why then do design programs in large corporations seem to be going out of style? One rarely hears of the program that put Westinghouse on the design map. When my friend Giovanni Pintor left his company, the character and special quality of Olivetti design no longer reflected the same passion and brilliance of an almost never-ending stream of graphic design works. Without the enthusiasm of Adriano Olivetti, its founder, there might never have been a design program. But is poor design exclusively the domain of the CEO?

PVAC Employability ▼ STEP 1: Decide what you want to do - click the red links At the University of Leeds we aim to help you make well-informed choices, based on understanding of yourself, the wide range of opportunities available and the steps you need to take to pursue your choices. If you have not yet decided what you want to do, then click on the RED links below to help you make some informed choices. ▼ STEP 2: Plan how you're going to gain the skills and experience you need - click the amber links Working with personal tutors, and supported by Leeds for Life1, you need to identify the skills you're gaining through your course, and find co-curricular opportunities, such as work placements and internships, to get experience, meet potential employers, and develop knowledge that you need for your chosen career. ▼ STEP 3: Compete for the career you want - click the green links

Stargate and Ester Dean, Making Music Hits On a mild Monday afternoon in mid-January, Ester Dean, a songwriter and vocalist, arrived at Roc the Mic Studios, on West Twenty-seventh Street in Manhattan, for the first of five days of songwriting sessions. Her engineer, Aubry Delaine, whom she calls Big Juice, accompanied her. Dean picked up an iced coffee at a Starbucks on Seventh Avenue, took the elevator up to Roc the Mic, and passed through a lounge that had a pool table covered in taupe-colored felt. Two sets of soundproofed doors led to the control room, a windowless cockpit that might have been the flight deck of a spaceship. Tor Hermansen and Mikkel Eriksen, the team of Norwegian writer-producers professionally known as Stargate, were waiting there for Dean. Most of the songs played on Top Forty radio are collaborations between producers like Stargate and “top line” writers like Ester Dean. The top-liner is usually a singer, too, and often provides the vocal for the demo, a working draft of the song. How did this happen?

Maria Popova: why we need an antidote to the culture of Google | From the Observer | The Observer You describe yourself as a "curator of interestingness" and run a website from New York called Brain Pickings, which covers all things curious and inspiring – books, art, science, photographs etc. What's the common denominator for publishing something? If something interests me and is both timeless and timely, I write about it. Much of what is published online is content designed to be dead within hours, so I find most of my material offline. With 1.2 million readers a month and 3m page views, your site would be a good place to advertise, but, instead, you ask readers for voluntary contributions. There's a really beautiful letter that a newspaper journalist named Bruce Bliven wrote in 1923 to his editor. Why do people pay for what they can get for free? Part of it is that people form an emotional relationship with the site and have a sense of belonging and take pride in being able to support something they enjoy. Contribution-based podcasts and websites are becoming more common. I do.

Wild Things: What Was Abstract Art? Sometime around 1912, painting changed. Artists from Moscow to Westport, by way of Munich and Paris, began making abstract works. “Observers spoke of the exhilaration and terror of leaping into unknown territory,” Leah Dickerman writes in the catalog for “Inventing Abstraction, 1910–1925: How a Radical Idea Changed Modern Art,” the monumental exhibition she has curated at the Museum of Modern Art in New York City, on view through April 15. About the Author Barry Schwabsky Barry Schwabsky is the art critic of The Nation. Also by the Author The Guggenheim’s Futurism exhibition and the Whitney Biennial offer competing visions of present-mindedness. Ambitious beneath his pose of indolence, James McNeill Whistler was the most contradictory of artists. Sometimes I think that indefinability is the defining feature of abstraction: if you can identify what a painting depicts, then it’s not abstract. At other times, I think the opposite.

Plain or Fancy? A new exhibit at New York's Metropolitan Museum of Art I tried, really I did. But with a vintage Braun coffeemaker and Muji soap dishes, was there any chance I would prefer the items on the Fancy side of the Metropolitan Museum of Art’s tiny new exhibit, “Plain or Fancy? Restraint and Exuberance in the Decorative Arts”? Not really. I stood in front of the Dutch seventeenth-century nautilus cup—a pearly shell the size of a softball, surmounted with a golden Neptune riding a whale, out of whose mouth Jonah emerges (must not have been against the rules to mix mythologies). I wished the mount away. The “Plain or Fancy?” The most interesting objects in “Plain or Fancy?” In the center of the gallery, the curators, Luke Syson and Ellenor Alcorn, placed a series of objects with dueling “Plain” and “Fancy” texts on opposite sides of the cases. But the tureen raised a nagging question. Images courtesy of the Metropolitan Museum of Art.