Why French Parents Are Superior by Pamela Druckerman 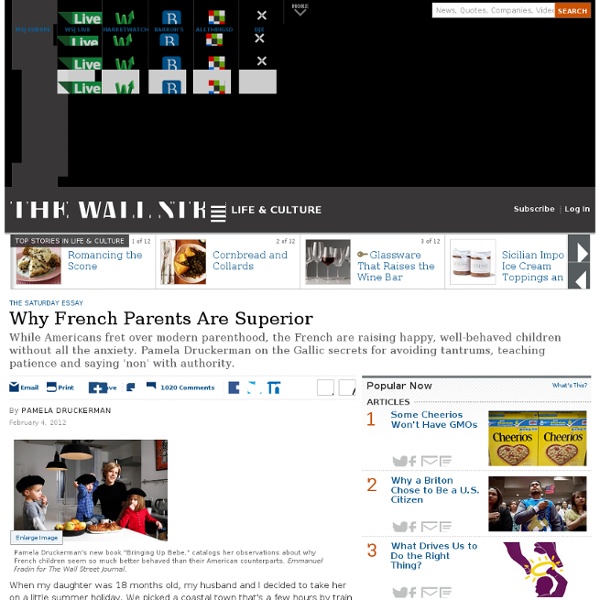 30 Books I’m Glad I Read Before 30 - Aurora In various ways, these 30 books convey some of the philosophy of how Angel and I live our lives. I honestly credit a fraction of who I am today to each title. Thus, they have indirectly influenced much of what I write about on this site. A medley of both fiction and nonfiction, these great reads challenged my internal status quo, opening my mind to new ideas and opportunities, and together they gave me a basic framework for living, loving, learning and working successfully. If you haven’t read these books yet, I highly recommend doing so. Stumbling on Happiness by Daniel Gilbert – Gilbert, a Harvard professor of psychology has studied happiness for decades, and he shares scientific findings that just might change the way you look at the world. What are your favorite books? Photo by: Katie Harris

Womb to World: A Metabolic Perspective - by Suzanne Colson © 2002 Midwifery Today, Inc. All rights reserved. [Editor's note: This article first appeared in Midwifery Today Issue 61, Spring 2002.] Postnatal transition from fetus to neonate is characterised by discontinuity. Inevitably the neonate must change environment from the dark, warm, wet, sheltered place in the womb to the colder, dry, bright, loud conditions of the world; the umbilical cord is severed. Separation and rupture are the watchwords. Cardiopulmonary, immune and thermal adaptations are well documented in the medical and midwifery textbooks. Just as neonatal heart rate, respirations and colour make cardiopulmonary transition tangible for midwifery assessment, neonatal nutrition offers a window into the assessment of metabolic adaptive processes. Metabolic transition is not generally taught in midwifery and medical curricula as part of normal postnatal adaptation from fetus to neonate. Exclusive Breastfeeding Physiology of Metabolic Transition What is Neonatal Hypoglycemia?

The Reactionary - Magazine The charming, sinister G. K. Chesterton Keystone/Getty Images Professor Ker’s spirited and double-barreled attempt at a rehabilitation of his cherished subject is enjoyable in its own right, and takes in such matters as Chesterton’s dialectical genius for paradox, the authority of the Father Brown stories in the detective genre, and the salience of Charles Dickens in the English canonical one. In his obituary, T. Aiming off an early line (“The cold queen of England is looking in the glass”) as a kind of establishing shot, Chesterton presses on to conscript all the images of sullen northern Protestant indifference in the face of the sultan’s mobilization: St. In one rather gallant stave, then, the finer aspects of Christendom detach themselves from the frigid dogmas of the Reformation, and reproclaim the magnificence of the Crusades. Our patch of glory ended; we never heard guns again. All conservatism is based upon the idea that if you leave things alone you leave them as they are.

10 things that parents should never say to their children | SingaporeScene Things to never tell your children. (Getty Images) Through my work, I’ve had the privilege of speaking to and working with thousands of students, young adults and parents. Two things have become painfully obvious to me. First, it’s extraordinarily difficult to be a world-class parent. Second, a significant proportion of students and young adults’ frustrations are caused by their parents. I’m not a parent myself, but I’ve observed what many parents say to their children, which can negatively impact them—sometimes for life. From a child and a student’s perspective, here are 10 things that parents should never say: 1. It’s shocking how many parents say this to their children in a fit of anger. This is the type of phrase that can scar children deeply, and can make them doubt their worth as a human being. 2. As a parent, you might feel like you really do know what’s best for your children, but using this phrase is not at all effective in convincing them that you're right. 3. 4. 5. 6. 7. 8. 9. 10.

10 Reasons to Become Self-Sufficient & 10 Ways to Get There | Wake Up World - Aurora By Michael Edwards and Jeffrey Green Activist Post We are now three to five generations removed from the rural backbone that strengthened America. The world at large has undergone a similar transformation as the promise of easier work has created a migration to big cities. These mega-cities could be seen as an experiment gone awry, as general well-being has declined, with suicide rates increasing across the world. The economic crisis we are living through has been the final straw for many people, as promises of a better, easier, and more creative life seem to have been sold to us by carnival-style tricksters who are laughing all the way to (their) bank. Here are the top reasons for becoming self-sufficient; these are based on fundamental, systemic concerns for why undertaking this life change will not be a fly-by-night fad, but rather a long-lasting means for personal independence. Click the below picture for a Wake Up World Only Exclusive Special Offer 10 Reasons to Become Self-Sufficient

Unschooling is Not That Difficult, Folks I just got home from some errands, sat down at my computer, and found a rollicking discussion going on on the Radical Unschooling Info page on facebook. It starts with a link to an article by Pam Sorooshian, on her blog. The article is "Unschooling is not "Child-Led Learning"." Pam makes some excellent points, and I may get to them in a minute, but mostly, I want to comment on the responses to that article. Between the time it was posted (4 hours ago) and when I first saw it (half an hour ago) there were over 50 comments. At first, as I was reading through them, there were several comments that I wanted to respond to. For some reason, many, many people fight and resist understanding unschooling for a very long time. It's fascinating to observe. The most fascinating part is that people seem to want to complicate something that is, at the heart of it, very simple. Those are two EXTREMELY different images of the same concept. And that is only ONE of the concepts that splits across that divide.