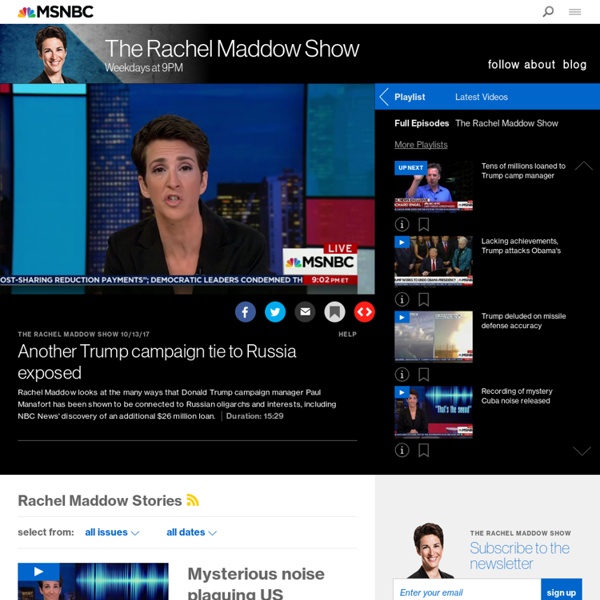 Map - Your Local Fusion Center Fusion centers -- places for state, local and federal officials to share and analyze information -- sprang up at the local level in the wake of the post-9/11 complaints about the failure to "connect the dots." In 2003, the federal government began contributing funding; to date, the Department of Homeland Security has provided more than $420 million in funding to 72 fusion centers across the country, but some localities have funded additional centers. Fusion centers are built upon the idea of cops on a beat -- local authorities will recognize potential threats to their communities and feed the system with intelligence about possible terrorists. But critics charge that the imperative to gather as much information as possible can lead to abuses and misinformation that can get into national databases.

News Videos: Top News & Daily Political News Videos // Current To Our Faithful Current.com Users: Current's run has ended after eight exciting years on air and online. The Current TV staff has appreciated your interest, support, participation and unflagging loyalty over the years. Hardball: Inclusion, equality highlighted in Obama’s inaugural address now playing Bundy doubles down on controversial commentsup next How will the Bundy saga wind down? Jeopardy contestants forget Herman Cain Running on, not away, from Obamacare Boehner mocks GOP over immigration reform The He-Coon who changed Jeb Bush’s future GOP leaders back away from Bundy Stewart, Hannity feud over Bundy heats up Ted Cruz, Mike Lee take shopping trip What did Hillary Clinton accomplish at State? Hope for a world one day without AIDS Kornacki on Hillary Clinton’s smartest move A look into the latest Bridgegate subpoenas Christie takes swipe at Letterman Rand Paul’s ‘inconvenient’ truth about Reagan Stewart vs Hannity over the Bundy Ranch New polls show tight races in Southern states Kornacki: Give Rand Paul some credit Reid: SCOTUS’ conservative path to injustice Memorable ads fill 2014 campaign cycle Tea party posed to strike big in 2014? The push to run on, not away from, Obamacare

Facebook, the CIA, and You. // Brainsturbator After over a decade of being immersed in the conspiracy theory culture—and I’m still there wether I like it or not—my core beef remains the same. It’s not something unique to conspiracy research. It’s a universal problem with all true believers: exaggeration for dramatic effect. Subtlety is interesting. Details are brainfood.

SlateV The Lake That Fell Off a Cliff Every Single 1989 Special Guest Taylor Swift Brought Onstage How to Grow Potatoes on Mars Farewell Lindsey Graham, A Slate Tribute President Obama's War on Christmas Guitar Lesson - Sacred Geometry: Simplifying the Fretboard by Jude Gold & Pat Martino (in collaboration with Guitar Player Magazine) If there’s one common misconception people have about geniuses, it’s the notion that these stellar intellects engage only in the most strenuous of thought; that in order to even hold a conversation with one of these brainiacs you need an Ivy League PhD, an IQ of 200 or more, and a bulbous cranium that makes you look like a character from Star Trek. In reality—as brilliant inventions such as the wheel, the light bulb, the magnetic guitar pickup, the TV dinner, and the Pet Rock all so vividly prove—the most ingenious ideas are often the simplest. And if the mark of true genius is the ability to find simple, head-slapping, gosh-why-didn’t-I-think-of-that solutions to complex problems, then Pat Martino is truly one of the guitar’s cleverest minds. “The guitar is structured like no other instrument,” states Martino, “and it unveils itself in a unique way.

Up w/ Chris Hayes: The key force in the Obama administration: Joe Biden now playing NBA investigating authenticity of tapeup next Can GOP win over more women voters? Will abortion drive the gender gap in 2014? How one billboard could change campaigns Has Cuomo alienated the Democratic base? How economic liberalism is fueling Democrats Unions and tea party find common ground What’s driving GOP opposition to common core? The South rises again... for Democrats? A closer look at US Senate races in the south Obamacare and Kentucky’s 2014 Senate race A ‘truly groundbreaking election’ What if Northwestern players don’t unionize? Ontology after Quine Bio. I moved to Hamburg having spent three years as a “Juan de la Cierva”researcher at the University of Barcelona, where I was a senior member of the LOGOS Grup de Recerca. Prior to my stint in Barcelona, I was a lecturer in the Faculty of Philosophy and the University of Cambridge, before which I held two postdoctoral research fellowships at the Centre for Metaphysics and Mind, which is attached to the Philosophy Department at the University of Leeds. The first of these was funded by the lovely people at the Analysis Trust.

American Thinker: Useless Eaters While Americans worry over government insurance plans, longer waits for treatment, and "healthcare rationing," a more sinister agenda lurks in the shadows of the healthcare bill now before the House of Representatives. Today's Medicare recipients could be the first to experience our government's new solution to America's "useless eaters." Section 1233 of HR 3200, the healthcare reform measure under consideration, mandates "Advance Care Planning Consultation." Under the proposal, all senior citizens receiving government medical care would be required to undergo these counseling sessions every five years. Further reading of the law reveals that these sessions are nothing more than a not-so-veiled attempt to convince the elderly to forego treatment. HR 3200 calls outright for these compulsory consultations to recommend "palliative care and hospice."

Washburn WD32SCE Everyone knows Washburn produces some damn fine electric guitars: the awesome Idol Series and Nuno Bettencourt's N-Series guitars have all triggered spontaneous moistening of undergarments in the TG office. But will its acoustic guitars have the same effect on our laundry - or will it just dampen our enthusiasm? Let's strip down that WD32SCE model name. The Last Word now playing ‘Guns everywhere’ in Georgiaup next Georgia governor signs extreme gun bill GOP still fending off Medicaid expansion Rand Paul fact-checks Reagan’s record Twitter hijacks the NYPD’s hashtag Boy Scout troop loses charter over gay leader The GOP’s medicine for their 2016 woes The politics of pot Bob Dole: Ted Cruz not ready to be POTUS In losing campaigns, consultants still win Conservatives attacking Chelsea Clinton Kerry warns Russia on Ukraine crisis Political Lies and the First Amendment Will Dems ‘stay the course’ on Obamacare? Christie’s Father of the Year The deaths of 477 Florida children Lesbian police chief fights for her job Liberals and retiring from the Supreme Court New 2014 strategy for Dems? Run on Obamacare Benefits and dangers of a good primary Lesbian couple sues NC over marriage ban ‘Glimmer of hope’ in Ukraine?