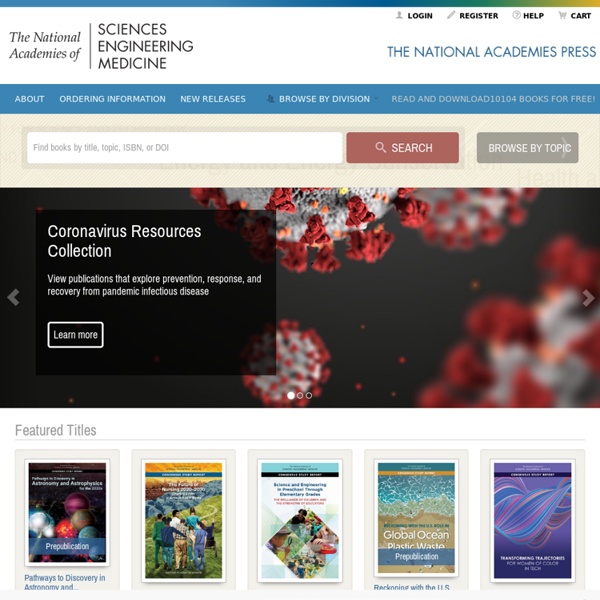 Abrupt Impacts of Climate Change is an updated look at the issue of abrupt climate change and its potential impacts on the physical climate system, natural systems, and human systems. This report summarizes the state of our knowledge about potential abrupt changes and abrupt climate impacts and categorizes changes that are already occurring, have a high probability of occurrence, or are unlikely to occur. [read more] In the United States, approximately 14 million people have had cancer and more than 1.6 million new cases are diagnosed each year. However, more than a decade after the IOM first studied the quality of cancer care, the barriers to achieving excellent care remain daunting. Delivering High-Quality Cancer Care: Charting a New Course for a System in Crisis presents a conceptual framework for improving the quality of cancer care.

Introduction to Cosmology Cookies on the New Scientist website close Our website uses cookies, which are small text files that are widely used in order to make websites work more effectively. To continue using our website and consent to the use of cookies, click away from this box or click 'Close' Find out about our cookies and how to change them A Collection of Social Network Stats for 2010 For the third year running (see 2008, 2009) I’m going to aggregate stats in the social networking space on a single blog post, and update it through the year. Data fiends should bookmark this post for future reference. Stats are important –but on their own, they don’t tell us much Stats on social networks are important, but don’t rely on them alone. Data is like fire, it can be used for good and bad, proper insight and analysis is always required. Beyond that, you’ll often see conflicting stats across the industry as everyone has different methodologies, as a result, this listing will help you to see the greater trends –not numbers without context.

AP Chemistry Review Activities AP Chemistry Interactive Review Activities In keeping with the new framework for AP Chemistry beginning in 2013 - 2014, I am indicating here if the topic to which a review activity relates has been dropped from the curriculum. It will be identified as excluded (Excluded) to indicate that the College Board has specifically excluded it. I will leave the reviews here, however, in case some of you find them useful. These are not graded assignments. They are intended only as practice of concepts and vocabulary that are essential to your success in this course.

Social media positive for teens? Maybe! I'll admit it right at the start: When I think about teens and social media, I immediately begin to tally up the negatives. What good could possibly come from teens and tweens spending gobs of time on online networks, posting nonstop "selfies," some in rather suggestive poses, and often communicating with people they don't even know? A running joke at home: My girls, ages 6 and 7, can't get iPhones until they're 40. Systems Thinking Science for All In Washington State, our new Science Standards are based on 3 Cross Cutting Abilities (Systems, Inquiry, & Application) and 3 Domains of Science- Physical Science, Earth/Space Science, and Life Science. I have observed that Systems Thinking is not well understood and not explicitly present in most science instructional materials. This is unfortunate because a solid understanding of Systems Thinking can be a powerful teaching tool and also helps students make connections as they learn complex science concepts. The good news is that there are a lot of resources for learning about Systems. I have listed some of my favorites below: Dr.

Hype Cycle Research Methodology Interpreting Technology Hype When new technologies make bold promises, how do you discern the hype from what's commercially viable? And when will such claims pay off, if at all? Gartner Hype Cycles provide a graphic representation of the maturity and adoption of technologies and applications, and how they are potentially relevant to solving real business problems and exploiting new opportunities.

Fashion History Movies Music A list of slang words and phrases that were used during the 1940s, and their meanings. This is just icing on the cake when you consider what the decade already gave us in the form of patriotism, music, fashion, and movies. Now, a language! In no particular order: 28 Internet acronyms every parent should know It's a declarative statement: I want sex now. If it makes you feel any better, I had no clue, and neither did a number of women I asked about it. Acronyms are widely popular across the Internet, especially on social media and texting apps, because, in some cases, they offer a shorthand for communication that is meant to be instant. So "LMK" -- let me know -- and "WYCM" -- will you call me?

The National Academies Press is an association that publishes reports on a wide variety of topics. They can all be downloaded as pdf files for free, and several of them pertain to education. There really is a lot of good information there; I highly recommend checking it out. by aminge37 Jun 21