Should we eat bugs? - Emma Bryce 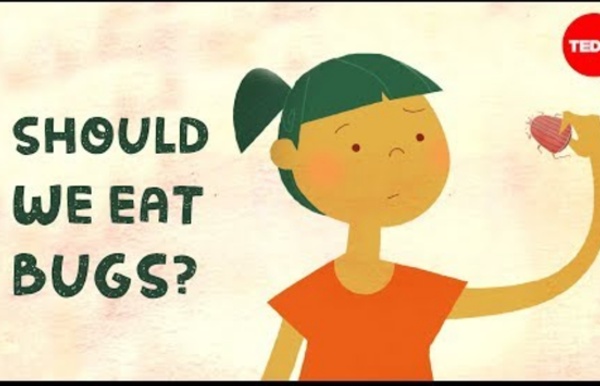 Tragic Consequences of Bullying in School Authorities say a planned massacre at a New Bedford, Mass., high school could have been another Columbine — or perhaps even worse — if police hadn't gotten wind of a group of students' alleged plot to detonate explosives, shoot classmates, and then kill themselves. The students have pleaded not guilty, but according to police reports, the five teens who allegedly planned the attack had complained of being picked on and called names. A note found by a janitor at the school spoke of "getting everyone back for calling us names and beating us with ugly sticks." The statement is reminiscent of the suicide note left by Eric Harris, one of the two attackers at Columbine High School in Littleton, Colo: "Your children who have ridiculed me, who have chosen not to accept me, who have treated me like I am not worth their time, are dead." Experts say bullying is a serious and widespread problem that can lead to school shootings and suicide.

How To: Mealworm Farm If you are looking for a way to raise your own protein cheaply, easily, and with almost no space or infrastructure, look no further than mealworms. When food is scarce, you’ll want livestock that are efficient, take up small spaces, and can easily be hidden. Protein is one of the most expensive supplements to buy, and yet it is an essential component of any omnivore’s diet, whether they are pig, poultry, canine, human, or other. We give our mealworms to all of our omnivores, including our dogs, and they all love them. The chicks and ducklings are especially crazy about them, and using them as a feed source not only ensures a very healthy growth rate, but also makes them unbelievably tame. Mealworms are even a great food for people.

10 Modern-Day Heroes Actively Changing The World Miscellaneous As children we all had our favorite superheroes. We loved them, worshipped them, pretended to be them, dressed like them and even talked like them. Now that we’re adults, we are all too well aware that heroes are in high demand but can rarely be found. The overwhelming ugliness and depravity found everywhere in the world today, has desensitized us to the point where hardly anything seems shocking or repulsive anymore. Luckily we don’t need superpowers or a cape to make a difference in the world. The Seven Best Short Films for ELT Students - Kieran Donaghy I’ve been writing lesson plans designed around short films for my website Film English for six years. Teachers often ask me how I find the short films I use in my lesson plans. The answer is quite simple: I’ve watched literally thousands of short films and developed an instinct for the type of engaging and simple short films which will work in the ELT classroom. In this article I’d like to share what for me are the seven best short films for the language classroom.

The Seven Best Film and Video Resource Sites - Kieran Donaghy As part of the launch of the website I’m organising a prize draw for my new book Film in Action. Everybody who subscribes to the website in February and March will be entered into the draw. This is the first in a series of posts in which I will look at what I think are some of the best websites, resources, books, short films, and videos for English language teachers and their students. All of the posts will be titled ‘The Seven Best …‘ Malala's Courage: Student Discussion Guide An assassination attempt was not enough to curtail the human-rights work of teenage activist Malala Yousafzai. In fact, her brush with death at the hands of the Taliban only served to strengthen her resolve and led to her recognition as a joint winner of the 2014 Nobel Peace Prize. The 17-year-old Pakistani rose to prominence as a vocal advocate for girls’ right to education. The Taliban, which ardently disagrees with Yousafzai’s position, was fearful that her activism would inspire others to act. The group planned to silence the teen, and while she rode a school bus, a Taliban gunman shot her in the head.

He Named Me Malala Malala: There is a moment when you have to choose whether to be silent or to stand up. Presenters: Tonight Malala remains in intensive care. She was shot in the head for daring to suggest girls should go to school. Malala’s father: Me and my wife, we cried all the night. The doctors told me, she will survive but she may not be the same as she was. Malala: They shot me on the left side of my head. Nelson Mandela: Champion of Freedom Video - Nelson Mandela You're almost done! You will soon receive an activation email. Once you click on the link, you will be added to our list. Movies, TV & Videos NB: There are copyright restrictions on the use of TV/radio programmes and movies for educational purposes. Teachers are responsible to checking that their institution has an appropriate screenrights licence. See www.screenrights.org for more information. ESLMovies.com – includes resources for Rabbit Proof Fence, The Castle, Whale Rider, Finding Nemo, Looking for Alibrandi, and more. Cheap and available to download, and in different levels for different movies.Metro Magazine – a good one for studying movies & their Study Guides are highly recommendedAustralian Screen – over a thousand video clip extracts from Australian films & TV programs with teachers’ notes and transcripts – highly recommended.NFSA Films YouTube channel – National Film & Sound ArchiveUsing film texts to teach about the English Language – from ACMI, this resource offers suggestions for using film to introduce students to the different varieties of Australian English.

TED Weekends asks: What if your life were to end today … On January 17, 2009, at 3:24pm, Flight 1549 took off from New York’s LaGuardia Airport as normal. Five minutes later, it had crash-landed in the Hudson River. While the heroic landing of Captain Chesley “Sully” Sullenberger has become the stuff of aviation legend, during the white-knuckle landing his passengers had no idea whether they would survive or die on impact. Ric Elias was sitting in the first row of the plane, and at TED2011 he shared for the first time the thoughts that went through his mind in those minutes — both the terrifying and mundane — and how the event changed his life forever.

VOA TV – Hero Pilot Now Turns to Stopping a Descent in New Pilots Pilot Chesley Sullenberger is known for his heroic actions in early 2009. He acted when his airplane struck birds and both engines failed just after it left an airport in New York. AIR CONTROLLER: “Okay, which runway would you like at Teterboro?” FLIGHT 1549: “We’re gonna be in the Hudson.” Sullenberger decided where and how to land his US Airways plane.