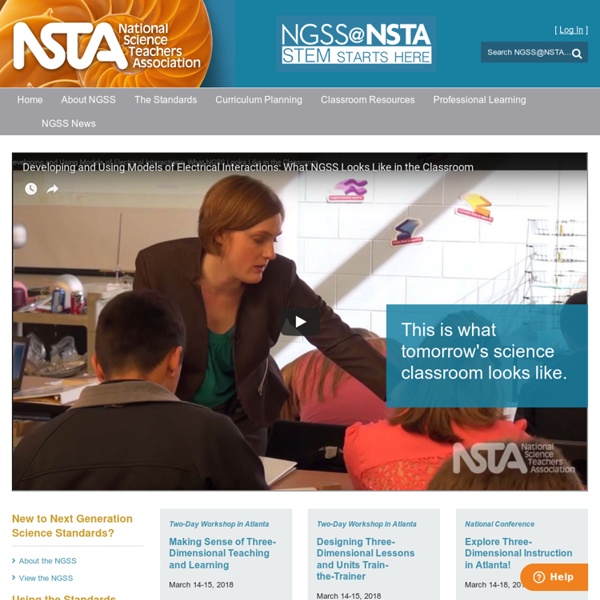 This is your central source for resources, tools, and support to help you explore, learn, and implement the Next Generation Science Standards. NSTA is dedicated to helping science teachers make an important shift in science education, and we’ve assembled an amazing volume of resources and learning tools with much more to come! Now Available: User-friendly access to the standards Coming Soon: Advanced searchesSave functions to create custom viewsNSTA-vetted resources to support the teaching and learning of individual standards and performance expectationsPopular crowd-sourced materials and resources by science educators

New Jersey State Academic Standards: Science New Jersey Core Curriculum Content Standards Science Michael Heinz, Coordinator Science, engineering, and technology influence and permeate every aspect of modern life. Investigation Roadmaps - Motion Introduction STC Motion and Design is a 15-lesson kit intended for students in grade 5. It introduces students to the physics of motion and the importance of technological design. More… Did you solve it? Are you smarter than a Hong Kong six-year-old? I hope you enjoyed solving today’s odd-one-out problem, because it was meant to be funny, as well as fun. Puzzle maven Tanya Khovanova, who devised it, intended it to be taken that way. Tanya - like many of you who posted comments - does not like odd-one-out puzzles. Let’s see why with another puzzle. Which animal is the odd one one out? PigCowHen Sheep

Draft of Common Science Standards Draws Friendly Fire - Curriculum Matters The first public draft of common science standards is encountering some criticism from a prominent teachers' organization and a Washington-based think tank, with the former complaining of a "lack of clarity and coherence" in the performance expectations, and the latter saying the draft serves up an overdose on scientific "practices" while omitting some key content knowledge that it argues needs to be explicitly included. In both instances, the feedback is essentially a "critical friend" approach, as the National Science Teachers Association is a partner involved in the development of the standards (and as such, has been privy to earlier, private drafts), and the Thomas B. Fordham Institute is a strong advocate for producing common science standards. "The quest for fewer standards has led to overcompression, overgeneralization, and omission," write Fordham's set of seven expert reviewers, led by Paul Gross, a professor emeritus of life sciences at the University of Virginia.

Virtual Design Center Inquiry Support Tools One of the important aspects of inquiry-based learning is the process of performing investigations. Edelson, Gordin, and Pea (1999) suggested that one of the important principles to successfully implement inquiry-based learning with technology is to create support for inquiry processes. Some learning technologies specifically provide structure for learners’ inquiry process, which teachers and learners can use for any investigation topic. Inquiry support tools not only facilitate learners’ current investigation process, but also nurture metacognitive ability to monitor their own inquiry process (Self-regulated Learning). The Challenges and Realities of Inquiry-Based Learning Inquiry Learning Teaching Strategies Getty By Thom Markham Teachers in a rural southeast Michigan high school were recently discussing the odd behavior of the senior class. It seems the 12th graders were acting more civilly toward the junior class in the hallways. The prom was also quieter and more well-mannered than in previous years.

50 Digital Sources Of Free STEM Education Colleges, online universities, and other educational forums in your community can be excellent places to learn more about a variety of STEM topics, but there is also a wealth of educational material available on the web for those who prefer to learn at their own pace or take a more individual approach. Even better, these resources, whether classes, lectures, or tutorials, are all free of charge, meaning you can improve your knowledge without emptying your wallet. Check out our list (organized by topic, not ranking) for some great STEM resources that can help you build your knowledge about everything from calculus to zoology. Universities These universities, many of which are renowned for their STEM programs, offer resources like course materials, videos, and lecture series. Lectures

Papahānaumokuākea Marine National Monument Contact Us The Papahānaumokuākea Marine National Monument main office has relocated to historic Ford Island on O‘ahu. NOAA/Daniel K. Inouye Regional Center NOS/ONMS/PMNM 1845 Wasp Blvd, Building 176 Honolulu, HI 96818 Phone: 808-725-5800 Fax: 808-455-3093 Email: hawaiireef@noaa.gov Click here to learn more about the Daniel K. A life worth Achieving, Inc The process of science has not changed much the past few hundred years. It's messy, always has been. Our worldviews, the concrete ideas we carry around in our heads about what's real, are no more solid than the mass of goo we hold in our skulls. Web-based Inquiry Science Environment (WISE) Java UpdateJan 15, 2014 On January 14, 2014, a new version of Java was released. Please update your computer to this version to continue using simulations and probes in WISE. Click here to download the latest java. WISE Image AnnotatorFeb 27, 2013 Check out the new WISE image annotator.

What Inquiry is NOT "Science class should make students think: Our students aren't being allowed to discover the joys of experimenting, and learning on their own." hits the nail on the head, and is the reason I'm such a huge supporter of students conducting their own independent research projects. (See STEM Student Research Handbook.) Ironically enough however, if I had read this article while I was still a full-time classroom teacher, I would have defended myself saying that I worked tirelessly to help students enjoy science. Web-based Inquiry Science Environment (WISE) Java UpdateJan 15, 2014 On January 14, 2014, a new version of Java was released. Please update your computer to this version to continue using simulations and probes in WISE. Click here to download the latest java. WISE Image AnnotatorFeb 27, 2013