To Give Your Employees Meaning, Start With Mission - Teresa Amabile and Steve Kramer 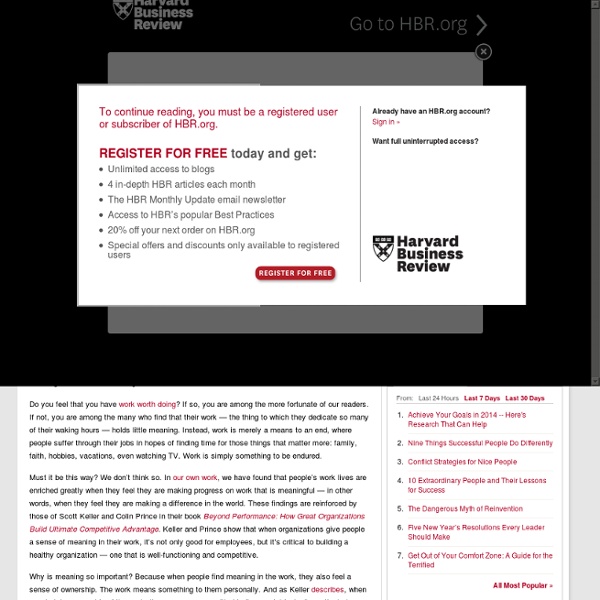 by Teresa Amabile and Steve Kramer | 11:00 AM December 19, 2012 It is impossible to have a great life unless it is a meaningful life. And it is very difficult to have a meaningful life without meaningful work. -Jim Collins Do you feel that you have work worth doing? Must it be this way? Why is meaning so important? Unfortunately, too many companies don’t even try to make work meaningful for the people doing it. The Company’s primary objective is to maximize long-term stockholder value, while adhering to the laws of the jurisdictions in which it operates and at all times observing the highest ethical standards.Dean Foods Company Mike Brenner and Steve Van Valin, of the consulting firm Culturology, talk about sources of “meaning amplification” that managers can tap in their quest to sustain employee engagement. To accomplish this, leaders have two tasks. Our mission: to inspire and nurture the human spirit — one person, one cup and one neighborhood at a time.Starbucks Coffee Related:  Motivation

Keep Me Company Michael has published a post called “Curious Company” the other day. I swirled with reactions as I read it. Whereas it was mostly delight, I’d like to apply a bit different focus to the subject. Let’s see. The common concept about businesses and corporations is that they should have a goal. TargetProcess as a company has the goal to develop the best project management tool in the world for small to medium companies. I want to put an emphasis on some other, more important things. It might sound weird and totally groundbreaking, but the new paradigm for companies and corporations is not the “correct goal-setting”, whatever this is, but the optimal experience. It’s about enjoyment. Recently I talked to one of my former associates. What he said is, unfortunately, the mainstream belief for many more people than we can imagine. I wanted to explain so many things to him. Again, it might be that some people don’t have this ability to create. Friends, keep me company. Olga Kouzina,

Favorites of 2012: On being wrong about business talks Business talks are boring. Among all the things I was certain of when I started writing for TED, that one was near the top of the list, just under ‘ice is cold’ and ‘brains are gooey.’ I worked as a physicist for a few years before switching over to writing (with a short jaunt in between in comedy), so just never cared much for business. At TED, I was hired to write about the science talks, and it was wonderful. As I watched more talks, though, one theme started to emerge that I fell in love with — the idea of being wrong. I loved Rowe’s talk, partly because it’s a riveting story, but also because the feeling of being wrong –which he describes perfectly – is so central to science. And then, at TEDGlobal this year, I saw the talk at the top of this post, by Margaret Heffernan. Now, the second half of Heffernan’s talk should have been boring to me, because Heffernan used that story to talk about how businesses do — or at least should — operate.

Create positive pressure around releases If you’re working towards a key release, the pressure mounts for everyone involved as it approaches. For the technical team responsible for delivery the rising pressure in this situation is nearly always negative if left unchecked. As time runs out the drumbeat gets faster and faster as the team is whipped up to ramming speed, a bit like the galley slaves in Ben Hur. This type of pressure creates a negative spiral. Rather than stress the team out about getting everything done in time, there’s an opportunity for the customer to create positive pressure within the team.

The #1 Career Mistake Capable People Make The Myth of Passion and Motivation: How to Stay Focused When You Get Bored Working Toward Your Goals 4.1K Flares Filament.io Made with Flare More Info'> 4.1K Flares × We all have goals and dreams, but it can be difficult to stick with them. Each week, I hear from people who say things like, “I start with good intentions, but I can’t seem to maintain my consistency for a long period of time.” Or, they will say, “I struggle with mental endurance. Don’t worry. For example, I’ll start one project, work on it for a little bit, then lose focus and try something else. Maybe you have felt this way too. This problem reminds me of a lesson I learned while working out one day… The Myth of Passion and Motivation On this particular day in the gym, there was a coach visiting who had worked with thousands of athletes over his long career, including some nationally-ranked athletes and Olympians. I had just finished my workout when I asked him, “What’s the difference between the best athletes and everyone else. He briefly mentioned the things that you might expect. Working When Work Isn’t Easy In other words…

The Philosophy of Motivation Peter Drucker, the legendary management theorist, told us that we have to “accept the fact that we have to treat almost anybody as a volunteer.” In other words, we can’t just order people around and expect them to do what we want, we have to get them to want what we want. An entire industry of compensation consultants has emerged to answer that question, but nevertheless most employees feel unmotivated. Why is that? We need to drastically change how we think about incentives. For years, compensation specialists have focused on rational benefits to employment, with poor results. A Failed Rational Model Traditionally, employment has been viewed economically. However, it should be clear that there is something wrong with that notion. When motivated people wake up in the morning, they don’t think, “I have to send this e-mail, so that I can earn a certain amount towards my rent, a fraction of my vacation time and a sliver of my health benefits. The Importance of Dignity In his book Drive - Greg

The science behind what motivates us to get up for work every day 2.6K Flares Filament.io 2.6K Flares × The following post is a guestpost by Walter Chen, founder of a unique new project management tool IDoneThis. More about Walter at the bottom of the post. So, here is the thing right at the start: I’ve always been uncomfortable with the traditional ideal of the professional — cool, collected, and capable, checking off tasks left and right, all numbers and results and making it happen, please, with not a hair out of place. I admit that I’ve never been able to work that way. Feelings provide important feedback during our workday. What does emotion have to do with our work? It turns out, quite a lot. Psychologists Teresa Amabile and Steven Kramer interviewed over 600 managers and found a shocking result. 95 percent of managers misunderstood what motivates employees. “The larger the monetary reward, the poorer the performance. – money doesn’t motivate us, at all, instead emotions do.” In the famous expriment by Dr. Amabile and Kramer tell us this: