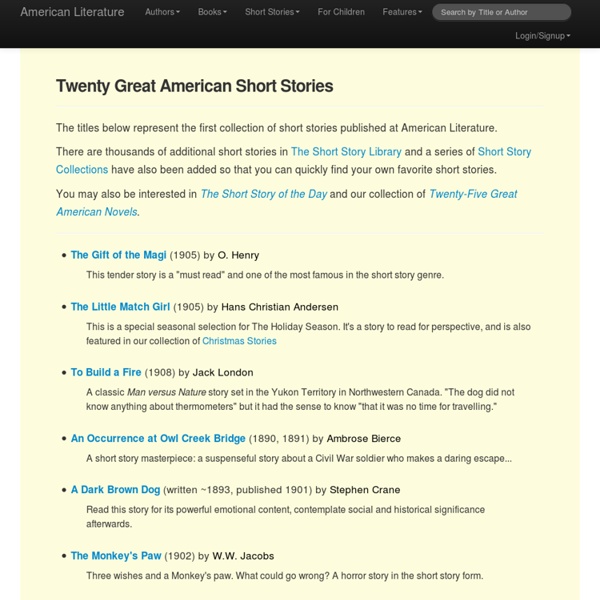 The Gift Of The Magi by O Henry One dollar and eighty-seven cents. That was all. And sixty cents of it was in pennies. Pennies saved one and two at a time by bulldozing the grocer and the vegetable man and the butcher until one's cheeks burned with the silent imputation of parsimony that such close dealing implied. There was clearly nothing to do but flop down on the shabby little couch and howl. While the mistress of the home is gradually subsiding from the first stage to the second, take a look at the home. In the vestibule below was a letter-box into which no letter would go, and an electric button from which no mortal finger could coax a ring. The "Dillingham" had been flung to the breeze during a former period of prosperity when its possessor was being paid $30 per week. Della finished her cry and attended to her cheeks with the powder rag. There was a pier-glass between the windows of the room. Suddenly she whirled from the window and stood before the glass. Where she stopped the sign read: "Mne.

The Daniel Fast “In those days I, Daniel, was mourning three full weeks. I ate no pleasant food, no meat or wine came into my mouth, nor did I anoint myself at all, till three whole weeks were fulfilled.” Daniel 10:2, 3 One of the great things about the Daniel Fast is that you are not limited to any specific amount of food, but rather to the kinds of food you can eat. The Daniel Fast is limited to vegetables (includes fruits) and water. If you want a print out of this list in brochure form to use yourself or share with others, please visit www.Daniel-Fast.com The Daniel Fast – available at all local and online bookstores. Special Note: if you have health issues, please be sure to contact your health professional for advice before committing to any fast including the Daniel Fast. After answering hundreds of questions about the Daniel Fast, I am updating the food guidelines. Please make sure to READ THE LABEL when purchasing packaged, canned or bottled foods. All fruits. All vegetables. All legumes.

To Build a Fire, by Jack London DAY HAD BROKEN cold and gray, exceedingly cold and gray, when the man turned aside from the main Yukon trail and climbed the high earth-bank, where a dim and little-travelled trail led eastward through the fat spruce timberland. It was a steep bank, and he paused for breath at the top, excusing the act to himself by looking at his watch. It was nine o'clock. “The Yukon lay a mile wide and hidden under three feet of ice.” The man flung a look back along the way he had come. But all this—the mysterious, far-reaching hair-line trail, the absence of sun from the sky, the tremendous cold, and the strangeness and weirdness of it all—made no impression on the man. As he turned to go on, he spat speculatively. He plunged in among the big spruce trees. “At the man's heels trotted a dog, a big native husky, the proper wolf-dog,...” He held on through the level stretch of woods for several miles, crossed a wide flat of niggerheads, and dropped down a bank to the frozen bed of a small stream.

The Necklace by Guy de Maupassant The Necklace She was one of those pretty and charming girls born, as though fate had blundered over her, into a family of artisans. She had no marriage portion, no expectations, no means of getting known, understood, loved, and wedded by a man of wealth and distinction; and she let herself be married off to a little clerk in the Ministry of Education. Her tastes were simple because she had never been able to afford any other, but she was as unhappy as though she had married beneath her; for women have no caste or class, their beauty, grace, and charm serving them for birth or family, their natural delicacy, their instinctive elegance, their nimbleness of wit, are their only mark of rank, and put the slum girl on a level with the highest lady in the land. She suffered endlessly, feeling herself born for every delicacy and luxury. She had no clothes, no jewels, nothing. One evening her husband came home with an exultant air, holding a large envelope in his hand. "Nothing. "That's true.

Fiction: Symbols and Signs For the fourth time in as many years, they were confronted with the problem of what birthday present to take to a young man who was incurably deranged in his mind. Desires he had none. Man-made objects were to him either hives of evil, vibrant with a malignant activity that he alone could perceive, or gross comforts for which no use could be found in his abstract world. At the time of his birth, they had already been married for a long time; a score of years had elapsed, and now they were quite old. That Friday, their son’s birthday, everything went wrong. Outside the building, she waited for her husband to open his umbrella and then took his arm. During the long ride to the subway station, she and her husband did not exchange a word, and every time she glanced at his old hands, clasped and twitching upon the handle of his umbrella, and saw their swollen veins and brown-spotted skin, she felt the mounting pressure of tears. “I can’t sleep!” “Why can’t you sleep?” “Is it your stomach?