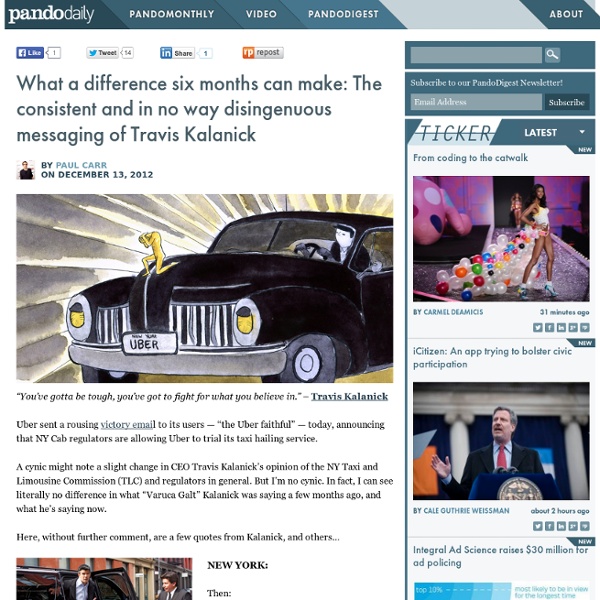 By Paul Carr On December 13, 2012 “You’ve gotta be tough, you’ve got to fight for what you believe in.” – Travis Kalanick Uber sent a rousing victory email to its users — “the Uber faithful” — today, announcing that NY Cab regulators are allowing Uber to trial its taxi hailing service. A cynic might note a slight change in CEO Travis Kalanick’s opinion of the NY Taxi and Limousine Commission (TLC) and regulators in general. But I’m no cynic. In fact, I can see literally no difference in what “Varuca Galt” Kalanick was saying a few months ago, and what he’s saying now. Here, without further comment, are a few quotes from Kalanick, and others… Then: “We did the best we could to get more yellows on the road but New York’s TLC (Taxi and Limousine Commission) put up obstacles and roadblocks in order to squash the effort around e-hail, which they privately have said is legal under the rules. Now: “Why would you so clearly put a special interest ahead of the interests of those who elected you?

Social Mention 30 Useful (and Unknown) Web Apps You Need to Bookmark - Page 2 FillAnyPDF FillAnyPDF is a fairly simple web app which allows you to upload a PDF file, then easily write on it wherever you want. This allows you to easily fill out any form, even if they’re not in an editable PDF form. You can also share your blank form with others, so you can collect forms from a group easily. FillAnyPDF also supports electronic signatures and has a repository of free forms. Google Wave “What is Google Wave?” That was the question a lot of people asked when Google launched its email-replacement-slash-collaboration platform Wave, and to a large extent, the question remains unanswered. SpeedTest Everyone wonders sometimes why their ISP’s claim of Blazing Fast Internet doesn’t seem to translate to faster downloads or lower pings. Grooveshark What makes Grooveshark special enough that we recommend it over the dozens of other music streaming web apps? Vuvox Vuvox is a rich media creation app that allows you to quickly turn your photos and audio into a moving web collage.

BO.LT | A more interesting way to share PHRAS.IN - Say this or say that? keybr.com - Take typing speed test and practice typing online BitLet - the BitTorrent Applet In the summer of 2007, shortly after launching Novlet, Daniele and I still had time to spare and were looking for something new to build. Sure enough, within a short period, Daniele came up with the idea that would soon become BitLet: a BitTorrent client that could run in a browser without requiring users to install anything on their computer. Back then, browsers had very limited capabilities: AJAX had been recently introduced (in 2005), web applications were moving from static pages to dynamic client UIs but no browser could do things like opening sockets and writing files locally, central requirements for a peer to peer file sharing application. We found a solution in an unlikely piece of technology: Java applets. Despite Java’s success as a programming language, applets had never been that popular among casual users. While a good idea in principle (small applications that could be downloaded and launched from web pages), the concept never got traction beyond a few niches.

Kongregate: Play free games online WordPress Plus - ManageFlitter - Twitter Account Management Would you like your public Google+ Plus posts to automatically appear on Twitter? Join 59,178 other Google+ accounts, currently using ManageFlitter to send their Google+ posts to Twitter. Frequently Asked Questions How quickly are my Google+ updates automatically tweeted out? Pro and Business accounts are refreshed every few minutes, so new Google+ posts will be Tweeted with a minimal delay.