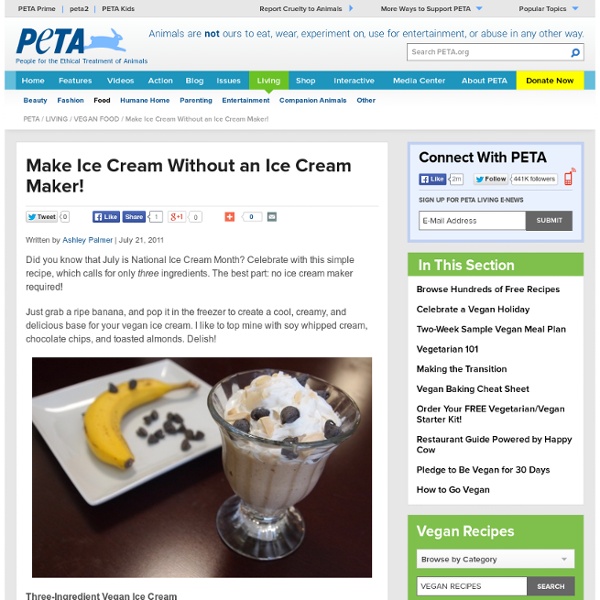 Did you know that July is National Ice Cream Month? Celebrate with this simple recipe, which calls for only three ingredients. The best part: no ice cream maker required! Just grab a ripe banana, and pop it in the freezer to create a cool, creamy, and delicious base for your vegan ice cream. I like to top mine with soy whipped cream, chocolate chips, and toasted almonds. Three-Ingredient Vegan Ice Cream 1 banana, peeled and frozen 1 Tbsp. peanut butter 1 tsp. cocoa powder Additional flavorings (optional) Combine all ingredients in a food processor or blender and mix until well combined and creamy.If desired, add additional flavors or toppings, such as cookies, fresh fruit, shredded coconut, cinnamon, or pieces of candy.Serve immediately. Makes 1 serving Related:  ice cream vegan

Universal Healing Tao Center Complete Guide Urine Therapy Complete Guide Urine Therapy (Coen Van Der Kroon) Urine consists of 95% of water, 2.5% of urea and the remaining 2.5% is a mixture of minerals, salts, hormones and enzymes. Only urea , the substance after which urine is named, can be poisonous when present in the blood. However, this is irrelevant in the practice of drinking urine, as urine is not immediately put back in the bloodstream. In small amounts urea gets back into the body, it is purifying, and clears up excess mucus. One of the liver's most important functions is detoxification of the blood. The kidney's most important function consists of balancing out all elements in the blood. Human urine has strengthening and curative characteristics concerning many deficiencies. Drinking urine is a good alternative wherever water is scarce. Urine therapy consists of two parts: internal appication (drinking urine) and external application (massaging with urine). Another method, which I myself used, is to begin by fasting for a few days.

Giant Reeses Peanut Butter Cup I found Pimp That Snack last year and spent some time enjoying the pimps. Being inspired myself, I made a giant Reese's Peanut butter cup as a dessert for Thanksgiving 2006. I failed to document it, so this year I planned to repeat the process, with pictures. Looking at the other Reese's pimps, I found that most of them just used regular peanut butter when in fact the inside of a true cup was not peanut butter of the make-a-sandwich variety. I did some research on the net and found several good candidates for recipes, mostly from Buckeyes (chocolate dipped peanut butter balls). After a couple of experiments, which my friends enjoyed critiquing ("too runny," "pretty good," "does the burning stop?") Ingredients: Aluminum casserole pan $1.49 or use whatever seems right for you (it had the right shape). Total if you bought all items new: $19.91 Total for ingredients used: $ 9.33 You start by preparing the pan for the chocolate. The next night, I started with the bottom layer. Rate this pimp!

Dairy Free Chocolate Ice-Cream Recipes» Dairy Free Chocolate Ice-Cream We all want to be a little healthier. Let's be honest, you can't live on Slutty Brownies (and the world is a sadder place for it). However, the idea of snuggling down infront of a movie with a big bowl of celery sticks is deeply depressing. So, I give you, guilt free, fat free, dairy free ice cream! I like it soft, like Mr Whippy so I can eat it with a spoon, but you could easily freeze it a little longer and serve as scoops in crunchy waffle cones. You can make any flavour you like, I particularly like chocolate-maple, but I hear chocolate-peanut butter is fantastic! The magic ingredient is...... Pile them onto a plate and pop them in the freezer. Leave them for about 5hours, or over night if possible. Turn it on, baby! Keep blending until you have a smooth mush, like the one bellow. Now add 2-3 heaped teaspoons of cocoa powder and a swirl of maple syrup (Or whatever flavourings you fancy, be inventive!) There you have it!

Shepherds Pie Soup Finally I can give my mouth and stomach a break from all that spicy food last week! It's soup Monday yet again, and this week I have a nice and easy one for you guys. This was the most comforting soup I've had in awhile. I mean, what's not to like in this big bowl of potato, beef, corn, peas, and carrots? I believe it is supposed to be raining this afternoon here in Massachusetts, and I think this soup will be just the thing to help you through that rainy Monday funk. Potatoes and stock in a nice big pot. Meanwhile, brown the beef. After the beef, do the onion and carrot. When the potatoes are tender, process until smooth. Final veggies go right in. The perfect consistency. I love this soup. Make this tonight! 5 lb bag of potatoes, minus one large potato 2 boxes of chicken stock 1 lb ground beef 2 cups frozen corn 1 cup frozen peas 1 large onion 2 or 3 carrots half cup of grated cheese Chop the potatoes and put them into a pot with the stock.

Guest Post: Blueberry Lavender Vanilla Ice Cream – Vegan, Gluten-free, Refined Sugar-free Today’s recipe comes from the lovely Beth Manos Brickey of the blog Tasty Yummies! Read on for a mouth-watering and refreshing summer recipe that can be used to make ice cream or popsicles! WAIT….before you pass by this recipe without a second glance, because you don’t have an ice cream maker, know that this ice cream can easily be made into delicious homemade Blueberry Lavender Vanilla Pops using one of those handy dandy popsicle molds that you can grab for a few dollars almost anywhere! Instead of adding the chilled mixture to an ice cream maker, just pour it into a popsicle mold and freeze until they are solid. OK, now we can talk about all of the deliciousness of this ice cream! Ingredients: Directions: In a large sauce pan over medium-heat, add blueberries, maple syrup and 1 cup water, bring to the start of a boil then drop the heat down and allow it to simmer for about 5-8 minutes. Add the coconut milk and lavender to the pan with the blueberry syrup.

Popsicles! Not to sound full of myself, but I’m pretty sure this is the be all, end all of popsicle roundups. There’s a little something for everyone: the foodies, the purists, the ones who prefer frozen yogurt, the ones who prefer a little alcohol, everyone. Tweny-five options to be exact. The post I did last summer on the cold guys was one of DC’s most viewed ever, so I thought you’d all be up for another round – was I right? Click on the photo to be taken to the recipe. All photos and recipes copyright of their respective source unless otherwise noted.

ETYMOLOGY AND CIPHERING Etymology and Ciphering is a group that has a direct focus on determining the true meaning of words and symbols. Our primary emphasis is to identify ancient and modern programming of the Mind, Body, and Soul. This we feel will allow us to gain a greater innerstanding and bearing in relation to the multiple realities that surround us, seen and unseen. Tools The Anagram Engine This tool will allow you to see all the posible spelling for a group of words. Symbols.com An online site that allows you to track a symbol by description. Sepher Sapphires Book - Audio This work will allow you to gain a great example of just how expansive the meaning and use of languages can be by highlighting the Hebrew Cabalah. The Esoteric Alphabet Book A look in to the English languages and the energy it evokes through shape. The Book of Talismans, Amulets, and Zodiacal Gems Book A masterpiece that highlights ancient work that is being lost and the true origins of many Sigils used today.

Carrot Cake Ice Cream [Vegan] By Lauren Zembron, on August 12th, 2010 Yes, I admit I have a slight obsession with all things carrot cake-inspired. Case in point: Therefore, it goes without saying that the recipe for Carrot Cake Ice Cream in Wheeler Del Toro’s The Vegan Scoop caught my eye. Like many home cooks and food bloggers, I rarely follow another’s recipe to a “t”, and this ice cream was no exception. So, how does this recipe differ from the original? The alternations I made suited my tastes perfectly! This ice cream recipe is going straight into my cooking binder, which I fill only with recipes I know I will make over and over again. I think I need to get back into the kitchen. Carrot Cake Ice Cream [Vegan] adapted from The Vegan Scoop Ingredients: Directions: Combine brown sugar, maple syrup, and margarine in a small saucepan over medium heat; stir until melted. *This post is an entry for Chocolate Covered Katie’s “Hug a Vegan Dessert” feature. Other recipes to check out:

Oreo and Peanut Butter Brownie Cakes So, after being gone all last week, this has been catch up on the house week. Mostly laundry actually. Man, who knew that a weeks worth of laundry from 5 people could be so daunting. Yikes!! But I am kind of behind on my cooking and baking as well since I've been gone and cleaning. Oreo and Peanut Butter Brownie Cakes 1 box brownie mix, 8x8 inch size 24 Oreo Cookies 1/2 cup creamy peanut butter Preheat oven to 350 degrees and line a 12 muffin cup baker with paper liners. Prepare brownie mix according to package directions. Makes 12 servings Recipe from picky-palate.com foodsnots.com

Oreo Cookies-Recipe Oreo-Oreo Recipes-Cheese Cupcakes-Oreo Cheesecakes Posted by Grace Massa Langlois on Wednesday, 21st July 2010 I have yet to meet a person who doesn’t like Oreo cookies or Cream Cheesecake Cupcakes. Who could resist cream-filled chocolate sandwich cookies? Not Me! Especially the double-stuffed Oreo cookie, it’s one of the best cookies for dunking into a cold glass of milk. I went out yesterday to do my weekly shop, came home, and before I was able to bring in the first grocery bag Matt was hunting for the cookies and cream ice cream. One of Matt’s favourite desserts of all time is cherry cheesecake and I thought to myself why not Oreo Cookies and Cream Cheesecakes, that should satisfy his craving. Plus these cheesecakes are super easy to prepare, everything comes together in one bowl and there’s no crushing chocolate wafers with a rolling pin, then melting butter, baking the crust first and then baking a second time when filled. Drop an Oreo cookie into each muffin tin, make filling, add chopped cookies, bake, and enjoy, how easy is that?