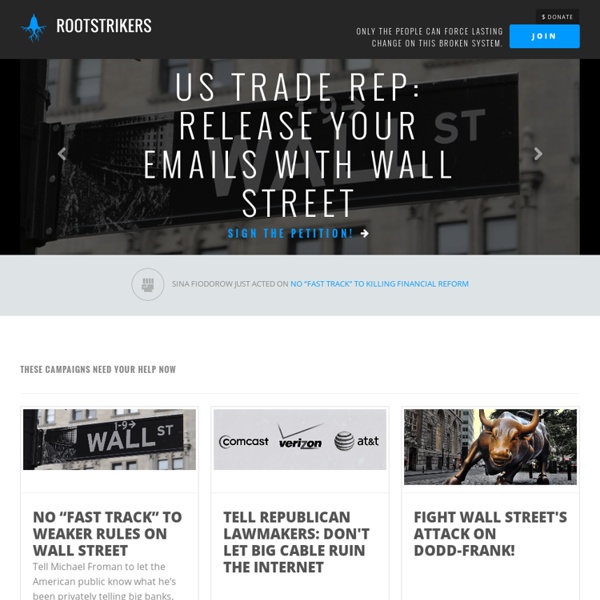 Glenn Greenwald: With Liberty and Justice for Some As multiple episodes demonstrate, a belief that elite immunity is both necessary and justified became the prevailing ethos in the nation’s most influential circles. In countless instances over recent years, prominent political and media figures have insisted that serious crimes by the most powerful should be overlooked— either in the name of the common good, or in the name of a warped conception of fairness according to which those with the greatest power are the most entitled to deference and understanding. This is what makes the contemporary form of American lawlessness new and unprecedented. It is now perfectly common, and perfectly acceptable, to openly advocate elite immunity. And this advocacy has had its intended effect: the United States has become a nation that does not apply the rule of law to its elite class, which is another way of saying that the United States does not apply the rule of law. . . . is an American tragedy in which we all have played a part.

The enemy is the state: how the US justice system started a civil war The images are compelling, true, but they don’t compel due to any great variety. On the contrary, the experienced viewer will detect a certain dispiriting sameness almost from the outset. The only aspect that truly changes is the accompanying data, though this is mostly irrelevant detail. Crowdsourcing vs Putin: “Mapping Dots is a Disease on the Map of Russia” I chose to focus my dissertation research on the impact of information and communication technologies (ICTs) during elections in repressive states. Why? Because the contentious relationship between state and society during elections is accentuated and the stakes are generally higher than periods in-between elections. To be sure, elections provide momentary opportunities for democratic change. Moreover, the impact of ICTs on competitive events such as contentious elections may be more observable than the impact on state-society relations during the regular calendar year. In other words, the use of ICTs during election periods may shed some light on whether said technologies empower coercive regimes at the expense of civil society or vice versa.

Glenn Greenwald: Too Big to Jail (Book Excerpt) In July 2010, Martin Joel Erzinger, a hedge fund manager for extremely wealthy investors at Morgan Stanley Smith Barney, was driving his car near Vail, Colorado, when he hit a bicyclist from behind and then sped away. The Vail Daily reported that the victim, Steven Milo, suffered "spinal cord injuries, bleeding from his brain and damage to his knee and scapula," which left him facing multiple surgeries. The newspaper's account of the incident makes clear that Erzinger should have been prosecuted for this incident. Milo was bicycling eastbound on Highway 6 just east of Miller Ranch Road, when Erzinger allegedly hit him with the black 2010 Mercedes Benz sedan he was driving. Erzinger fled the scene and was arrested later, police say. Erzinger allegedly veered onto the side of the road and hit Milo from behind.

Big Daddy Is Watching - 6 Ways In Which You Are Monitored Everyday “You are being watched. The government has a secret system, a machine that spies on you every hour of every day. I designed the machine to detect acts of terror but it sees everything….”. Anyone who is a fan of the TV series Person of Interest will recognize that line as the beginning of the programme’s monologue. But is it just made-up television entertainment, or is it actually real? Are you really being spied on every hour of every day?

Open-source governance Open-source governance is a political philosophy which advocates the application of the philosophies of the open source and open content movements to democratic principles in order to enable any interested citizen to add to the creation of policy, as with a wiki document. Legislation is democratically opened to the general citizenry, employing their collective wisdom to benefit the decision-making process and improve democracy.[1] Theories on how to constrain, limit or enable this participation vary however as much as any other political philosophy or ideology. Accordingly there is no one dominant theory of how to go about authoring legislation with this approach. There are a wide array of projects and movements which are working on building open-source governance systems.[2] Applications of the principles[edit]

How the Rich Subverted the Legal System and Occupy Wall Street Swept the Land This article originally appeared at TomDispatch.com. To stay on top of important articles like these, sign up to receive the latest updates from TomDispatch.com. As intense protests spawned by Occupy Wall Street continue to grow, it is worth asking: Why now? The answer is not obvious. Sunday Times Snowden Story is Journalism at its Worst (updated below) Western journalists claim that the big lesson they learned from their key role in selling the Iraq War to the public is that it’s hideous, corrupt and often dangerous journalism to give anonymity to government officials to let them propagandize the public, then uncritically accept those anonymously voiced claims as Truth. But they’ve learned no such lesson. That tactic continues to be the staple of how major U.S. and British media outlets “report,” especially in the national security area. And journalists who read such reports continue to treat self-serving decrees by unnamed, unseen officials — laundered through their media — as gospel, no matter how dubious are the claims or factually false is the reporting.

Open Source Life: How the open movement will change everything Consider this: in just a few short years, the open-source encyclopedia Wikipedia has made closed-source encyclopedias obsolete — both the hard-bound kind and the CD-ROM or commercial online kind. Goodbye World Book and Brittanica. Sure, these companies still exist, but their customer base is rapidly shrinking as more and more people would rather go with Wikipedia — it’s free, it’s easy to use, and it’s much, much more up-to-date.

Meritocracy Definitions[edit] Early definitions[edit] Supporters of meritocracies do not necessarily agree on the nature of "merit", however, they do tend to agree that "merit" itself should be a primary consideration during evaluation. Ryan Gallagher on the Sunday Times "article" on leaked documents The Sunday Times has a front page story out today claiming that the Chinese and Russian governments have somehow managed to obtain National Security Agency whistleblower Edward Snowden's trove of documents. The story is sourced from anonymous UK government officials who make a series of significant allegations, unfortunately backed up with zero evidence. It's worth going through some of the key points of the story to cast some critical scrutiny on the central claims and to raise a few questions about them: 1) "RUSSIA and China have cracked the top-secret cache of files stolen by the fugitive US whistleblower Edward Snowden...according to senior officials in Downing Street, the Home Office and the security services."

Government Are we on the cusp of seeing dramatic changes in the way governments operate by publishing and consuming open data? Mark Headd, Developer Evangelism at Accela seems to think so. Earlier this year, Croatian political party ORaH published a new policy that relies heavily on open source solutions, addresses the dangers off vendor lock-in, and insists on open document standards. Best of all, they did it the open source way. The Open Election Data Initiative wants to give access to election data for a true picture of an election process, including how candidates are certified, how and which voters are registered, what happens on election day, whether results are accurate, and how complaints are resolved. The Government of India (GOI) has adopted a comprehensive and supportive open source policy.

GAO Finds Serious Conflicts at the Fed WASHINGTON, Oct. 19 - A new audit of the Federal Reserve released today detailed widespread conflicts of interest involving directors of its regional banks. The GAO detailed instance after instance of top executives of corporations and financial institutions using their influence as Federal Reserve directors to financially benefit their firms, and, in at least one instance, themselves. "Clearly it is unacceptable for so few people to wield so much unchecked power," Sanders said. "Not only do they run the banks, they run the institutions that regulate the banks." Sanders said he will work with leading economists to develop legislation to restructure the Fed and bar the banking industry from picking Fed directors. "This is exactly the kind of outrageous behavior by the big banks and Wall Street that is infuriating so many Americans," Sanders said.

The Baltic Institute of Finland - eCitizen II The Baltic Institute of Finland led the Interreg IVC financed project - eCitizen II – Towards citizen-centered eGovernment in European cities and regions -which was launched in the beginning of January 2010 and ended in December 2013. The cooperation was designed to support European cities and regions in their joint efforts to accelerate eGovernment through exploiting established networks, gained experiences and good practices to improve interaction between citizens and public authorities, better involving citizens in local decision-making and contributing to change in operational culture and attitudes within public administrations. As a follow-up project, eCitizen II brought added-value to interregional eGovernment cooperation focusing on sharing the accumulated knowledge, experiences, best practices, and transferring them between the more advanced and less experienced cities and regions throughout Europe. The online manual is available on www.eparticipation.eu