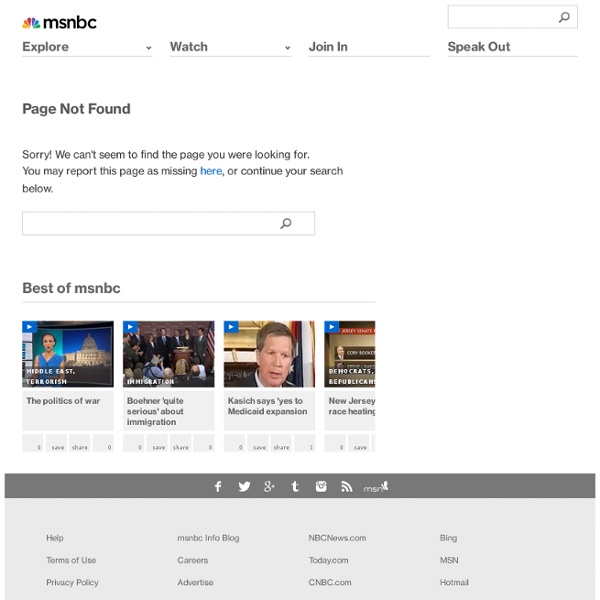 Rest Of The World Thinks Congress Is A ‘Laughing Stock' For Government Shutdown John BoehnerSpeaker of the House Rep. John Boehner, R-Ohio, pumps his fist as he walks past reporters after a meeting with House Republicans on Capitol Hill on Wednesday, Oct. 16, 2013 in Washington. (AP Photo/ Evan Vucci)Mitch McConnellSenate Minority Leader Sen. Mitch McConnell, R-Ky., walks to the Senate floor after agreeing to the framework of a deal to avoid default and reopen the government on Capitol Hill on Wednesday, Oct. 16, 2013 in Washington. Occupy Wall Street: The Most Important Thing in the World Now I was honored to be invited to speak at Occupy Wall Street on Thursday night. Since amplification is (disgracefully) banned, and everything I say will have to be repeated by hundreds of people so others can hear (a k a “the human microphone”), what I actually say at Liberty Plaza will have to be very short. With that in mind, here is the longer, uncut version of the speech. We Recommend

Dirty Girls and Bad Feminists: A Few Thoughts on “I Love Dick” There’s a moment in almost any bad memoir where you start to get the sense that the author is telling you more than he or she actually wants you to know; a moment where the author’s persona, carefully crafted to be winning or fun or poignant or survivorly and magnificently victimized, starts to slip, and you get the sense of a different person trying to speak. This person is less glamorous, or less admirable, or less disgusting, or meaner, or nicer than the person the author is trying to sell you; they’re less fit to be written down. Probably they’re more embarrassing. Must-Read Weekend Reading It’s Only A Crisis If You’re A King. A lot of people keeping using the word “crisis” to describe our macro economic, social, political changes. This essayist, Anand Giridharadas, whom I’ve written of before, has written a piece around this that captures an interpretation I believe in. ” [What we’re experiencing is a] shift in the nature of power and influence. It goes by many names and takes many forms.

Ellmers reverses course, will decline her paycheck amid shutdown Republican U.S. Rep. Renee Ellmers said Friday she would decline her $174,000 congressional salary during the federal government shutdown, reversing course after facing intense pressure. Ellmers sent a letter to House officials asking for her pay to be withheld, saying in a statement she would “stand with all federal workers.” Two days earlier, the Dunn lawmaker had refused to decline her paycheck like many of her Republican and Democratic colleagues during the shutdown, telling a Raleigh TV station, “I need my paycheck. That is the bottom line.”

Alex Dally MacFarlane Oh R Scott Bakker will you just shut up. My recent post about passion and The Wild Girls was inspired by R Scott Bakker’s recent idiocy (Nick Mamatas has a handy index of the first 3 posts), but I wanted to take my feelings about that and spin it into something positive, focusing on Le Guin and passion and getting it right instead of Bakker’s foolishness. Alas, no longer. After claiming it was all a social experiment (lol, really), he is now claiming he knew he’d lose from the beginning. Everyone has proved his point by not ~actually responding~ to his arguments (calling them stupid isn’t a response, I guess) and joining in the big sheep-like group because it’s easy (are the people siding with him also choosing the easy route, one wonders?). But then he goes beyond inanity into shitfuckery.

Will U.S. Army Be Used to Crush Public Resistance? By Keith Johnson - The Alternative Futures Symposium in Chantilly, Va. was all part of the U.S. Army’s Unified Quest 2012 exercise, the latest in a series of annual war games that in recent years has focused on America’s response to a global financial meltdown in which average citizens took to the streets en masse. In November 2010, CNBC’s Eamon Javers had this to say about last year’s exercise: “Ever since the crash of 2008, the defense-intelligence establishment has been paying a lot of attention to global markets and how they can serve as a threat to U.S. national security interests.” Javers went on to report: “The Army is having a very interesting yearlong exercise called Unified Quest 2011.

A Federal Budget Crisis Months in the Planning Michael Stravato for The New York Times "You are here because now is the single best time we have to defund Obamacare. This is a fight we can win." Delaware judge dismisses Goldman Sachs pay claims The New York investment bank Goldman Sachs is known for, among other things, paying its executives pretty well. CEO Lloyd Blankfein, for example, was awarded a $67.9 million bonus in 2007, the same year the firm set a Wall Street pay record. Criticism over Goldman’s pay practices found its way into Delaware’s highly-regarded business court system recently, with investors claiming that the bank’s compensation practices are unfair. Lawyers for the Southeastern Pennsylvania Transportation Authority and the International Brotherhood of Electrical Workers union argued that the pay practices, which tethered bonuses to net revenue, provided a boon to executives in good times but stuck shareholders with the bill in bad times. Goldman, Blankfein and other officers and directors were named as defendants in the suit, which was dismissed by Delaware Chancery Court Judge Sam Glasscock III on Wednesday. Last year, Goldman agreed to pay $550 million to settle allegations levied by the U.S.

How Your Cat Is Making You Crazy - Kathleen McAuliffe No one would accuse Jaroslav Flegr of being a conformist. A self-described “sloppy dresser,” the 53-year-old Czech scientist has the contemplative air of someone habitually lost in thought, and his still-youthful, square-jawed face is framed by frizzy red hair that encircles his head like a ring of fire. Certainly Flegr’s thinking is jarringly unconventional. Starting in the early 1990s, he began to suspect that a single-celled parasite in the protozoan family was subtly manipulating his personality, causing him to behave in strange, often self-destructive ways. And if it was messing with his mind, he reasoned, it was probably doing the same to others. The parasite, which is excreted by cats in their feces, is called Toxoplasma gondii (T. gondii or Toxo for short) and is the microbe that causes toxoplasmosis—the reason pregnant women are told to avoid cats’ litter boxes.

Obama’s Pepper Spraying Cops The growing number of video clips and photos showing police in Darth Vader-like riot gear assaulting peaceful demonstrators with everything from tear gas and mace to truncheons, point-blank shots with beanbags and rubber bullets, and of course the ubiquitous fist and club, have made a bad joke out of claims that America is either the land of the free or the home of the brave. Scott Olson, a veteran of America’s Iraq War, suffered a severe brain injury that nearly killed him, and left him with difficulty speaking, thanks to a shot to his head by an attacking police officer in Oakland who was firing teargas canisters from a gun-like weapon. Olsen is lucky to be alive and will hopefully recover over time.

Opinion: Shutdown a huge waste and cost to science The Statue of Liberty looms over visitors below on Liberty Island in New York Harbor on Sunday, October 13. The statue was closed to the public by the federal government's partial shutdown that began October 1, but reopened Sunday after the state of New York agreed to shoulder the costs of running the site during the shutdown. Many government services and agencies remain completely or partially closed. The main entrance to Grand Canyon National Park remains closed to visitors in Grand Canyon, Arizona, on Thursday, October 10. Under pressure from several governors, the Obama administration said Thursday it will allow some shuttered national parks to reopen, as long as states use their own money to pay for park operations.