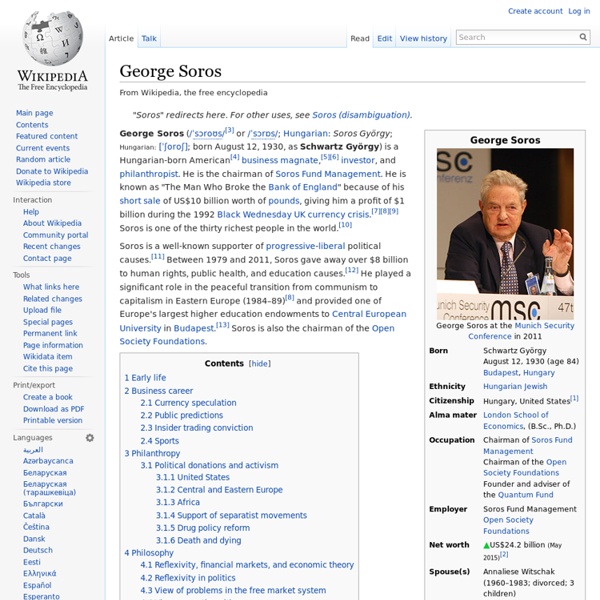 Soros is a well-known supporter of progressive-liberal political causes.[11] Between 1979 and 2011, Soros gave away over $8 billion to human rights, public health, and education causes.[12] He played a significant role in the peaceful transition from communism to capitalism in Eastern Europe (1984–89)[8] and provided one of Europe's largest higher education endowments to Central European University in Budapest.[13] Soros is also the chairman of the Open Society Foundations. Early life[edit] The Jewish Council asked the little kids to hand out the deportation notices. I was told to go to the Jewish Council. And there I was given these small slips of paper ... It said report to the rabbi seminary at 9 am ... Soros did not return to that job, but instead went into hiding the next day. Soros emigrated to England in 1947 and became an impoverished student at the London School of Economics.[22] While a student of the philosopher Karl Popper, Soros worked as a railway porter and as a waiter.

Freedom House As of 2010, grants awarded from the US government accounted for most of Freedom House's funding;[5] the grants were not earmarked by the government but allocated through a competitive process. The organization is directed by David J. Kramer, former head of the Bureau of Democracy, Human Rights, and Labor of the United States Department of State. History[edit] Freedom House was founded in October 1941. After the war, as its website states, "Freedom House took up the struggle against the other twentieth century totalitarian threat, Communism.... The organization describes itself currently as a clear voice for democracy and freedom around the world. has vigorously opposed dictatorships in Central America and Chile, apartheid in South Africa, the suppression of the Prague Spring, the Soviet war in Afghanistan, genocide in Bosnia and Rwanda, and the brutal violation of human rights in Cuba, Burma, the People's Republic of China, and Iraq. Organization[edit] Reports[edit] Other reports[edit]

International Republican Institute Founded in 1983, the International Republican Institute (IRI) is an organisation, funded by the United States government, that conducts international political programs, sometimes called 'democratization programs'.[2] Initially known as the National Republican Institute for International Affairs, the IRI's stated mission is to "expand freedom throughout the world". Its activities include teaching and assisting with right-wing political party and candidate development in their values, "good governance" practices, civil society development, civic education, women’s and youth leadership development, electoral reform and election monitoring, and political expression in closed societies. It has been chaired by former presidential candidate John McCain since January 1993.[1][3] Background[edit] The IRI is a non-profit, non-partisan organization founded in 1983 after U.S. The Westminster speech led to the establishment of the National Endowment for Democracy by Congress in 1983. Activities[edit]

Open Society Institute One of the aims of the OSF is the development of civil society organizations (e.g., charities and community groups) to encourage participation in democracy and society.[1] The name is inspired by Karl Popper's 1945 book The Open Society and Its Enemies.[2] History[edit] Initiatives[edit] Related initiatives include the Open Society Initiative for West Africa (OSIWA) and the Open Society Initiative for Southern Africa (OSISA). Recent efforts have included those that have met with controversy, including an effort in the African Great Lakes region aimed at spreading human rights awareness among prostitutes in Uganda and other nations in the area. Activities by regions[edit] According to the 2009 OSF expenditures report,[12] Africa region (outside of South Africa) was the key area of funded activities: about $51,000,000 were spent on civil society support, human rights, education, justice, media, public health, transparency, and other activities there. Criticism[edit] See also[edit]

National Democratic Institute for International Affairs Logo of the NDIFIA The National Democratic Institute for International Affairs (NDI) is an organization created by the United States government by way of the National Endowment for Democracy (NED) to channel grants for furthering democracy in developing nations. It was founded in 1983, shortly after the U.S. Under its mission, "NDI provides practical assistance to civic and political leaders advancing democratic values, practices and institutions. Critics charge that the term "democracy assistance" and "democracy building" are rhetorically employed to overpower nationalist and socialist resistance to US economic and cultural domination, particularly in Russia.[5] NDI Board of Directors & Senior Advisory Committee[edit] The Institute regularly researches and releases reports on global democratic political developments in conjunction with think tanks, NGOs, and civic organizations. See also[edit] Notes[edit] Further reading[edit] External links[edit] National Democratic Institute

National Endowment for Democracy The President of the National Endowment for Democracy, Carl Gershman(pictured, second from the left), presents an award to a Tunisian leader of the Arab Spring in November 2011. The National Endowment for Democracy (NED) is a U.S. non-profit soft power organization that was founded in 1983 to promote democracy. It is funded primarily through an annual allocation from the U.S. Congress, within the budget of USAID, the U.S. agency for development assistance, which is part of the U.S. History[edit] Founding[edit] A bill was introduced in April 1967 by Congressman Dante Fascell (D,FL) to create an institute of International Affairs. In a 1982 speech at the Palace of Westminster, President Ronald Reagan proposed an initiative, before the British Parliament, "to foster the infrastructure of democracy—the system of a free press, unions, political parties, universities." Later history[edit] Overview[edit] Source of funding[edit] Board[edit] Activities[edit] Central America[edit] China[edit] Iran[edit]

United States Agency for International Development The United States Agency for International Development (USAID) is the United States federal government agency primarily responsible for administering civilian foreign aid. USAID seeks to "extend a helping hand to those people overseas struggling to make a better life, recover from a disaster or striving to live in a free and democratic country."[3] It operates in Africa, Asia, Latin America and Europe. President John F. On 3 April 2014 the Associated Press published findings of an investigation showing how USAID engineered a program involving the creation of a Twitter-like communications network called ZunZuneo aimed at fueling political dissent to trigger a Cuban uprising.[5] Goals[edit] USAID's decentralized network of resident field missions is drawn on to manage US government (USG) programs in low-income countries for a range of purposes.[6] Disaster reliefPoverty reliefTechnical cooperation on global issues, including the environmentU.S. bilateral interestsSocioeconomic development

Otpor! Otpor! logo Origins[edit] Initial activity[edit] An Otpor! In the beginning, Otpor's activities were limited to the University of Belgrade. The organization quickly gained prominence as the anti-regime print media outlets (most notably daily tabloid Dnevni telegraf) started featuring the clenched fist symbol in open defiance of regime's new information law. During the NATO air-strikes against FR Yugoslavia in 1999 regarding the Kosovo War, Otpor! Organization grows into a movement[edit] A non-partisan, but overtly anti-regime organization with a loose and dynamic structure, Otpor managed to bring opposition parties together and mobilize the population of Serbia against Milošević. The strategy was based on two assumptions: That the opposition had to be united around one presidential candidate in order to get more votes than Milošević; andThat Milošević would never accept defeat in the elections (and he would falsify ballots and even use force to defend his power).[9] Otpor! Tactics[22][edit]

Gene Sharp Gene Sharp (born January 21, 1928) is the founder of the Albert Einstein Institution, a non-profit organisation dedicated to advancing the study of nonviolent action, and Professor Emeritus of political science at the University of Massachusetts Dartmouth.[3] He is known for his extensive writings on nonviolent struggle, which have influenced numerous anti-government resistance movements around the world. Gene Sharp has been nominated three times for the Nobel Peace Prize in 2009, 2012 and 2013.[4][5][6][7] Sharp was widely considered the favourite for the 2012 award.[8][9][10] In 2011 he was awarded the El-Hibri Peace Education Prize.[11] In 2012 he was a recipient of the Right Livelihood Award [12] as well as the Distinguished Lifetime Democracy Award.[13] Biography[edit] Sharp has been a professor of political science at the University of Massachusetts Dartmouth since 1972. Sharp's contributions to the theory of nonviolent resistance[edit] Sharp's influence on struggles worldwide[edit]

Orange Revolution The Orange Revolution (Ukrainian: Помаранчева революція, Pomarancheva revolyutsiya) was a series of protests and political events that took place in Ukraine from late November 2004 to January 2005, in the immediate aftermath of the run-off vote of the 2004 Ukrainian presidential election which was claimed to be marred by massive corruption, voter intimidation and direct electoral fraud. Kiev, the Ukrainian capital, was the focal point of the movement's campaign of civil resistance, with thousands of protesters demonstrating daily.[5] Nationwide, the democratic revolution was highlighted by a series of acts of civil disobedience, sit-ins, and general strikes organised by the opposition movement. In 2010 Yanukovych became Yushchenko's successor as Ukrainian President after the Central Election Commission and international observers declared that the presidential election were fairly conducted.[7] Background[edit] Gongadze assassination/Kuchmagate crisis[edit] Pora! Protests[edit]