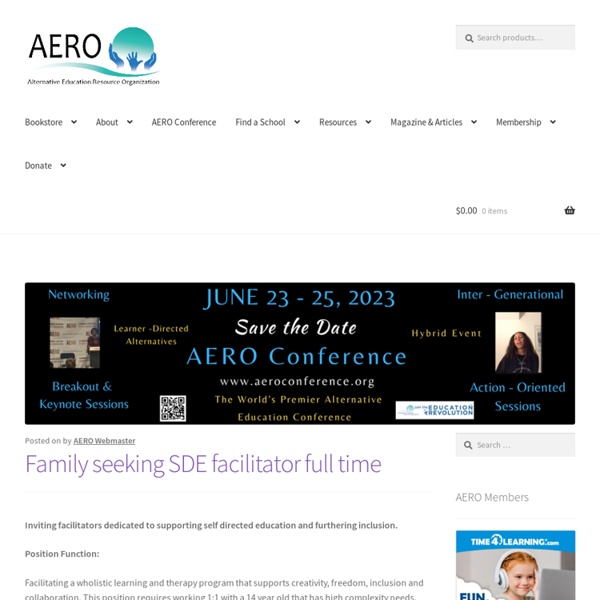 The Brooklyn Free School assistant teachers support the work of the teachers, including managing daily activities, outdoor play and lunch routines. Brooklyn Free School engages… Agile Learning Centers Why? In a world where all information is at your fingertips we understand that success relies not on your ability to memorize or… We are seeking applicants for a director of development and operations, and a marketing director. You can learn more about the responsibilities and qualifications for…

Amelia Marzec: Education and Activism in Alternative Schools In an Occupy-saturated New York, there's a push for education by the people for the people that calls for new structures of collaboration and new uses of resources. But two organizations, The Public School and Trade School, were in play well before the first tent ever popped up in Liberty Square. Designed by artists and organized without curriculums, classes range from philosophy and time travel to mushroom hunting and stilt walking. They won't be churning out bridge-building engineers, but illustrate a dream of collective education.

Full-Service Schools: A Revolution in Health and Social Services for Children, Youth, and Families. The movement to provide an array of integrated support services in schools in response to social problems is described, and suggestions are made for increasing these activities. Although such social problems as poverty, drugs, violence, and stress are not unique to urban schools, they are unquestionably found in our cities, and many city schools have taken the lead in providing needed health screening, psychological counseling, drug prevention counseling, parent education, and other important services, including family planning information. Examples of programs in Baltimore (Maryland) and Denver (Colorado) illustrate early efforts for school-based services. In Pittsburgh (Pennsylvania) the move toward school-based services has taken a partnership approach to involve other agencies. In Boston (Massachusetts), the Washington Heights area of New York City, and Modesto (California), school-based programs have reflected new government and community initiatives.

Keep Up with Your Quants “I don’t know why we didn’t get the mortgages off our books,” a senior quantitative analyst at a large U.S. bank told me a few years ago. “I had a model strongly indicating that a lot of them wouldn’t be repaid, and I sent it to the head of our mortgage business.” When I asked the leader of the mortgage business why he’d ignored the advice, he said, “If the analyst showed me a model, it wasn’t in terms I could make sense of. Links - A.S Neill's Summerhill School www.gov.uk/government/organisations/uk-visas-and-immigration Non-EU Nationals will need to apply for a child student visa to be able to study in the UK at Summerhill; we are an approved education provider under Tier 4. This link provides full information on how to make an application. www.eudec.org The European Democratic Education Community.

the 7-lesson schoolteacher John Taylor Gatto The 7-Lesson Schoolteacher by John Taylor Gatto New Society Publishers, 1992 Call me Mr. Gatto, please. Twenty-six years ago, having nothing better to do at the time, I tried my hand at schoolteaching. Online Library. Starting a School From Starting a Sudbury School What Gets Folks Going From Starting a Sudbury School How Founder Groups Get Formed From Starting a Sudbury School By Daniel Greenberg and Mimsy Sadofsky What Gets Folks Going Inequality: A Reassessment of the Effect of Family and Schooling in America. The results and interpretation of three years of research into inequality are presented in this book. Chapters cover these topics: (1) from equal opportunity to equal results; (2) inequality in the schools--access to schools and colleges, expenditure differences between schools and individuals, access to privileged school mates, and access to fast classes and college curriculums; (3) inequality in cognitive skills--the nature and extent of cognitive inequality, the heredity/environment controversy, schooling and cognitive inequality; (4) a note on noncognitive traits; (5) inequality in educational attainment--the effects of economic background, race, and family background, academic aptitude and academic credentials, and the effects of school quality, high school resources, segregation, and curriculum placement; (6) inequality in occupational status; (7) income inequality; (8) inequality in job satisfaction; and (9) what can be done.

Getting Government Beyond Innovation One-Offs In pulling together this week’s Mayors Innovation Summit, Philadelphia Mayor and U.S. Conference of Mayors President Michael Nutter is responding to exploding interest from city leaders to create a radically new kind of local government: one that’s consistently good at embracing new ideas. The desire to do things differently is why the mayors in Riverside (CA), Kansas City (MO), and Nashville are among the most recent to appoint Chief Innovation Officers. It’s why Code for America, the San Francisco-based organization that connects young technologists with city halls to spur innovation, can barely keep up with demand from cities. Of course we already see a lot of innovation coming out of America’s city halls. Creative, dedicated public servants solve problems and tweak existing services on a routine basis.

AT&T, Feds Neglect Low-Price Mandate Designed to Help Schools A decade after the program started, AT&T was still not training its employees about the mandatory low rates, which are supposed to be set at the lowest price offered to comparable customers. Lawsuits and other legal actions in Indiana, Wisconsin, Michigan and New York have turned up evidence that AT&T and Verizon charged local school districts much higher rates than it gave to similar customers or more than what the program allowed. AT&T has charged some schools up to 325 percent more than it charged others in the same region for essentially the same services. Verizon charged a New York school district more than twice as much as it charged government and other school customers in that state. The companies say they comply with the rules of the program, known as E-Rate. Meanwhile, the federal government has made scant effort to enforce the requirement that companies give the preferential rate to schools.

How Children Succeed: Grit, Curiosity, and the Hidden Power of Character - Paul Tough “Drop the flashcards—grit, character, and curiosity matter even more than cognitive skills. A persuasive wake-up call.”—People Why do some children succeed while others fail?