Must read by @tomforemski: Foxconn suicides: Time for 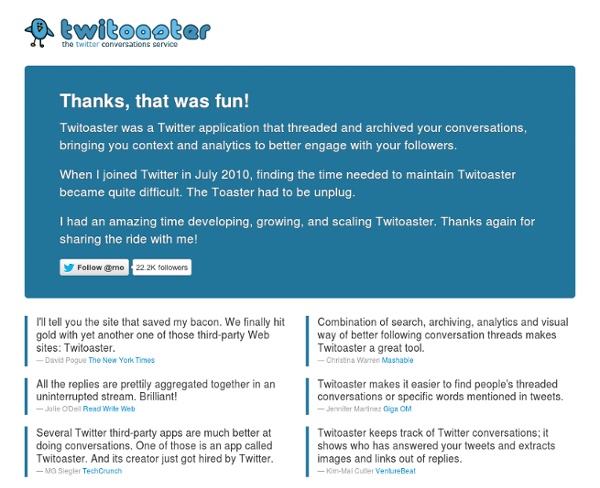 46 suicides at France Telecom, 9 at Foxconn - the human cost of Foxconn, the Chinese manufacturer of electronics products for Apple and many others, has reported 9 suicides among its workforce and is fighting allegations of being a sweatshop. It's not the only tech company with a suicide problem, France Telecom's is much higher, with 46 suicides, and now a government investigation. Both sets of suicides are blamed on work place stress. The Real Truth Behind Foxconn’s Suicide Cluster » M.I.C Gadget

“Hypergrid Adventurers Club” Homepage *** UPDATE – 7/29/2014 – PLEASE READ *** The Hypergrid Adventurers Club is no longer meeting regularly. Please check out the Hypergrid Safari for information on a new group that is conducting weekly tours across the Metaverse. See you there! **************************************************** Interested in exploring Opensim and interconnected Virtual Worlds? 30+ More Ways to Create Twitter Groups Earlier this year we showed you how to create groups for Twitter. While the post is still a valuable resource, we've definitely seen a few new tools pop up that are also worth a look. When it comes to Twitter groups, you're probably either interested in ways to communicate with a distinct set of users, or following a group of tweets based on Twitterer, topic, or hashtag. We've identified and separated out the web, desktop, and mobile apps that help you satisfy the group function of your choosing. Participate in Public or Private Twitter Groups If you're looking to create Twitter groups that allow for public or private communication between multiple Twitterers, you've definitely got a few choices.

Twitter's Most Active Users: Bots, Dogs, and Tila Tequila Only 5% of Twitter's users account for 75% of all the activity on the service, and almost one third of all the tweets posted by the most active users come from bots that each generate more than 150 tweets per day. According to a new report from Sysomos, the up-and-coming social media monitoring and analytics service, one quarter of all the messages posted on Twitter are currently generated by bots. Some of these are obviously spambots, though a large number of bots are also run by legitimate organizations, including @diggupdates, @imdb, and @dogbook, which posts updates from pets on Facebook to Twitter. Twitter's Most Active Users in Detail Sysomos's Alex Cheng and Mark Evans decided to take a closer look at the top 5% of Twitter's most active users, and the results of their study are quite interesting.

Foxconn suicides: Time for fair trade electronics? Would you buy A Fair Trade notebook? - image by Damien Van Achter The suicides at Foxconn have highlighted the issue of highly stressful working conditions in the global electronics industry. Foxconn has responded with psychologists, punch bags, swimming pools, and asking employees to promise not to kill themselves. But these moves do nothing to change the actual working conditions. Opensim in education (with alpha software)- lessons learned just some quick notes… so i don’t forget them. More will get posted at openhabitat. Well… for those of you following, the second run at it went MUCH better than the first one. HOW TO: Start a Petition on Twitter Petitions are one of the most valuable tools organizers have to gather support for a cause and demonstrate the strength behind it. Even if they're not always ultimately successful in enacting their goal, petitions are an amazing way to bring people together around an issue, spread awareness, and show others how many people care about a cause. The web has made petitions easier to execute, by replacing knocking on doors with a clipboard and pen with emailing supporters a link, and Twitter has now made them more likely to go viral.

And The Winners Are… — Sunlight Foundation Blog Judging our first Apps for America contest was difficult: 40+ solid, open source applications that solidly moved the ball forward in terms of opening government and providing new methods of communicating to our legislative branch. The entries ranged from highly technical Bayesian prediction tools like Words Vote, to the super simple and super useful GovPix. Every entry presented was open source and and amazing commitment on behalf of the development community to open their government. Every single entrant was amazing and I wish we could give prizes to everyone. But we can't. The rules say there's 1 prize for first place, 1 prize for second place, 4 third place prizes and 10 honorable mentions prizes.

Who will be the first "Fair Trade" tech company? Moving beyond " There's a tremendous opportunity waiting to be grabbed. There's a Wikipedia page waiting to be written. "The first Fair Trade tech company was ..." I'm certain that the Fair Trade concept will be applied to electronics, and it's just a matter of when that will happen. I'm convinced it will happen because it's a good idea. Opensim/Drupal integration for education – proposal and call for help Well… i’m finally getting my teeth back into opensim and finding that there are a couple of things i’d like to get built over the next couple of months. We’ve already gotten a good start on the automated installer for opensim, but what i’d really like to do now is attempt an integration with drupal. I’ll be keeping my running requirements list for that integration on the openhabitat project page and will hopefully pop a few updates into here from time to time.

Topsy - A search engine powered by tweets With iOS 9, Search lets you look for content from the web, your contacts, apps, nearby places, and more. Powered by Siri, Search offers suggestions and updates results as you type. There are two ways to use Search on your iOS device. Quick Search Drag down from the middle of the Home screen and type what you're looking for. Siri Suggestions