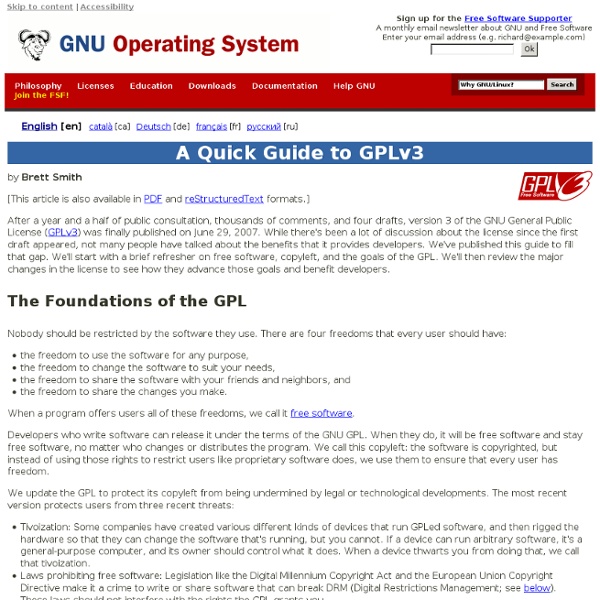 by Brett Smith [This article is also available in PDF and reStructuredText formats.] After a year and a half of public consultation, thousands of comments, and four drafts, version 3 of the GNU General Public License (GPLv3) was finally published on June 29, 2007. While there's been a lot of discussion about the license since the first draft appeared, not many people have talked about the benefits that it provides developers. We've published this guide to fill that gap. We'll start with a brief refresher on free software, copyleft, and the goals of the GPL. The Foundations of the GPL Nobody should be restricted by the software they use. the freedom to use the software for any purpose,the freedom to change the software to suit your needs,the freedom to share the software with your friends and neighbors, andthe freedom to share the changes you make. When a program offers users all of these freedoms, we call it free software. Protecting Your Right to Tinker Clarifying License Compatibility

Pourquoi l'« open source » passe à coté du problème que soulève le logiciel libre by Richard Stallman When we call software “free,” we mean that it respects the users' essential freedoms: the freedom to run it, to study and change it, and to redistribute copies with or without changes. This is a matter of freedom, not price, so think of “free speech,” not “free beer.” These freedoms are vitally important. They are essential, not just for the individual users' sake, but for society as a whole because they promote social solidarity—that is, sharing and cooperation. Free software is a matter of liberty, not price As our society grows more dependent on computers, the software we run is of critical importance to securing the future of a free society. Free software is about having control over the technology we use in our homes, schools and businesses, where computers work for our individual and communal benefit, not for proprietary software companies or governments who might seek to restrict and monitor us. The Free Software Foundation exclusively uses free software to perform its work. The Free Software Foundation is working to secure freedom for computer users by promoting the development and use of free (as in freedom) software and documentation—particularly the GNU operating system—and by campaigning against threats to computer user freedom like Digital Restrictions Management (DRM) and software patents. Our Core Work

The History of Tux the Linux Penguin - Wikiid [Tux] "...looks too much like Homer Simpson" -- Albert Cahalan. ...Just when you thought that Tux was about as cute as he could possibly be... Thanks to Paul and Eleya Frields for these photos of Evelyn-the-Penguin. So cute! The GNU Manifesto - GNU Project The GNU Manifesto (which appears below) was written by Richard Stallman in 1985 to ask for support in developing the GNU operating system. Part of the text was taken from the original announcement of 1983. Through 1987, it was updated in minor ways to account for developments; since then, it seems best to leave it unchanged. Since that time, we have learned about certain common misunderstandings that different wording could help avoid. Footnotes added since 1993 help clarify these points.

Pourquoi les écoles doivent utiliser exclusivement du logiciel libre - Projet GNU - Free Software Foundation (FSF) Education → In Depth → Why Schools Should Exclusively Use Free Software by Richard Stallman Educational activities, including schools of all levels from kindergarten to university, have a moral duty to teach only free software. All computer users ought to insist on free software: it gives users the freedom to control their own computers—with proprietary software, the program does what its owner or developer wants it to do, not what the user wants it to do. Free software also gives users the freedom to cooperate with each other, to lead an upright life. These reasons apply to schools as they do to everyone. What is Copyleft? Copyleft is a general method for making a program (or other work) free, and requiring all modified and extended versions of the program to be free as well. The simplest way to make a program free software is to put it in the public domain, uncopyrighted. This allows people to share the program and their improvements, if they are so minded.

The Legacy of Linus Torvalds: Linux, Git, and One Giant Flamethrower Linus Torvalds. Photo: Jon Snyder/Wired Linus Torvalds created Linux, which now runs vast swathes of the internet, including Google and Facebook. And he invented Git, software that’s now used by developers across the net to build new applications of all kinds. But that’s not all Torvalds has given the internet. He’s also started some serious flame wars. Linus Torvalds: I will not change Linux to “deep-throat Microsoft” The Linux kernel development process may welcome all those who love open source software and have the right coding chops, but one man remains the ultimate authority on what does and doesn't go into Linux—and he isn't afraid to let everyone know it. The rants of Linux creator Linus Torvalds often become public through the Linux Kernel Mailing List archive. That's the open source way, and it gives us a glimpse into the thinking of the people behind one of the world's most widely used technologies. The latest example comes from an argument between Torvalds and other Linux developers over whether the Linux kernel should include code that makes it easier to boot Linux on Windows PCs. This goes back to Microsoft requiring that PCs designed to run Windows 8 use UEFI firmware with the Secure Boot feature enabled. This has complicated the process of booting Linux on PCs that shipped with Windows 8, but it hasn't prevented people from doing so.

Linux and GNU by Richard Stallman Many computer users run a modified version of the GNU system every day, without realizing it. Through a peculiar turn of events, the version of GNU which is widely used today is often called “Linux”, and many of its users are not aware that it is basically the GNU system, developed by the GNU Project. There really is a Linux, and these people are using it, but it is just a part of the system they use.