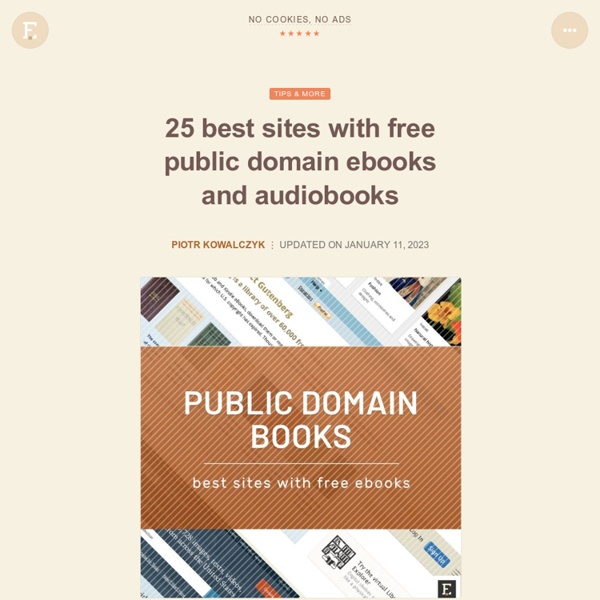 This is an updated list of sites that offer free public domain books in electronic and audio format. Every year new publications enter public domain. That means their intellectual property rights have expired or are not applicable any longer. The content of these works becomes available for public use. Anyone is free to use it – but also to reuse it, for instance publish a new edition. Therefore you may find in major ebookstores (Kindle, Nook, Kobo, iBook Store, or Google Play Books) public domain books that are not free. My advice is that if you want to get an ebook version of a classic novel like Pride and Prejudice, you should first check out the sites listed below. The dates books enter public domain vary between countries. This list will be updated yearly. Recommended overview: 50 awesome posters that encourage to read Art prints / Instant downloads A list of most awesome read posters from Etsy, Zazzle, Redbubble, Society6 and AllPosters. Free public domain books – 25 sources 1. 2. 3.

6 tips for making better iPad movies Apple's recent iPad ad glimpsed at how you can use the device to capture interesting video footage -- but you can improve projects using this handpicked selection of software and accessories. [ABOVE: MovieMount explainer.] Hot hardware 25 Great Works of Erotic Literature to Keep You Warm on Cold Winter Nights It’s getting cold out there, and though there are a few ways of keeping warm, one which most people don’t talk about is reading a steamy book. But it can be hard to choose the right one. Most people want a book that doesn’t carry the shame of the E.L.

i heart intelligence FREE BOOKS: 100 legal sites to download literature Looking for the next great book to sink your teeth into? Look no further. Below are over 100 links to websites that provide free e-books on a huge variety of topics. Top 10 movie-making apps for iPhone and iPad The concept of making movies covers an incredibly wide spectrum. It doesn't matter if you're just doing holiday films with the family or working behind the scenes on a multi-million dollar mega-hit - your iOS device can be a major help. Though you're unlikely to see Christopher Nolan's next film shot on an iPhone, there's a real chance you might see something at a film festival taken on a 4S, or a local documentary uploaded to sites like YouTube. If you're just filming something that's happening around you, the Camera app and iMovie might be all you need to turn it into a great little video.

The Online Books Page: Archives and Indexes General -- Non-English Language -- Specialty There's a vast range of online literature beyond what we index individually on The Online Books Page. Below we list some of the major sources and indexes of free online texts, in all languages, both general and specialized. General Search Engines:Online Catalogs From Topical Search Wiki IMDb - The Internet Movie Database CharacTour – A characters database Books Journals CiteULike - A Web2.0 references management website that incorporate folksonomy and fulltext links to open as well as close access websites. (In order to make the metadata as accurate as possible its search engine is limited by defaulte to authenticated reference.)

endorsements: Richard Siken; Crush I finally got a hold of Richard Siken's Crush, almost one whole year after I discovered him. I gotta say - I was not disappointed. There is such a strong feeling of interconnectedness between his poems, so many repeated images and themes (the chlorinated pool, swallowing glass, a film called the Planet of Love, golden light, a man named Henry). Because of this, there is a smooth flow from poem to poem, and the more you read, the more you'll love him. I have spent roughly six hours or so (chemistry assessment task be damned!) 4 Sites with LOTS Of Completely Free Ebooks That Don't Suck If you’re a fervent reader and nerd like I am, you’ve probably encountered quite a lot of writing online. However, most of them are either absolute garbage or entirely illegal. It’s hard to find good, legal reads online – unless you know where to look. There are several sites that offer classic out-of-copyright writing, or publishes new e-books online as promotions. If you know where to look, you can feast on these completely free Ebooks for all the time you’ve got, and today is the day we’ll show you where to look. Planet eBook

5 Apps for Making Movies on Mobile Devices Every year at Hollywood award shows, we see fantastic movies celebrated for their rich storytelling and dynamic performances. Your students can become moviemakers, too, thanks to some powerful apps for mobile devices. With these tools, your children can take videos and edit their work to make professional quality movies using iOS devices (iPads and iPhones) and Android tablets.

Libraries Test a Model for Setting Monographs Free – Wired Campus - Blogs Librarians love to get free books into the hands of scholars and students who need them. Publishers love it when their books find readers—but they also need to cover the costs of turning an idea into a finished monograph. Now a nonprofit group called Knowledge Unlatched is trying out a new open-access model designed to make both librarians and publishers happy. Here’s how the “unlatching” works: Participating libraries pick a list of scholarly books they want to make open access. They pool money to pay publishers a title fee for each of those books. The title fees are meant to cover the cost of publishing each book; publishers calculate what they think is fair and share those estimates with the Knowledge Unlatched group.

Search Engines:Digital Libraries From Topical Search Wiki General Resources digital libraries Aggregators The Digital Public Library of America (DPLA) – A front end interface to US and international digital archives that intendend to make them accessible to the general public. OAIster – A multilingual catalog of open and limited access online materials, that was built by harvesting from collections worldwide using the Open Archives Initiative Protocol for Metadata Harvesting (OAI-PMH). The World Wide Library (WDL) – An international digital library operated by UNESCO and the United States Library of Congress.